Greatly supporting the military-industrial complex and these Saudi bastards! 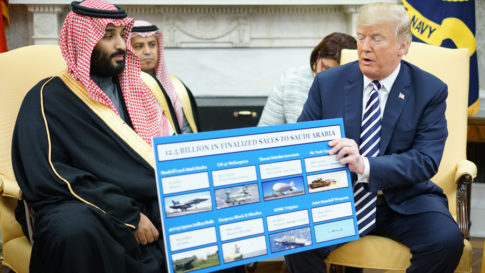 – ‘Peanuts for you’: Trump showcases weapons US sold to Yemen-bombing Saudi prince (VIDEO):

US President Donald Trump brought several pictures of American weapons to a meeting with visiting Crown Prince Mohammad bin Salman of Saudi Arabia. He boasted of multibillion-dollar sales of arms to the kingdom.

Showing a sign to journalists at the meeting that read “12.5 billion in finalized sales to Saudi Arabia,” Trump boasted about all the money that US defense contractors would be getting for their products. 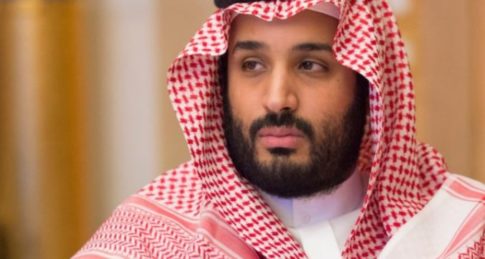 – Saudi Royal Reportedly Tortured To Death After Refusing To Fork Over His Fortune:

Rumors that Saudi Crown Prince Mohammad bin Salman has hired mercenaries to torture recalcitrant royals sleeping in the ballroom of the Ritz Carlton in Riyadh have been circulating since shortly after last month’s “corruption crackdown” naked cash grab.

Now, Middle East Eye reports that one of MbS’s guests has reportedly died under torture rather than fork over his money and assets to his domineering relative. He was reportedly beaten and tortured so bad his family members had difficulty recognizing his body.

Blackwater founder Eric Prince is a Knight of Malta.

Mohammed bin Salman (MBS) is a friend of Jared Kushner.

Arrests have been made immediately AFTER Kushner and Trump officials secretly visited Saudi Arabia.

Donald Trump’s top foreign adviser and friend Joseph Schmitz is not just a former boss of Blackwater, but also a Knight of Malta.

It is all a show!

As I’ve told you before the election…

Trump is a Freemason and Illuminati puppet, just like the Bushs, the Clintons, Obama, Merkel, May, Macron, etc.

If I had to guess, then I would say that all of this is possibly about getting rid of people that would NOT 100% support the coming great war (WW3), leading to the total destruction of their country and its people, which is quite the opposite of what some mainstream and alternative news outlets want to tell us.

What I am totally convinced is, is that all of this is done in preparation for WW3.

– The MBS – Blackwater marriage of convenience:

Mohamed Bin Salman’s (MBS) royal Saudi coup is still in the making and its stories of mystery and intrigue are unfolding.

Some recent articles written about this unprecedented Saudi development have focused on whether or not MBS was actually desirous of instigating reform within the kingdom of sand and capable of putting together the infrastructure that made such reform possible and how. Other more cynical articles have cast little doubt on his ability to create any change and classified him as yet another puppet of the legacy that his grandfather King Abdul Aziz, the founder of the Saudi dynasty, has forged with the West. In between the two extremes, many perhaps waited in anticipation to see what was to happen next in the now quick-changing kingdom that did not change at all in essence for nearly a hundred years.

To put recent developments into perspective, we must objectively look at MBS’s achievements and failures since his rise to prominence; with a special emphasis on the developments of the last few weeks. 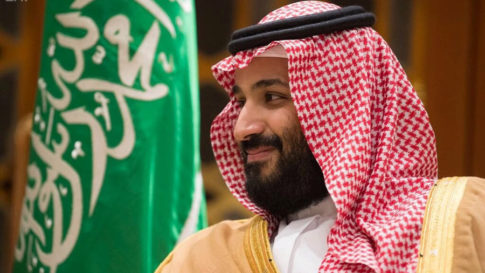 If you know that the Saudis belong to the Khazarian mafia, then suddenly everything does make sense…

Clearly the war in Syria and the international push for regime change against Assad has created strange alliances in the Middle East over the past few years. Among the strangest bedfellows are the Israelis and Saudis. It’s no secret that common cause in Syria of late has led the historic bitter enemies down a pragmatic path of unspoken cooperation as both seem to have placed the break up of the so-called “Shia crescent” as their primary policy goal in the region. But that’s perhaps why few pundits seemed overly shocked when Israeli media late last week began reporting that a Saudi prince made a secret visit to Israel, in spite of the fact that the kingdom does not recognize the Jewish state, and the two sides do not have diplomatic relations.

Last Wednesday (9/6) Israel’s state funded Kol Yisrael radio service made cryptic reference to the “secret” yet historic visit while withholding names and specifics. “An emir of the Saudi royal court visited the country secretly in recent days and discussed with senior Israeli officials the idea of advancing regional peace,” the station reported. It added further that, “Both the Prime Minister’s Office and the Foreign Ministry refused to comment on the issue.” 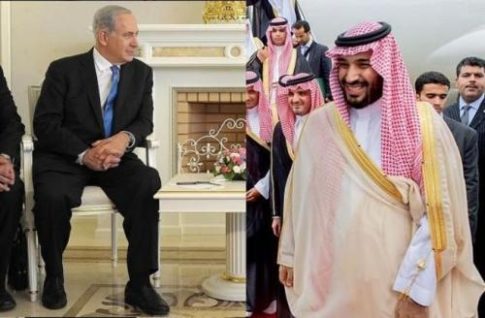 The visit is said to have occurred the same week Israeli Prime Minister Benjamin Netanyahu confirmed “unprecedented” relations with the Arab world. Netanyahu made the comments before members of the foreign ministry and said, “Things that are happening today between Israel and the Arab world are unprecedented. Cooperation on a wide range of issues are occurring behind the scenes, more than at any time in Israel’s history.”

But on Sunday reports began to emerge that the unidentified Saudi royal in question is no less than Crown Prince Mohammad bin Salman, which would indeed be shocking news: 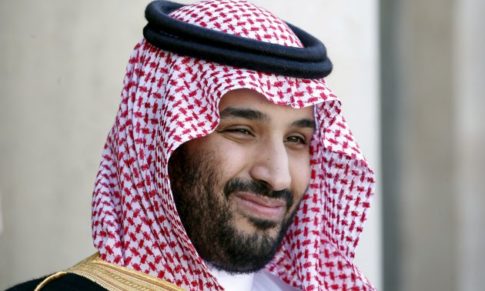 The secret is out: the ascension of Mohammad bin Salman, displacing CIA favorite Mohammad bin Nayef as Crown Prince, was in fact a white coup

What has been an open secret across the Arab world is not a secret anymore even in the US: What happened last month in the deep recesses of the House of Saud with the ascension of Crown Prince Mohammad bin Salman, aka MBS, was in fact a white coup.

Read morePepe Escobar: A coup in the House of Saud? – The secret is out: the ascension of Mohammad bin Salman, displacing CIA favorite Mohammad bin Nayef as Crown Prince, was in fact a white coup