ZAGREB, Croatia (AP) — The Croatian president thanks Argentina for taking in notorious pro-Nazi war criminals after World War II. In Bulgaria, a top politician calls the country’s Roma minority “ferocious humanoids.” And Hungary’s prime minister declares the “color” of Europeans should not mix with that of Africans or Arabs.

Ever since WWII, such views were taboo in Europe, confined to the far-right fringes. Today they are openly expressed by mainstream political leaders in parts of Central and Eastern Europe, part of a populist surge in the face of globalization and mass migration.

“Wind of change.
Defiance of impractical leftist dogma will be ridiculed as fascist patriotism, and that labelling will ignite civil unrest by ordinary civilians wanting a national identity to be proud of, not a politically watered down eunuch.” 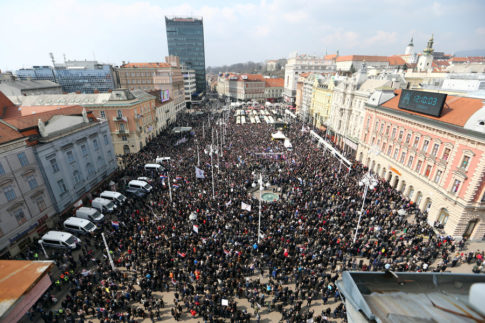 Thousands of conservative Croatian protesters have taken to the streets of Zagreb to speak out against a treaty designed to combat violence against women. Activists are unhappy that the legislation provides for transgender people.

Protesters sang songs as they marched through the Croatian capital, chanting slogans critical of the Istanbul Convention, the European treaty adopted by Croatia’s conservative government earlier this week. The legislation defines gender as “social roles, behaviors, activities and characteristics that a particular society considers appropriate for women and men.”  Its opponents have said that the European treaty introduces “a third gender” and indirectly legalizes gay marriage.

Welcome to the EU Member State Where Satire is Banned by Facebook https://t.co/hytCGFEYEU

Refugees Demand to be Allowed Into Croatia https://t.co/ueIFUpe4sI

Slobodan Praljak, 72, a former wartime leader, tilted back his head and took a swing from a flask or glass as the judge read out the verdict. The man’s defense lawyer then told the court that the accused had “taken poison.” The presiding judge stopped the proceedings and ordered a doctor to be called, Reuters reports.

“I just drank poison,” he said. “I am not a war criminal. I oppose this conviction.”

Praljak sat back down and slumped in his chair, a lawyer who was in the courtroom at the time said. The presiding judge suspended the hearing and called for a doctor. An ambulance was at the building and paramedics went to the courtroom.

“Could the Hague Courts be under instruction to create sparks?

The campaign to punish Serbs & Croats for wanting their own countries for themselves, and to make them pay for their loyalty to Mother Russia, is causing upset, which ties in with the prophesies.”

THE HAGUE, Netherlands (AP) — The Latest on rulings at the U.N. war crimes tribunal for the former Yugoslavia (all times local): 7:10 p.m. Prosecutors at a United Nations war crimes tribunal are welcoming an appeals panel’s judgment upholding the convictions of six Bosnian Croat military and political leaders.

A written statement from the tribunal’s prosecution said the convictions underscore Zagreb’s control over rebel Croat forces responsible for crimes in Bosnia during the Balkan wars of the 1990s. The former leaders were back before the U.N. International Criminal Tribunal for the former Yugoslavia on Wednesday to hear the outcome of their appeals. They were all found guilty of war crimes for trying to establish a Croat mini-state in Bosnia.