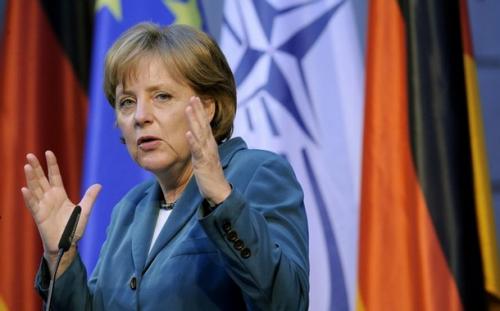 Under pressure: German troops are calling on Chancellor Angela Merkel to tell them why they’re at war in Afghanistan

German soldiers are wearing their hearts on their sleeves – in the form of a badge that protests their country’s involvement in the war in Afghanistan.

Some troops have taken to wearing the cloth accessory that states – ironically – ‘I fight for Merkel’ in a bid to persuade the German Chancellor Angela Merkel to explain exactly what they are fighting and dying for.

Seven soldiers have died there so far this month, bringing the total to 43 in all since they were first deployed eight years ago.

Unable to engage the Taliban directly on the ground, frustrated by their government’s inability to acknowledge they are even engaged in a war and angered by the lack of popular support for their mission, the badges are a low-key mutiny that has sent shock waves through the top brass of the Bundeswehr.

Soldiers were warned this week that it is illegal to sew the cloth patches on to their uniforms.

But that hasn’t stopped them from buying the badges in their hundreds, in desert beige or NATO green, at the ISAF camp at Mazar-e-Sharif.

Related information:
– What Depleted Uranium Does to Children in Iraq: Japanese Journalist
– Depleted Uranium Shells Worse Than Nuclear Weapons:
Inhaled or ingested DU particles are highly toxic, and DU has been classified as an illegal weapon of mass destruction by the United Nations.
“More than ten times the amount of radiation released during atmospheric testing [of nuclear bombs] has been released from DU weaponry since 1991,” said Leuren Moret, a U.S. nuclear scientist. “The genetic future of the Iraqi people, for the most part, is destroyed. The environment now is completely radioactive.”
“Because DU has a half-life of 4.5 billion years, the Middle East will, for all practical purposes, be radioactive forever.”
– The Weapon of Mass Destruction Is Cancer
– War-related birth defects in Fallujah
– IRAQ: ‘Special Weapons’ Have a Fallout on Babies
– Over 70,000 deaths, and over 1 million disabilities among American soldiers attributed to Iraq Wars says U.S. government data
– Beyond Treason (Documentary):
Beyond Treason investigates causes of Gulf War Illness and continuing deaths of gulf war veterans. Beyond Treason outlines: – exposure to depleted uranium munitions used on the battlefield. – chemical and biological exposures. – experimental vaccines given.

A classified German Army manual has thrown doubt over US and UK assurances that no depleted uranium munitions have been used in Afghanistan. 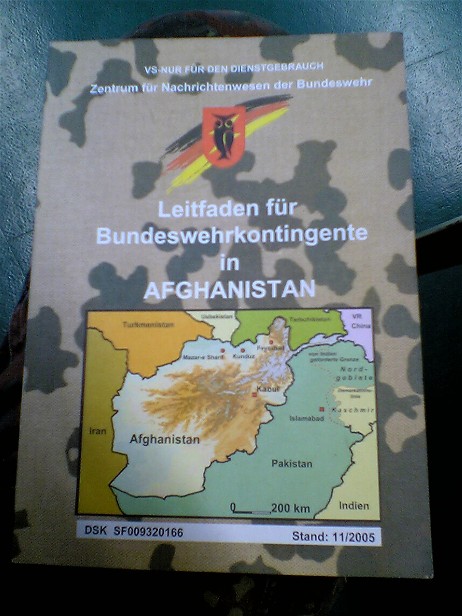 A military manual that was handed over to German campaigners has reignited allegations that the US used DU ammunition in Afghanistan. If true, it runs counter to repeated assurances given by the US military that no DU was used. The manual, a war-fighting guide for Bundeswehrcontigents in Afghanistan is marked classified and for official NATO use only. It was written by the Bundeswehr’s Centre for Communication and published in late 2005.

Campaigners have long suspected that the US military has not been entirely candid over the issue and papers have emerged showing that DU munitions were transported to Afghanistan. The use of A10 Warthog aircraft – one of the main users of DU ammunition – remains widespread to this day, although the number of armoured targets is now much diminished. Estimates by Janes Defence in 2003 suggested that the Taliban had at least 100 main battle tanks and 250 armoured fighting vehicles at the beginning of the conflict. It would be unusual if the US Army had chosen not to engage these targets with DU munitions from the air.

The section on DU munitions begins with: 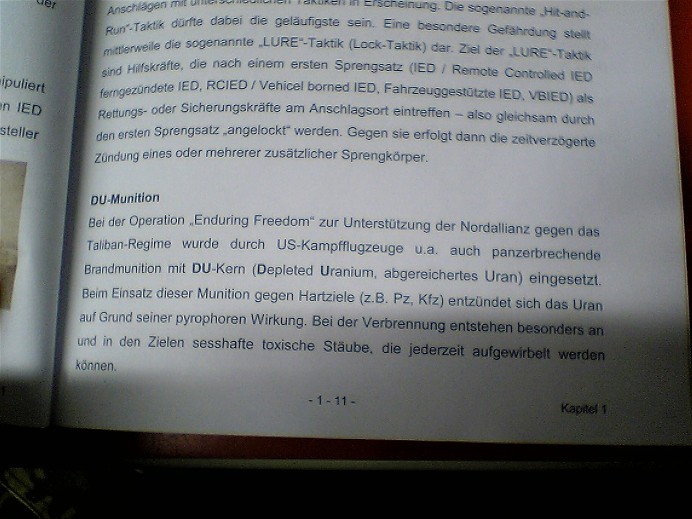 “During the operation “Enduring Freedom” in support of the Northern Alliance against the Taliban-Regime, US-aircraft used, amongst others, armour-piercing incendiary munitions with a DU-core (Depleted Uranium). Because of its pyrophoric character, when this type of munition is used against hard targets (e.g. tanks, cars) the uranium burns. During the combustion, toxic dusts can be deposited, particularly at and around the targets, which can then be re-suspended easily.”

It then warns troops how to recognise contaminated targets and of the potential health threat from DU munitions, suggesting precautions that troops should take. It is notable that they suggest the use of full Nuclear Chemical and Biological warfare suits: 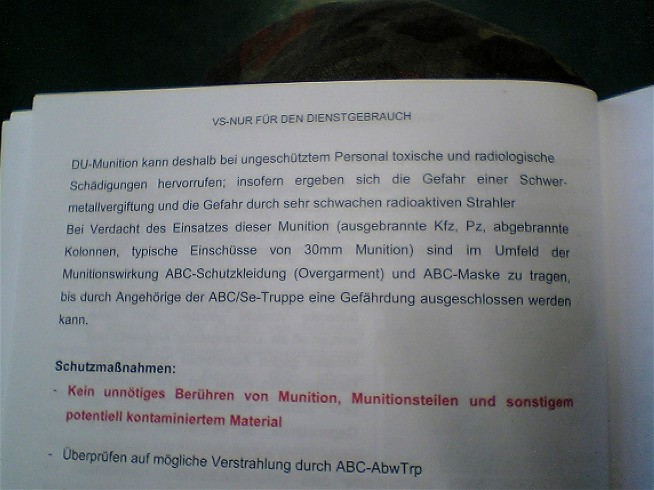 “DU-munitions can therefore induce toxic and radiological damage to exposed personnel through heavy metal poisoning and very low-level radiation. When it is suspected that these weapons have been used (burnt out cars or tanks, burnt out convoys, typical 30mm bullet holes) NBC (nuclear, biological and chemical) protection suits and NBC masks have to be worn in the vicinity of the munitions’ impact, until NBC security troops can rule out any threat.” 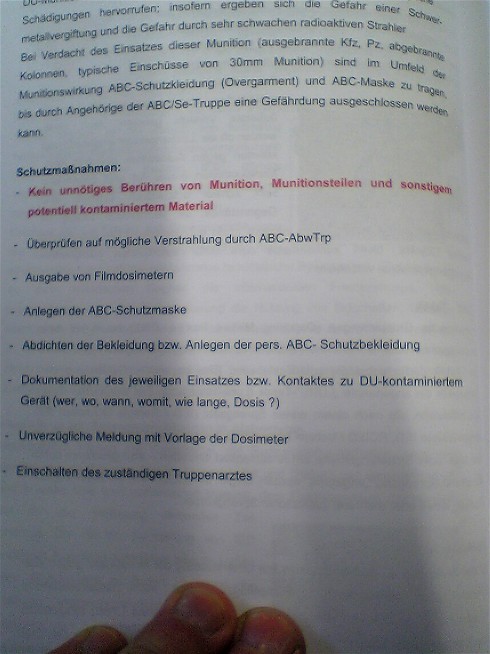 – No unnecessary contact with munitions, munitionparts, or any other potentially contaminated material
– Examination through NBC troop for possible radiation
– Issuing of film dosemeters
– Putting on NBC-masks
– Sealing up of clothing or wearing personal NBC protection suit
– Documenting any contact with DU-contaminated material (who, where, when, what, how long, and dose)
– Immediate report with submission of the dosemeter
– Calling in of the responsible troop doctor