Bilderberg David Cameron is only doing what he is told to do.

“We are grateful to the Washington Post, The New York Times, Time Magazine and other great publications whose directors have attended our meetings and respected their promises of discretion for almost forty years.
It would have been impossible for us to develop our plan for the world if we had been subjected to the lights of publicity during those years. But, the world is now more sophisticated and prepared to march towards a world government. The supranational sovereignty of an intellectual elite and world bankers is surely preferable to the national auto-determination practiced in past centuries.“
– David Rockefeller, Bilderberg meeting 1991 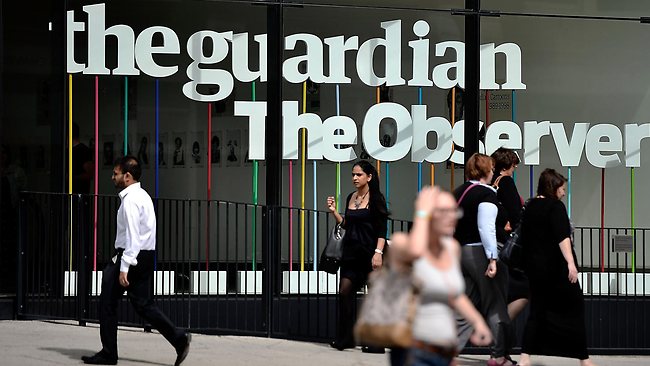 A general view of the Guardian Newspaper offices in London, England.

– UK Prime Minister Urges Investigation Of The Guardian Over Snowden Leaks; There Shall Be No Free Press (Techdirt, Oct 17, 2013):

While freedom of the press is fairly deeply engrained in the US, that’s not so true elsewhere — and that became abundantly clear with the absurd theatrics of UK officials forcing the Guardian to destroy a computer in the basement for no reason at all. And now UK Prime Minister David Cameron is ratcheting things up, urging Parliament to investigate The Guardian to see if it broke any laws:

David Cameron has encouraged a Commons select committee to investigate whether the Guardian has broken the law or damaged national security by publishing secrets leaked by the National Security Agency whistleblower Edward Snowden.

He made his proposal in response to a question from former defence secretary Liam Fox, saying the Guardian had been guilty of double standards for exposing the scandal of phone hacking by newspapers and yet had gone on to publish secrets from the NSA taken by Snowden.

I’ve read that statement over and over and over again, and I still don’t see what the double standard is. Both involve reporting on things of public interest, which, last I checked, is exactly what news organizations are supposed to do.

Read moreUK PM David Cameron Urges Investigation Of The Guardian Over Snowden Leaks; There Shall Be No Free Press 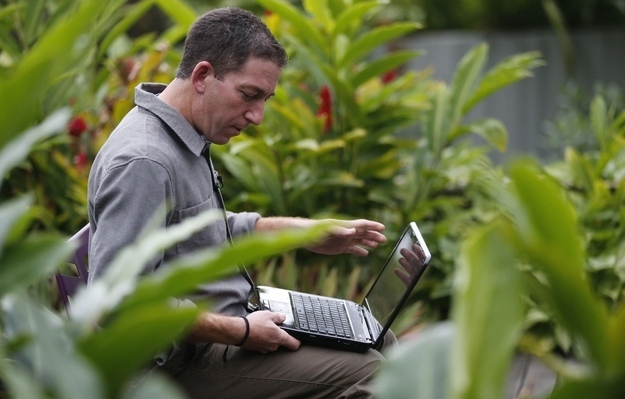 Glenn Greenwald, the lawyer and blogger who brought The Guardian the biggest scoop of the decade, is departing the London-based news organization, for a brand-new, large-scale, broadly focused media outlet, he told BuzzFeed Tuesday.

Greenwald, 46, published revelations from former National Security Agency contractor Edward Snowden about the extent of American and British domestic spying and about officials’ deception about its scope. He said he is departing for a new, “once-in-a-career dream journalistic opportunity” with major financial backing, the details of which will be public soon.

UK authorities reportedly raided the Guardian’s office in London to destroy hard drives in an effort to stop future publications of leaks from former NSA contractor Edward Snowden. The action is unlikely to prevent new materials coming out.

Guardian editor Alan Rusbridger revealed in a Monday article posted on the British newspaper’s website that intelligence officials from the Government Communications Headquarters (GCHQ) told him that he would either have to hand over all the classified documents or have the newspaper’s hard drives destroyed.

Rusbridger wrote that the government officials then watched as computers, which contained classified information passed on by Snowden, were physically destroyed in one of the newspaper building’s basements.

“We can call off the black helicopters,” Rusbridger said one of the officials joked.

Another source familiar with the event confirmed to Reuters that Guardian employees destroyed the computers as UK officials observed.

During negotiations with the government, Rusbridger said that the newspaper could not fulfill its journalistic duty if it satisfied the authorities’ requests.

But GCHQ reportedly responded by telling the Guardian that it had already sparked the debate, which was enough.

“You’ve had your debate. There’s no need to write any more,” Reuters quoted the unnamed official as saying.

– XKeyscore: NSA tool collects ‘nearly everything a user does on the internet’ (Guardian, July 31, 2013):

A top secret National Security Agency program allows analysts to search with no prior authorization through vast databases containing emails, online chats and the browsing histories of millions of individuals, according to documents provided by whistleblower Edward Snowden.

The NSA boasts in training materials that the program, called XKeyscore, is its “widest-reaching” system for developing intelligence from the internet.

The latest revelations will add to the intense public and congressional debate around the extent of NSA surveillance programs. They come as senior intelligence officials testify to the Senate judiciary committee on Wednesday, releasing classified documents in response to the Guardian’s earlier stories on bulk collection of phone records and Fisa surveillance court oversight.

The files shed light on one of Snowden’s most controversial statements, made in his first video interview published by the Guardian on June 10.

“I, sitting at my desk,” said Snowden, could “wiretap anyone, from you or your accountant, to a federal judge or even the president, if I had a personal email”.

US officials vehemently denied this specific claim. Mike Rogers, the Republican chairman of the House intelligence committee, said of Snowden’s assertion: “He’s lying. It’s impossible for him to do what he was saying he could do.”

But training materials for XKeyscore detail how analysts can use it and other systems to mine enormous agency databases by filling in a simple on-screen form giving only a broad justification for the search. The request is not reviewed by a court or any NSA personnel before it is processed.

Read moreXKeyscore: NSA Tool Collects ‘Nearly Everything A User Does On The Internet’

As Congress holds its second major public hearing on the National Security Agency’s bulk spying, we speak with Glenn Greenwald, the Guardian journalist who first published whistleblower Edward Snowden’s revelations. The NSA admitted their analysis of phone records and online behavior far exceeded what it had previously disclosed. “The fact that you now see members of both political parties increasingly angry over the fact that they were misled and lied to by top-level Obama administration officials, that the laws that they enacted in the wake of 9/11 — as broad as they were — are being incredibly distorted by secret legal interpretations approved by secret courts, really indicates exactly that Snowden’s motives to come forward with these revelations, at the expense of his liberty and even his life, were valid and compelling,” Greenwald says. “If you think about whistleblowing in terms of people who expose things the government is hiding that they shouldn’t be, in order to bring about reform, I think what you’re seeing is the fruits of classic whistleblowing.”

We’ve talked about procedures within the Defense Department to block computers from accessing the website for The Guardian newspaper — along with similarly short-sighted moves to apply a sledgehammer approach to pretending that public information isn’t really public. I’ve heard from a few people within the Defense Department who defend this approach on basic procedural grounds of trying to “make sure” that classified info remains classified, but the real problem is considering any publicly revealed documents as still classified. As I’ve said each time this debate comes up, in the business world, the equivalent situation involving trade secrets or non-disclosure agreements almost always are recognized as null and void if the info becomes public through other means.

However, that’s not the way the government works. The latest is that Homeland Security sent around a memo warning employees that merely opening up a Washington Post article about some of the leaks might violate their non-disclosure agreement to “protect National Security Information,” and it even says that merely clicking on the story might make the reader “subject to any administrative or legal action from the Government.” Got that? Working for the government and merely reading the news about things the government is doing might subject you to legal action.

At least someone in Congress realizes the insanity of all of this. Rep. Alan Grayson, who displayed the very same NSA slides that DHS is warning its employees about in Congress itself, has offered up an amendment to the Defense Appropriations Bill, stating that nothing in the defense appropriations should be used to block employees from reading the news on their own time.

None of the funds made available by this Act may be used to restrict the access of members of the Armed Forces to publically available online news media during morale, welfare, and recreation periods.