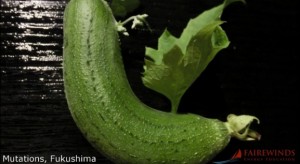 Fairewinds Energy Education, Apr. 10, 2014 — Chiho Kaneko, member of the Board of Directors of Fairewinds originally from Iwate, Japan (at 11:15 in): It’s not just people who are sicker. I met a home gardener who lives in Kawamata, Fukushima, 30-miles from Fukushima Daiichi. She grows luffas, whose fruit is often dried to make bath sponges. Last year, with some trepidation, she used the seeds saved from the year before. She found flower buds directly growing out of the fruit. Some of her pole beans were abnormally gigantic. Near Fukushima city, another person saw a frog so severely deformed that, at first, it was difficult to tell that it was a frog, save for its hopping. These are true events described by people I met who took notes and photographs of these environmental anomalies.

Asian Perspective Vol. 37, No. 4, Anders Pape Møller and Timothy A. Mousseau, Oct.-Dec. 2013: A careful observer [who visits Chernobyl or Fukushima] will quickly become aware of the peculiar distortions of tree growth, numerous abnormalities in insects, and tumors and cataracts in birds, all caused by genetic mutations induced by exposure to the radiation […] radiation causes damage to DNA molecules (leading to mutations if not repaired) […] We have known for more than eighty years that low-dose radiation has cytotoxic effects and causes mutations. […] we looked at 373 effect sizes from forty-six different studies […] they showed a statistically significant negative effect of radiation […] on mutation, physiology, immunology, and disease. As one would expect, effects were stronger on plants, which are stuck in one place, than on animals that can move around […] As the first scientists in both Chernobyl and Fukushima, we have performed [fifteen] published tests, of organisms ranging from plants and insects to birds and mammals in Chernobyl, that support the hypothesis that low-dose radiation disrupts development, and all fifteen studies show a higher degree of asymmetry in the more contaminated plots. […] we have assembled effect sizes from all published studies of mutation rates from Chernobyl, in total 151 estimates of mutations in forty-five studies of thirty-three species ranging from bacteria and plants to insects, birds, and mammals, including humans [The] findings are robust in showing a general, strong overall mean effect size of radiation on mutation rates. […] Mutations accumulate with time and across generations, so we may only be seeing the first stages of the negative public health consequences […] for humans. 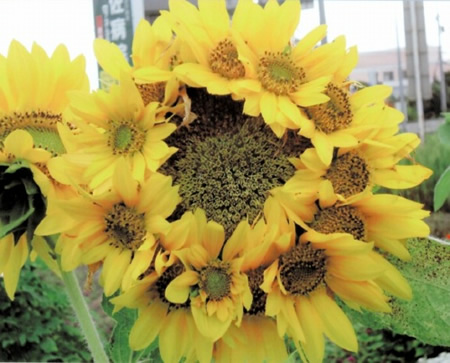 Having the harvesting season, more and more mutated plants are found. 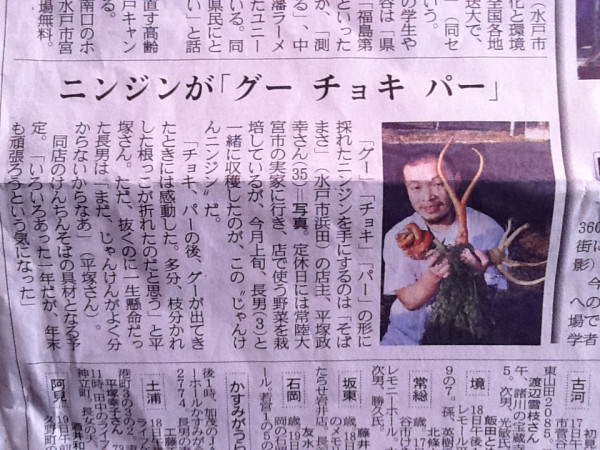 The man who runs his Soba shop grew these “carrots”.

He is “happy” to find them. He thinks it looks like paper, scissors, rock.

He has no question to serve them at his shop. 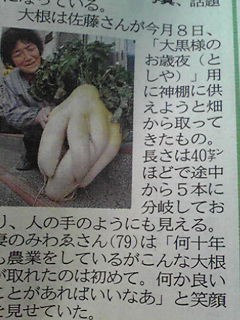 She says she has been growing plants for decades but she has never seen a Japanese radish like this.