While campaigning ahead of elections, Spanish prime minister Mariano Rajoy was rocked with a right cross when a “selfie-seeking teen” approached and went full Balboa on the side of his face, breaking his glasses, before Rajoy’s security detail wrestled the assailant to the floor. As El-Pais reports, the 17-year-old told police “I’m very happy I did it,” while Rajoy later tweeted that he “was fine.”

A 17-year-old has been arrested in Pontevedra after giving a strong punch in the face to the Prime Minister, Mariano Rajoy, who has been left bruised and broken his glasses. The assailant, identified as Andrew VF, had quietly approached the presidential candidate for the PP government, supposedly to take a photo, selfie , with the PM, who was making one of the electoral walks with that is lavishing during this election campaign. Suddenly, the young man gave him a blow in the face to the president, who has caught totally unprepared.

A witness to the incident explained that the assailant was placed, along with others, by the President minutes before delivering the blow. “It was a while standing next to him. He was placed in front of Rajoy to take a picture. Suddenly has snorted, and with the left hand, has given a very strong punch in the face,” said the witness, he was accompanying the delegation during the ride.

The assailant has been identified as Andres de V., a resident of Pontevedra, who when arrested by the police said: “I am very happy to have done it,” police said.

Amid the turmoil in Portugal, the Barcenas-Affair in Spain had dropped to the back-pages of the European press… until now. The illegal party-funding that ex-Treasurer Barcenas is now whistle-blowing on has been linked directly to Spanish prime-minister – despite Rajoy’s ongoing denial of everything – via text messages uncovered by Spain’s El Mundo newspaper. The opposition leadership is demanding Rajoy’s “immediate resignation,” noting he “is incapacitated,” amid the damage that the texts – which prove an ongoing and direct link to the man at the hub of the funding debacle for at least the last two years (when Rajoy has expressly denied any relationship). “You cannot govern well,” another congressman noted, when there is “very clear data” linking Barcenas with the PP (Rajoy’s party) and the alleged illegal funding. Only a few screen shots have been released of the dozens of texts that the paper has apparently received…

Via El Mundo (and Google Translate),

Mariano Rajoy maintained a direct and permanent contact (at least May 2011 to March 2013) with the former treasurer and asked him to deny the B accounts and bonuses . This is demonstrated by SMS were exchanged and numerous conversations, telephone or face to face.

– The Chart Spain’s Mariano Rajoy Wishes Could Be Swept Under The Rug (ZeroHedge, Sep 16, 2012)

Europe’s chicken or egg problem is about to strike with a vengeance. As a reminder, the biggest paradox of the recently conceived “make it up as you go along” bailout of Europe is that “in order to be saved, Spain (and Italy) must first be destroyed“. Sure enough, the markets have long since priced in the “saved” part with the Spanish 10 year sliding to multi-month lows, but in the process everyone forgot about the destruction. Because as has been made quite clear, secondary market bond buying will not be activated without a formal bailout request by a country, in essence admitting its insolvency, and handing over domestic fiscal and sovereign control to the IMF and other international entities. As a further reminder, many, Goldman Sachs especially, had hoped that Spain would request a bailout as soon as Friday. To wit: “With a large (and uncovered) redemption looming at the end of October (and under pressure from other Euro area governments), we expect Spain to move towards seeking support.” Alas, as we expected, this is now not going to happen, and the pricing in of the entire “saved” part will have to be unwound as Spain is forced to accept being “destroyed” first. To wit: “I don’t know if Spain needs to ask for it,” Rajoy told parliament in a debate session, referring to an international rescue for Spain.”And ironically the further the market prices in salvation, the more unrealistic a bailout request becomes. In the meantime Spain is running out of cash, and what has been a buying euphoria may well becoming a selling revulsion as the market realizes that without the ECB’s explicit bond buying support, there is no reason to buy the bonds of a country with 25% unemployment, a massive budget deficit, an imploding housing market, and insolvent banking system. But who cares about details in a centrally-planned world.

Spain continues to study the price it will have to pay for seeking help from the European Central Bank’s bond-buying programme but improved market conditions may make aid unecessary, Prime Minister Mariano Rajoy said on Wednesday.

“I don’t know if Spain needs to ask for it,” Rajoy told parliament in a debate session, referring to an international rescue for Spain.

Some hours ago Spain finally bit the bullet, and after months of waffling had no choice but to hand over €4.5 billion (the first of many such cash rescues) in the form of a bridge loan to insolvent Bankia, which last week reported staggering losses (translation: huge deposit outflows which have made the fudging of its balance sheet impossible). As a reminder, in June Spain formally announced it would request up to €100 billion in bailout cash for its insolvent banking system, which subsequently was determined would come from the bank rescue fund, the Frob, which in turn would be funded with ESM debt which subordinates regular Spanish bonds, promises to the contrary by all politicians (whose job is to lie when it becomes serious) notwithstanding. And while Rajoy has promised that the whole €100 billion will not be used, the truth is that considering the soaring level of nonperforming loans in Spain – the biggest drain of both bank capital and liquidity – it is guaranteed that the final funding need for Spain’s banks will be far greater. As a further reminder, Deutsche Bank calculated that when (not if) the recap amount hits €120 billion, Spanish total debt/GDP would soar to 97% in 2014 from an official number of 68.5% in 2011 (luckily the endspiel will come far sooner than that). But all of that is well-known, and what we wanted to focus on instead was the fact that bank bailout notwithstanding, Spain will have no choice but to demand a full blown rescue within a few short months for one simple reason: its cash will run out.

Read moreSpain Is Running Out Of Cash

The last time a sovereign bond issue was imploding at this rate without the ECB’s intervention, Silvio Berlusconi was about to be forcibly retired. This time, however, we fail to see what the assorted globalist elements will benefit by having Rajoy displaced: after all he has been a studious and versatile pawn of the status quo, who squawks repeatedly and whenever needed that Spain is solvent and that its banks are not in need of a bailout. That said, stick a fork in Spain, and all those newsletter writers who were saying to buy its bonds, or equities: at last check the IBEX was down nearly 5%, after falling by the same amount on Friday. This is the equivalent of the Dow Jones tumbling by just about 600 points. The catalyst – the 10 Year which touched on 7.565% minutes earlier, as virtually all hope is now lost – it is now every country and region for himself, and he who panics first, panics best. 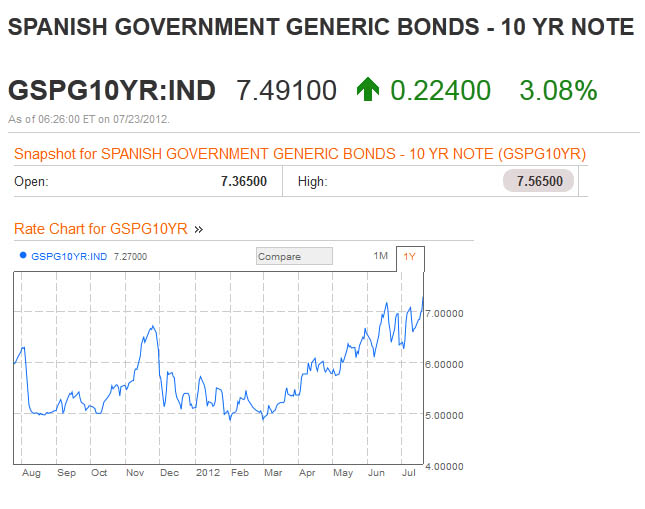 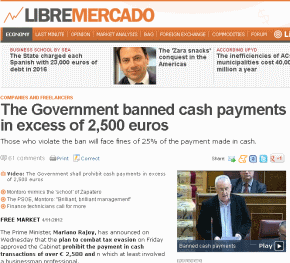 The Spanish rebellion has begun, sooner and more dramatically than I expected.

As many readers will already have seen, Premier Mariano Rajoy has refused point blank to comply with the austerity demands of the European Commission and the European Council (hijacked by Merkozy).

Taking what he called a “sovereign decision”, he simply announced that he intends to ignore the EU deficit target of 4.4pc of GDP for this year, setting his own target of 5.8pc instead (down from 8.5pc in 2011).

In the twenty years or so that I have been following EU affairs closely, I cannot remember such a bold and open act of defiance by any state. Usually such matters are fudged. Countries stretch the line, but do not actually cross it.