Some hours ago Spain finally bit the bullet, and after months of waffling had no choice but to hand over €4.5 billion (the first of many such cash rescues) in the form of a bridge loan to insolvent Bankia, which last week reported staggering losses (translation: huge deposit outflows which have made the fudging of its balance sheet impossible). As a reminder, in June Spain formally announced it would request up to €100 billion in bailout cash for its insolvent banking system, which subsequently was determined would come from the bank rescue fund, the Frob, which in turn would be funded with ESM debt which subordinates regular Spanish bonds, promises to the contrary by all politicians (whose job is to lie when it becomes serious) notwithstanding. And while Rajoy has promised that the whole €100 billion will not be used, the truth is that considering the soaring level of nonperforming loans in Spain – the biggest drain of both bank capital and liquidity – it is guaranteed that the final funding need for Spain’s banks will be far greater. As a further reminder, Deutsche Bank calculated that when (not if) the recap amount hits €120 billion, Spanish total debt/GDP would soar to 97% in 2014 from an official number of 68.5% in 2011 (luckily the endspiel will come far sooner than that). But all of that is well-known, and what we wanted to focus on instead was the fact that bank bailout notwithstanding, Spain will have no choice but to demand a full blown rescue within a few short months for one simple reason: its cash will run out.Before we dig deeper, a quick reminder: while everyone focuses on the cash generation by the Spanish sovereign, via the almost daily Bill and Bond auctions, what many forget is that the bulk of the proceeds is merely used to refinance existing debt. The remainder goes to fund the actual national deficit (of which there is plenty to go round), and to be deployed via various less than legitimate channels to keep insolvent financial institutions “solvent” until such time as these can become someone else’s problem. Namely Germany’s. Until that happens however, Spain is facing crunchtime as it has to fund over €40 billion in debt maturities in the next two months alone. 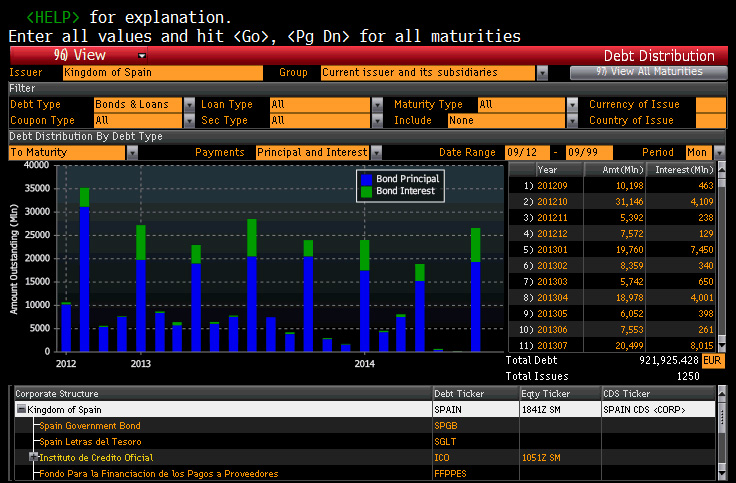 A secondary problem is that not only is Spain still facing a gaping primary deficit, it also has to pay the interest on its rolling refis  which as everyone knows, and Rajoy most certainly, are unsustainable in the 6%+ range, not so much standalone, but certainly when juxtaposed with an economy which is collapsing in nominal terms, and is “growing” at a -0.4% growth rate. In other words, compounding the refi issue, is the fact that ever more of the organic growth from the economy has to be paid out to various state creditors.

Add the fact that the economy itself continues to collapse, with unemployment deteriorating with no bottom in sight, only completes the triangle of terror.

Which brings us to Exhibit A: the chart below shows Spain’s National Account monthly cash balance, broken into its two subcomponents: the deposits at the Banco de Espana, and the Treasury Liquidity Tenders (columns 11 and 12; full historical breakdown here). The reason we bring it up is that this is the chart that everyone loves to forget. 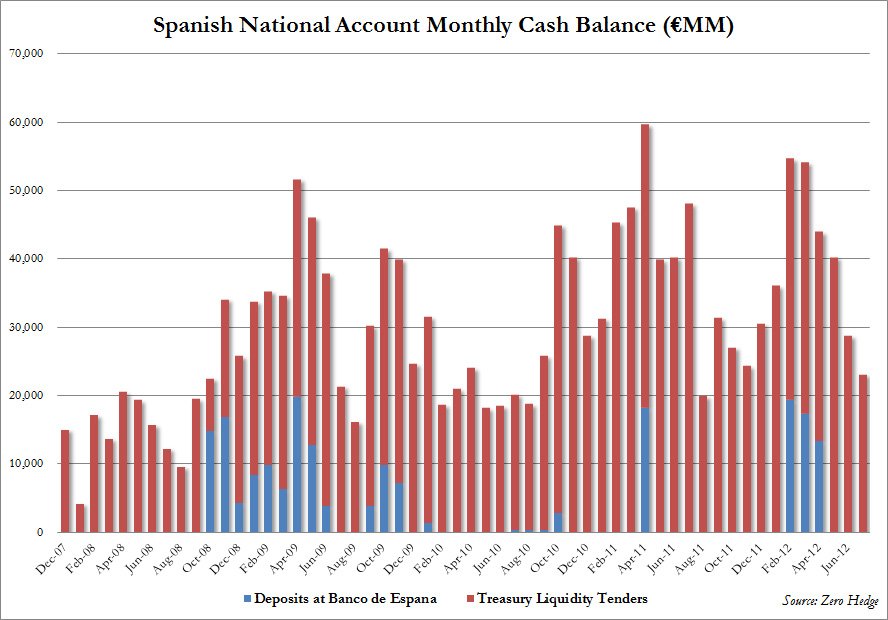 The chart shows is that in July the Spanish cash balance dropped to €23 billion after hitting a 2012 high of €54 in March. It has plunged straight line since then, unable to repeat last year’s July cash surge (when the number was more than double), and if the recent deposit outflow is any indication, the government will have had to plug many bank holes using fungible cash using any means necessary and possible. In other words, once the next Spanish State Liability update is posted, we wouldn’t be surprised to see this number plunge to a new post-Lehman low. Yet what is scariest is that all else equal (and it never is), at the current run rate Spain may well run out of cash by the end of the year even assuming it manages to conclude all its remaining auctions through year’s end without a glitch.

What all this really means it that any debate over whether Spain needs a bailout is at this point moot. It also means that absent a direct cash injection into the Spanish sovereign, Rajoy will have no choice, but to demand a bailout. What he does subsequently – whether he stays or he goes – will determine if the Spanish transition from a sovereign state to the latest vassal entity of the Troika and, more importantly, Germany will be peaceful (as much as possible) or rather violent.