– Bomb Attack Hits Secretive US Base In Afghanistan As Mattis Makes Surprise Visit To Kabul:

Taliban insurgents attacked a U.S.-operated base in Afghanistan’s eastern province of Khost on Monday officials said, but gave few immediate details of an assault that coincided with a surprise visit to Kabul by U.S. Secretary of Defense James Mattis. The attackers detonated a car bomb at an entrance to Camp Chapman, a secretive facility manned by U.S. forces and private military contractors.

KABUL — A blizzard of bank notes is flying out of Afghanistan — often in full view of customs officers at the Kabul airport — as part of a cash exodus that is confounding U.S. officials and raising concerns about the money’s origin.

The cash, estimated to total well over $1 billion a year, flows mostly to the Persian Gulf emirate of Dubai, where many wealthy Afghans now park their families and funds, according to U.S. and Afghan officials. So long as departing cash is declared at the airport here, its transfer is legal.

But at a time when the United States and its allies are spending billions of dollars to prop up the fragile government of President Hamid Karzai, the volume of the outflow has stirred concerns that funds have been diverted from aid. The U.S. Drug Enforcement Administration, for its part, is trying to figure out whether some of the money comes from Afghanistan’s thriving opium trade. And officials in neighboring Pakistan think that at least some of the cash leaving Kabul has been smuggled overland from Pakistan.

“All this money magically appears from nowhere,” said a U.S. official who monitors Afghanistan’s growing role as a hub for cash transfers to Dubai, which has six flights a day to and from Kabul.

Meanwhile, the United States is stepping up efforts to stop money flow in the other direction — into Afghanistan and Pakistan in support of al-Qaeda and the Taliban. Senior Treasury Department officials visited Kabul this month to discuss the cash flows and other issues relating to this country’s infant, often chaotic financial sector.

Read moreUS officials puzzle over millions of dollars in cash, well over $1 billion a year, leaving Afghanistan by plane for Dubai

More than 500 AK47 rifles had been removed from the bunker by Blackwater staff without permission.

Private American security guards working for the US military in Afghanistan removed hundreds of handguns and automatic weapons from stores intended for the exclusive use of the Afghan police and used them on drunken shooting rampages that killed two Afghan civilians and injured at least two more.

The guards included a former US Marine with a criminal record of assault and battery and a former soldier discharged from the US Army after testing positive for cocaine, Congress heard yesterday.

Justin Cannon, Christopher Drotleff and a guard using the name “Eric Cartman” from the cartoon South Park were employees of a subsidiary of the Blackwater Worldwide group, implicated in a litany of extrajudicial shootings since 2003 in Afghanistan and Iraq.

Cannon and Drotleff have been charged with killing two Afghans and injuring a third in an incident last May when they opened fire on a car carrying four civilians in Kabul, while under the influence of alcohol. The men, who were hired to train Afghan soldiers, had no permission from US authorities to carry guns. 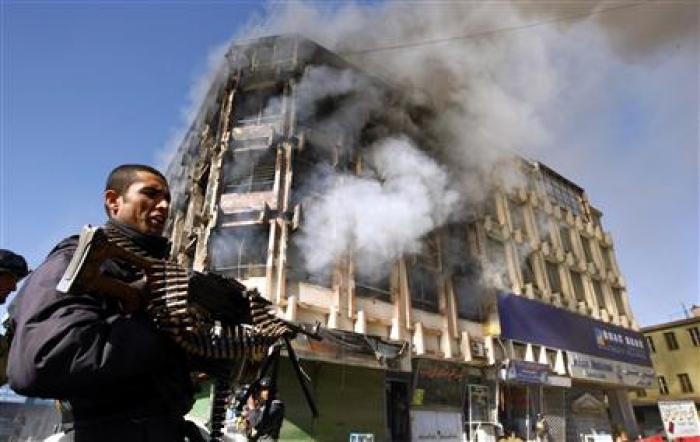 An Afghan policeman stands in front of the shopping mall, where Taliban gunmen battled security forces for hours, as the government forces restored control after the attack in Kabul January 18, 2010. (REUTERS)

(Financial Times) — Taliban militants on Monday launched one of their fiercest assaults on Kabul, the Afghan capital, since their government was ousted from power in 2001 after the September 11 terror attacks on the US.

At least five gunmen were killed after running gun battles in the streets of central Kabul and a series of suicide bomb attacks near banks and several government ministries. A four-hour exchange of fire culminated in a siege at a shopping complex where the gunmen had holed up as plumes of acrid smoke rose above the city.

Sponsored by the US taxpayer. 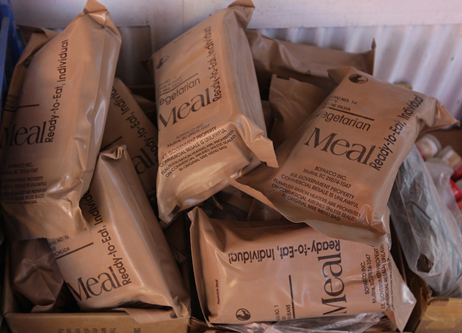 Now Afghans are beginning to call their notorious bazaar full of chow and supplies bought or stolen from the vast U.S. military bases by the name of the current American president, a modest counterweight to his Nobel Peace Prize.

“It is Obama Market now,” pronounced Haji Tor, a rotund shopkeeper who acts as kind of an unofficial chamber of commerce president for the market in the Afghan capital. “Bush is finished.”

Well, maybe not quite yet. Most of the shopkeepers and customers still call it the Bush Market, but several said that the new name is gradually gaining traction.