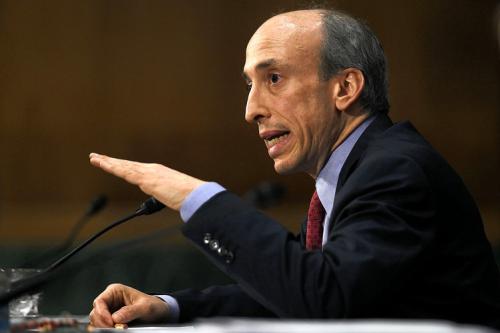 For years on end, many wondered how it is possible that Gary Gensler allowed Wall Street firms to manipulate, rig, and otherwise abuse the US commodity market which he, as head of the Commodity Futures Trading Commission from 2009 until 2014, was supposed to regulate.

Some, such as this website, suggested that what Gensler was doing was simply protecting his former colleagues from civil or criminal investigation and prosecution. After all Gensler is far better known for not only having worked at Goldman Sachs for 18 years most recently as co-head of finance, prior to joining the CFTC, but for becoming the youngest ever Goldman partner, at the tender age of 30.

Certainly, being the wealthiest member of the original Obama administration did not hurt: in 2009 the Wasingtonian reported his net assets as being between $15,533,000 and $61,745,000. We take the higher number. To be sure, he had been paid well at Goldman and now had a duty to his former employer: to keep Goldman (or any other Wall Street bank) off the hook of any regulatory investigation.

– Gerald Celente: ‘The Whole Nation Has Been Taken Over. It’s The Biggest Bank Robbery In World History And The Banks Are Doing The Robbing.’ (Video)

– On The Edge With Max Keiser And Gerald Celente: LIBOR Manipulation Is ‘The Crime Of The Century’ (Video)

Former Goldman appartchik Gary Gensler is about to take the stage (again) and explain why the CFTC should exist at all after allowing not only MF Global but a few weeks ago, Peregrine Financial, to steal hundreds of millions in client money without any regulatory supervision at all. All we can say here is: Free Corzine!

There is a reason why WWII legendary “pineapple” grenade bore the initials MK2. Those who enjoy the works of Mike Krieger and Max Keiser are in for a treat, with this 2 for the price of 1 (technically for the price of zero) interview of Krieger by Keiser, as the MKs of the world unite, and take on financial fraud.

From Mike Krieger of Libertyblitzkrieg:

In case you missed it, Josh Brown recently published a list via the Huffington Post of what he believes are the 25 most dangerous people in financial media.  He definitely got the first two slots correct.  At the very top are Max Keiser and Stacy Herbert, who unrelentingly publish their “Financial War Reports” daily here.  At the number two position, is Zerohedge, the best financial site on the web.  I have been fortunate enough to have collaborated with Max, Stacy and Zerohedge for the past two years and it has been an extremely rewarding experience.  To get to the point, below is my just released latest interview on the Keiser Report.  I think it’s the best one we’ve done in a while.  Enjoy!