– US Sends Another 1,000 Troops To Poland As Part Of NATO Effort To Counter Russia:

President Obama is in Warsaw, Poland today where NATO members are holding a summit to show the alliance will stand firm against new threats, including a “resurgent Russia.” The Warsaw meeting is being held in a district of the capital, Praga, that Poles view as a symbol of Russian betrayal of their nation.

In the meeting, Obama called on NATO to “stand firm” against Russia, terrorism and other challenges even as a key member, UK, retrenches from Europe. In an op-ed published in the Financial Times on Friday, Obama says the U.S. and European nation “must summon the political will, and make concrete commitments” to affirm European cooperation.

“This may be the most important moment for our transatlantic alliance since the end of the Cold War,” Obama wrote. “Russia’s aggression against Ukraine threatens our vision of a Europe that is whole, free and at peace.” The US president added that “NATO will once again send a very clear message that we are here.”

Stoltenberg said that Russia’s hostile actions in Ukraine have spurred the alliance to raise its defenses on the eastern flank. Stoltenberg spoke to reporters before the NATO summit opened in Warsaw on Friday to approve, among others, the presence of four battalions in Poland and the Baltic states. These nations feel threatened after Russia annexed Crimea from Ukraine in 2014 and continues to back separatists in eastern Ukraine. Stoltenbeg said: “No one was talking about reinforcing deterrence” before the aggressive action in Crimea. Still, Stoltenberg added that the alliance wants “a meaningful and constructive dialogue with Russia” to reduce risks, increase predictability and enhance transparency “in times like these.”

NATO’s massive build-up in the three Baltic countries and Poland is officially labeled “assurance measures,” but not everyone in the alliance is keen to take part in what the Foreign Minister of Europe’s most important NATO member, Frank-Walter Steinmeier, called three weeks ago “saber-rattling and warmongering.” 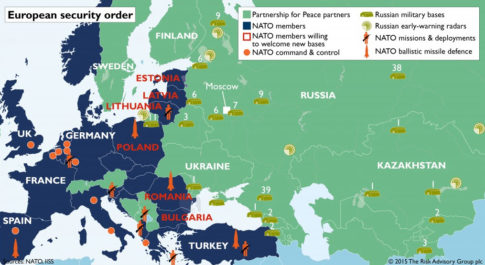 “Whoever believes that a symbolic tank parade on the alliance’s eastern border will bring security is mistaken,” Steinmeier said in defiance of multiple war games in the region. A recent YouGov poll found that 64 percent of Germans agreed with his statement, with only 16 percent rejecting it.

Other prominent Germans agreed: the country’s Vice-Chancellor Sigmar Gabriel, an influential yet moderate politician, said NATO must revise its policy. “We must ask if the world would be a better place when both sides conduct military exercises on the borders and arm themselves,” he told Passauer Neue Presse on Thursday, adding that it is time for Europe to start a new “disarmament initiative.”

It was not just Italy: Italy recently said it is wary of NATO’s hardline policy towards Russia. The alliance should “build bridges” in Eastern Europe and cooperate with Moscow to tackle global terrorism, Italian Defense Minister Roberta Pinotti told Corriere della Sera on Wednesday.  “We agree with what Steinmeier has said,” she added.

Still, Germany – where weapons nearly doubled last year – expressed a different angle, with its defense minister saying that NATO is right to deploy troops on its eastern frontiers to counter what she called a “completely unpredictable and aggressive Russia.” Ursula von der Leyen says the Baltic states want protection because Russia’s annexation of Crimea shows that Moscow “doesn’t respect borders.”

Disagreeing with Steinmeier, Leyen told German broadcaster ARD on Friday that NATO needs to maintain a dialogue with Russia from what she called a “position of strength.” Von der Leyen said “it’s important that NATO deploys with such strength that it’s clear nobody can see an advantage in attacking this military alliance.” She spoke as heads of NATO member states were meeting in Poland, where relations with Russia will be among the top issues.

Meanwhile, Moscow, which has always opposed NATO’s build-up in its neighborhood, said it is “closely watching” the Warsaw summit and keeping the door for dialogue open, especially to fight what it sees as a “genuine threat” – terrorism. “We hope common sense will prevail,” the Kremlin spokesman Dmitry Peskov told reporters on Friday.

“It is absurd to speak of a threat coming from Russia when dozens of people are being killed in the heart of Europe, while hundreds die in the Middle East every day,” he stressed. Peskov added that NATO’s “anti-Russian hysteria” and multiple troop deployments do not help find common ground for cooperation.

Peskov added that “Russia is not looking (for an enemy) but it actually sees it happening. When NATO soldiers march along our border and NATO jets fly by, it’s not us who is moving closer to the NATO borders.”

Russia’s stance notwithstanding, AP reports that leaders of NATO and the European Union nations signed a “historic deal” that boosts their cooperation in defense against new challenges. The deal was signed Friday in Warsaw, shortly before a NATO summit opened there to show the Western world’s unity in facing threats from the East and the South. It was signed by NATO Secretary-General Jens Stoltenberg, European Council President Donald Tusk and European Commission President Jean-Claude Juncker.

Stoltenberg said it was a “historic deal” that gave “new substance, new impetus” to the EU-NATO partnership in fighting hybrid warfare, cyberattacks and containing the massive wave of illegal migrants.
Tusk said the new deal would mend a situation in which it could seem sometimes that NATO, a military alliance, and EU, a political and economic bloc, are “on different planets,” not in the same city. Both have headquarters in Brussels, Belgium, though some nations belong to only one organization.

Hybrid warfare is the use of different tools such as propaganda and psychological campaigns, cyberattacks, and use of political, economic and energy pressure, among others.

But the most important development was Obama announcement that the U.S. is sending an additional 1,000 U.S. troops to Poland as part of a NATO effort to reinforce its presence on the alliance’s eastern flank.

The U.S.-led battalion is one of four that NATO will begin rotating through the region. The move is meant to act as a deterrent to Russia, AP adds.

Obama is touting the decision in remarks to reporters after a meeting with Polish President Andrzej Duda. The U.S. president thanked Poland for its contributions to the campaign against the Islamic State group, including its F-16 aircraft and special forces trainers. He called Poland “a lynchpin in the defense of NATO’s eastern flank.”

Naturally, Russia will promptly respond in kind and send even more troops to its borders with Europe, and the escalation will continue until finally an “accident” happens and the next phase of this unprecedented redux of the Cold War enters its next phase.