Having cornered the central banker market, with its alumni manning key positions at most central banks, Goldman has decided to tip its cards into its next zone of interest: geopolitics, and has done so by hiring none other than the former head of the European Commission, Jean-Claude Juncker’s predecessor and one-time Nigel Farage nemesis, Jose Manuel Barroso as an advisor and non-executive chairman of its international business.

Barroso served as president of the European Commission, the EU’s executive arm, from 2004 to 2014 and was prime minister of Portugal from 2002 to 2004.

According to Reuters, Goldman and other banks “are seen as particularly vulnerable to Brexit since they rely on the EU’s “passporting” regime that allows them to offer services across the bloc while basing most of their staff and operations in the UK. Banks have warned that if their British outposts lose their “passports” they will have to move some employees and business units to alternative bases in the EU.” Whether this means that Goldman is merely seeking an influential lobbying voice when it comes to getting an exemption from a post-Brexit fallout, or is simply seeking to expand its influence over all of Europe, remains unclear. After all it is not as if Goldman’s European ambitions are unknown. As we have shown before, Goldman is already the undisputed “Master of the Eurozone” courtesy of strategy placements in all key decision-making venues. 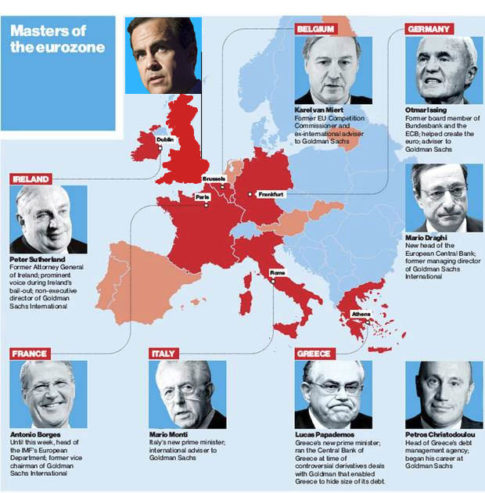 Goldman Sachs International, which Barroso will chair, is headquartered in London and of its roughly 6,000 staff fewer than 1,000 are based outside Britain.

Barroso is credited with helping the euro zone survive the 2009-13 debt crisis by establishing a financial rescue fund, enacting stricter budget rules and tightening financial regulation. He was also a signatory to the Lisbon Treaty that revamped the bloc’s complex institutions after French and Dutch voters rejected a European constitution.

Barroso will help the firm as it advises clients on dealing with the ensuing “challenging and uncertain economic and market environment,” Goldman Sachs International co-chiefs Michael Sherwood and Richard Gnodde said in the statement.

Goldman’s full press release is below:

José Manuel served as president of the European Commission from 2004 to 2014, and as prime minister of Portugal from 2002 to 2004. His perspective, judgment and counsel will add great value to our GSI Board of Directors, Goldman Sachs, our shareholders and our people.

Having first been elected to the Portuguese Parliament in 1985, José Manuel served as state secretary for home affairs, state secretary for foreign affairs and cooperation, and minister for foreign affairs in successive governments. In 1999, he was elected president of the Social Democratic Party and became the leader of the opposition. Prior to his political career, José Manuel’s academic positions included visiting professor at Georgetown University. Most recently, he was Frederick H. Schultz Class of 1951 visiting professor of International Economic Policy and a policy fellow at the Liechtenstein Institute, Woodrow Wilson School, at Princeton University. He is also visiting professor at the Catolica University in Lisbon and at the University of Geneva and the Graduate Institute of International Relations in the same city.