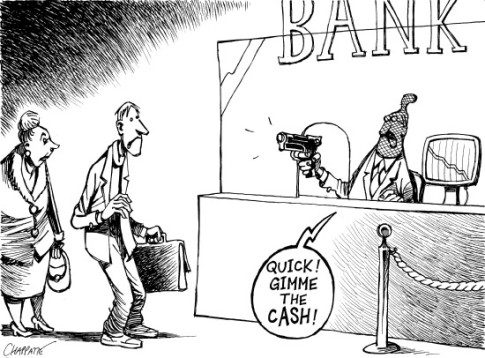 Ironically, the idea of a bank deposit tax was raised by Labor in 2013 and was criticized by Tony Abbott at the time. Much has changed in two years, and as ABC reports, assistant Treasurer Josh Frydenberg has indicated an announcement on the new tax could be made before the budget.

Mr Frydenberg is a member of the Government’s Expenditure Review Committee but has refused to provide any details.

“Any announcements or decisions around this proposed policy which we discussed at the last election will be made in the lead up or on budget night,” he said.

“There will be tough decisions in this year’s budget as there must be, but there will also be good news.”

For the banks and creditors, yes. For anyone who is still naive enough to save money in the hopes of deferring purchases for the future, not so much.

The banking industry has raised concerns about a deposit tax, saying it will have to pass the cost back onto customers.

Steven Munchenberg from the Australian Bankers’ Association said it would be a damaging move for the Government.

“It’s going to make it harder for banks to raise deposits which are an important way of funding banks. And therefore for us to fund the economy,” he said. “And we also oppose it because particularly at this point in time with low interest rates a lot of people who are relying on their savings for their incomes are already seeing very low returns and this will actually mean they get even less money.”

Don’t worry Steven, neither central banks nor government care about “a lot of people” – they just care about a select few. As for the banks, once China, and immediately thereafter Australia, launches QE as the entire world descends into a monetary supernova, and Australia’s banks are flooded with trillions in excess reserves like those in the US, all shall be forgiven. As a reminder, banks such as JPM are so flush with zero-cost cash from other sources, well one other source, they are now actively turning away depositors.

As for Australia, while central banks are untouchable and unaccountable to anyone (except their commercial bank directors and anyone else they secretly meet during those bimonthly sessions in the BIS tower in Basel), the government can be voted in and voted out. Especially a government that is about to break one of its main election promises:

The Federal Opposition has accused the Government of breaking an election promise by planning to introduce a tax on bank deposits.

The former Labor Government put forward the policy in 2013 to raise revenue for a fund to protect customers in the event of a banking collapse.

Shadow Assistant Treasurer Andrew Leigh said Treasurer Joe Hockey criticised the proposal at the time. “When we put it on the table Joe Hockey said that it was a smash and grab on Australian households just aimed at repairing the budget,” he said.

It is almost surprising, but not really, how when it comes down to money, the thin white line between “us” and “them” always disappears when the money runs out.

As for Australia’s savers, welcome to the NIRP world where savers in increasingly more countries are now on the endangered species list.

2 thoughts on “AND NOW: Australia To Start Taxing Bank Deposits”