– Al Qaeda Now Controls More Territory In The Arab World Than Ever Before (ZeroHedge, Jan 9, 2014): 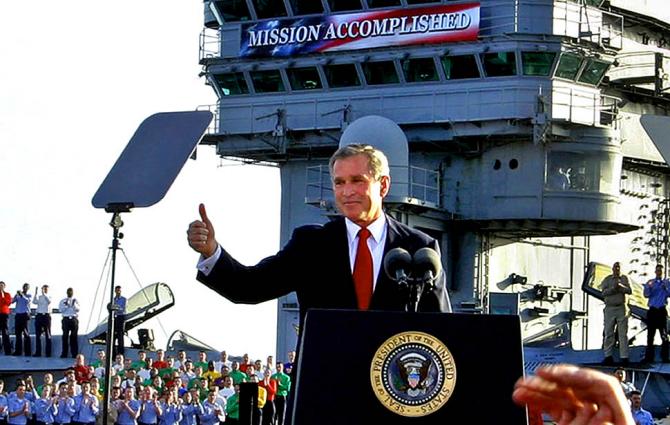 This was the neo-conservatives’ victory lap when they supposedly achieved one of their main stated goals: to discover and neutralize terrorist organizations, primarily al Qaeda.

In what can be described a truly ironic event and a major failure for America’s stated mission (because one can’t help but wonder at all the support various Al Qaeda cells have received from the US and/or CIA) of eradicating the Al Qaeda scourge from the face of the earth, we learn today that al Qaeda appears to control more territory in the Arab world than it has done at any time in its history. According to a CNN report “from around Aleppo in western Syria to small areas of Falluja in central Iraq, al Qaeda now controls territory that stretches more than 400 miles across the heart of the Middle East, according to English and Arab language news accounts as well as accounts on jihadist websites.” 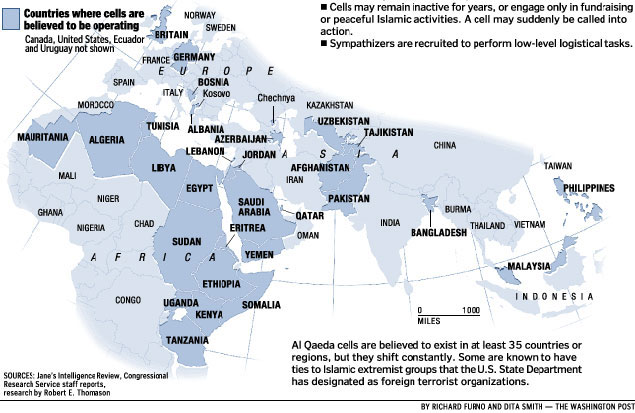 And nowhere is the surge of Al Qaeda more visible than in recent events in Iraq. From CNN:

The focus of al Qaeda’s leaders has always been regime change in the Arab world in order to install Taliban-style regimes. Al Qaeda’s leader Ayman al-Zawahiri acknowledged as much in his 2001 autobiography, “Knights Under the Banner of the Prophet,” when he explained that the most important strategic goal of al Qaeda was to seize control of a state, or part of a state, somewhere in the Muslim world, explaining that, “without achieving this goal our actions will mean nothing.”

Anbar is home to predominantly Sunni Muslims, who feel that that the Shiite-dominated Iraqi government of Prime Minister Nuri al-Maliki treats the Sunnis as second-class citizens.

Sectarian tensions in Anbar recently burst into several all-out revolts against the government, and the Islamic State of Iraq and Syria (ISIS), as the al-Qaeda affiliate there is known, quickly seized the opportunity to notch some battlefield victories.

Government forces increased their presence around Falluja in response and on Tuesday tribal leaders issued a statement urging people who had fled the city or stopped reporting to work to return.

America’s escapade in Syria – where it was merely a puppet for Qatari nat gas oligarchs – has also backfired.

ISIS is also operating in Syria, where it has established a presence in many areas of the Aleppo and Idlib Governorates in the northwest. In August, ISIS launched a propaganda series on video highlighting their activities in Syria, which includes interviews with fighters; the “graduation” of a group of mujahedin “cubs” (aged about 7 to 10 years old) from training, and sermons at local mosques preaching al Qaeda’s interpretation of Islam.

The al-Nusra front has claimed to control parts of at least a dozen Syrian towns. Those include sections of the ancient city of the Aleppo in the northwest, where fighters have been filmed running a community fair and preaching al Qaeda’s values to crowds of children. The group has also released videos on jihadist websites claiming that it is providing services to the people of several towns in the governorate of Idlib, which borders the Aleppo Governorate to the west. Al Nusra claims that it is a quasi-government and service-provider in the towns of Binnish, Taum, and Saraqib.

Al-Nusra fighters allied to al Qaeda function like a government in areas they control in Syria. The group provides daily deliveries of bread, free running water and electricity, a health clinic, and a strict justice system based on Sharia law in the eastern Syrian city of Ash Shaddadi, where it also took control of the city’s wheat silos and oil wells. In September a CNN reporting team concluded, “Al Qaeda has swept to power with the aim of imposing a strict Islamist ideology on Syrians across large swathes of Syria’s rebel-held north.”

In sum, al Qaeda affiliates now control much of northern and northwestern Syria as well as some parts of eastern Syria, as well as much of Anbar province, which is around a third of Iraqi territory.

It wouldn’t be a US diplomatic debacle without at least one soundbite from John Kerry. So here it is:

Secretary of State John Kerry said on Sunday that the United States will “do everything that is possible to help” the Iraqi government control al Qaeda’s expansion in Anbar, but stressed that no American troops would be sent back to the Middle Eastern nation . Last month, the United States quietly sent Hellfire missiles and surveillance drones to the Iraqi government to support their fight against increasing al Qaeda-related violence.

The question of how quickly the US “gift” was intercepted by Al Qaeda is rhetorical. The other rhetorical question is how long until the now much better armed (with US weapons) jihadists will turn those same weapons on the liberating Western powers. The US for now seems safe. Europe is a different matter.

For the United States the widening reach of al Qaeda in the Middle East doesn’t necessarily translate into an immediate threat at home. So far only a handful of Americans have fought in the Syrian conflict alongside al Qaeda’s affiliates there so concerns about some kind of “blowback” from the Syrian war in the U.S. are, at this point, unfounded.

In October for instance, British authorities arrested militants who were allegedly planning a terrorist attack. Two British officials who work on counterterrorism issues told us that that the militants had recently traveled to Syria.

Finally, none of this should come as a surprise to anyone. Ron Paul, for one, has long predicted precisely this chain of events. In this context his latest commentary, posted here over the weekend, bears repeating.

Iraq: The ‘Liberation’ Neocons Would Rather Forget

Remember Fallujah? Shortly after the 2003 invasion of Iraq, the US military fired on unarmed protestors, killing as many as 20 and wounding dozens. In retaliation, local Iraqis attacked a convoy of US military contractors, killing four. The US then launched a full attack on Fallujah to regain control, which left perhaps 700 Iraqis dead and the city virtually destroyed.

According to press reports last weekend, Fallujah is now under the control of al-Qaeda affiliates. The Anbar province, where Fallujah is located, is under siege by al-Qaeda. During the 2007 “surge,” more than 1,000 US troops were killed “pacifying” the Anbar province.  Although al-Qaeda was not in Iraq before the US invasion, it is now conducting its own surge in Anbar.

For Iraq, the US “liberation” is proving far worse than the authoritarianism of Saddam Hussein, and it keeps getting worse. Last year was Iraq’s deadliest in five years. In 2013, fighting and bomb blasts claimed the lives of 7,818 civilians and 1,050 members of the security forces. In December alone nearly a thousand people were killed.

I remember sitting through many hearings in the House International Relations Committee praising the “surge,” which we were told secured a US victory in Iraq. They also praised the so-called “Awakening,” which was really an agreement by insurgents to stop fighting in exchange for US dollars. I always wondered what would happen when those dollars stopped coming.

Where are the surge and awakening cheerleaders now?

One of them, Richard Perle, was interviewed last year on NPR and asked whether the Iraq invasion that he pushed was worth it. He replied:

I’ve got to say I think that is not a reasonable question. What we did at the time was done in the belief that it was necessary to protect this nation. You can’t a decade later go back and say, well, we shouldn’t have done that.

Many of us were saying all along that we shouldn’t have done that – before we did it. Unfortunately the Bush Administration took the advice of the neocons pushing for war and promising it would be a “cakewalk.” We continue to see the results of that terrible mistake, and it is only getting worse.

Last month the US shipped nearly a hundred air-to-ground missiles to the Iraqi air force to help combat the surging al-Qaeda. Ironically, the same al-Qaeda groups the US is helping the Iraqis combat are benefiting from the US covert and overt war to overthrow Assad next door in Syria. Why can’t the US government learn from its mistakes?

The neocons may be on the run from their earlier positions on Iraq, but that does not mean they have given up. They were the ones pushing for an attack on Syria this summer. Thankfully they were not successful. They are now making every effort to derail President Obama’s efforts to negotiate with the Iranians. Just last week William Kristol urged Israel to attack Iran with the hope we would then get involved. Neoconservative Senators from both parties recently introduced the Nuclear Weapon Free Iran Act of 2013, which would also bring us back on war-footing with Iran.

Next time the neocons tell us we must attack, just think “Iraq.”