When central banks buy securities, one of the immediate effects is to increase bank deposits, which adds to M2 (in the U.S., practically the Fed has bought from nonbanks, not banks). Whether banks maintain those added deposits as deposits, or convert them into other liabilities (or, by calling in loans, reducing or moderating the growth of their balance sheets), is an open question.

Actually it’s not. As the JPM London Whale episode taught us, it is the excess deposits on bank balance sheets courtesy of the Fed, that serve as collateral for marginable derivatives (IG9, HY9, ES, etc) which then can and are used by banks to chase risk higher, often with leverage that runs into the orders of magnitude. In other words, as the chart below shows, in the past week, the Fed injected a net $69 billion in risk-ramping power on the commercial bank balance sheets, and, more importantly, since the failure of Lehman, this amount is a record $2.308 trillion. 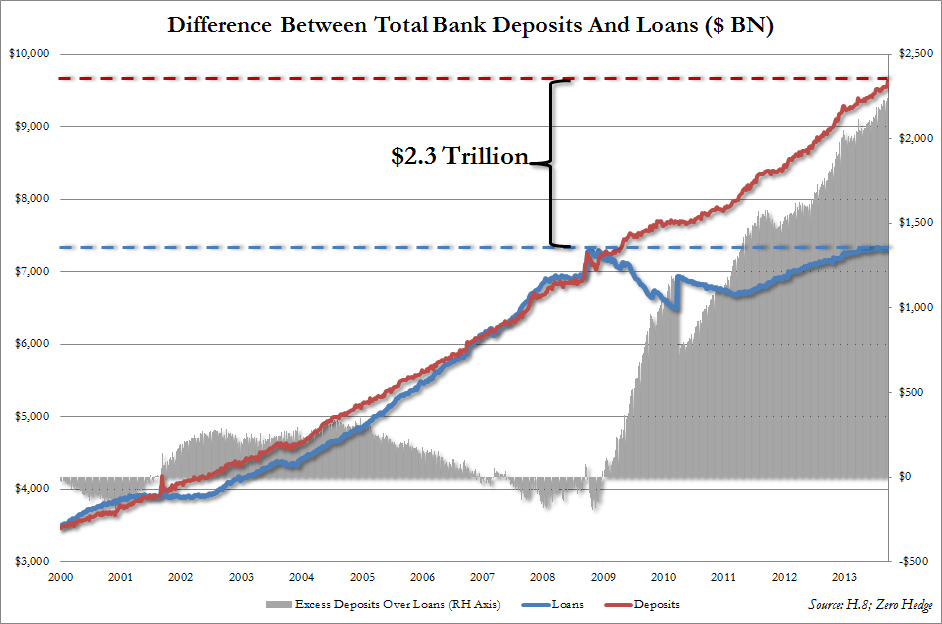 So for those confused where the money comes from to ramp equities ever higher on a daily basis for the duration of QE, and why the S&P correlates (and “causates”) exquisitely with the Fed’s balance sheet, now you know. More impotantly: don’t expect banks to lend out much if any real new loans as long as they can generate far greater and far less riskier returns simply by chasing risk in the capital markets.

The Biggest Banking Disconnect Since Lehman Hits A New Record