So much for the JPM “fortress balance sheet.” Moments ago the bank which 18 months ago stunned the world with the biggest prop trading loss in history, just reported its first quarterly loss under Jamie Dimon, missing expected revenue of $24 billion with a print of $23.88 billion, but it was net income where the stunner was in the form of a $0.4 billion net income. The reason: the fact that from the government’s best friend, Jamie Dimon has become the punching bag du jour, and having to pay $9.15 billion in pretax legal expenses, the biggest in company history.

While we had strong underlying performance across the businesses, unfortunately, the quarter was marred by large legal expense. We continuously evaluate our legal reserves, but in this highly charged and unpredictable environment, with escalating demands and penalties from multiple government agencies, we thought it was prudent to significantly strengthen them. While we expect our litigation costs should abate and normalize over time, they may continue to be volatile over the next several quarters.

Speaking of “strong underlying performance”, considering that the other key component of Q3 net income was a whopping $1.6 billion in loan loss reserve releases, one wonders just how truly strong Q3 earnings really were. But of course, this being Wall Street, all negative news is “one-time” and to be added back. Which is why JPM promptly took benefit for all charges, which means adding back the $7.2 billion legal expense and $992 MM reserve release after tax benefit. In short: of the firm’s $1.42 in pro forma EPS, a whopping $1.59 was purely from the addback of these two items. 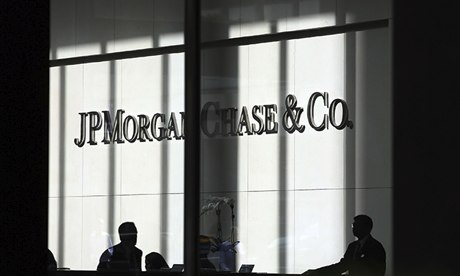 America’s biggest bank, JP Morgan, has plunged to a loss in the third quarter of 2013 after being weighed down by legal expenses of $9.2bn (£5.8bn).

Jamie Dimon, the bank’s chairman and chief executive, called the loss “painful”. “We are just trying to improve and move on. Remember, these things are related to multiple year events. Remember, we didn’t lose any money during the crisis,” he told analysts on a conference call.

Until last year, JP Morgan was thought to have weathered the financial crisis well, but it has since been hit by more than $900m in fines over the London Whale trading incident, and is now locked in talks about the penalties it will incur for the sale of sub-prime mortgage-backed loans in the run-up to the 2007 credit crunch. The settlement could cost a record $11bn.

After discussions, the bank took a $7.2bn legal charge – or $9.2bn before tax – which led the bank to report a loss of $400m for the quarter compared with a profit of $5.7bn the same time last year. It is the bank’s first quarterly loss for eight years.

Dimon, who is under pressure after the latest scandals, had held personal meetings with the US attorney general Eric Holder in an attempt to reach an agreement that could include $4bn of payments to consumers and $7bn of penalties. He said reaching a deal involved “multiple agencies, so you can imagine how complicated it is.”

Dimon said an otherwise strong performance had been “marred by large legal expense”. Marianne Lake, JP Morgan’s chief financial officer, cautioned that legal expenses were “significantly larger than even we could have anticipated even a short while ago.”

“We would love to reduce the uncertainty around this, but it is really hard to do and it will probably be lumpy,” Dimon told analysts. “There are multiple agencies involved in every case now: we just have to deal with it, and it will abate over time.

“One day it won’t be a big number. Our preference is to resolve it, and it is very hard to work with government and regulators. We want to do the right thing for our shareholders and hopefully over time we will make this a much smaller issue.”

Dimon made reference to the two firms JP Morgan rescued during the crisis – Bear Stearns and Washington Mutual – which were involved in the mortgage scandal.

“The board continues to seek a fair and reasonable settlement with the government on mortgage-related issues – and one that recognises the extraordinary circumstances of the Bear Stearns and Washington Mutual transactions, which were undertaken at the request or encouragement of the US government,” Dimon said.