few months ago when the new French socialist president gave details of his particular version of the “fairness doctrine” and said he would tax millionaires at 75%, we said that “we are rotating our secular long thesis away from Belgian caterers and into tax offshoring advisors, now that nobody in the 1% will pay any taxes ever again.” While there was an element of hyperbole in the above statement, the implication was clear: France’s richest will actively seek tax havens which don’t seek to extract three quarters of their earnings, in the process depriving France (and other countries who adopt comparable surtaxes on the rich) of critical tax revenues. It took three months for this to be confirmed, and with a bang at that. The WSJ reports that Bernard Arnault, the CEO of LVMH, and the richest man in France, has decided to forego hollow Buffetian rhetoric that paying extra tax is one’s sworn duty, and has sought Belgian citizenship.

Bernard Arnault, France’s richest man and chairman and chief executive of LVMH Moët Hennessy Louis Vuitton, is seeking Belgian citizenship, a move that comes as President François Hollande prepares to press ahead with a controversial tax on the country’s wealthiest citizens.

Georges Dallemagne, president of Belgium’s naturalization commission, said Mr. Arnault’s case was filed at the end of August and will be “treated like others.” Mr. Dallemagne said the process would take until “early next year, at best.”

Though the LVMH titan denies his move is fiscally motivated, the timing of Mr. Arnault’s request is sure to intensify the debate about whether Mr. Hollande’s tax policies are sparking an exodus of the country’s rich.

As a reminder, it took Monsieur Hollande four months to reneg on his promise to never bailout evil banks, when just last week he bailed out the second largest French home loan specialist, in the process pledging tens of billions in taxpayer funds. Precisely what he said he would not do. We expect Hollande will also reneg on his populist promises of exorbitant taxation of the wealthy once the Arnault backlash spreads among the remainder of the French “1%”, who just happen to pay the bulk of French taxes.

On the other hand, perhaps it won’t, and just like the US, France will become increasingly reliant on debt to fund its ever increasing budget deficits. As we showed before, this is the breakdown of how the US funds its $4 trillion (and growing) cash needs. What is obvious is that with time more and more of the funding need will be met through debt issuance, and thus, debt monetization. 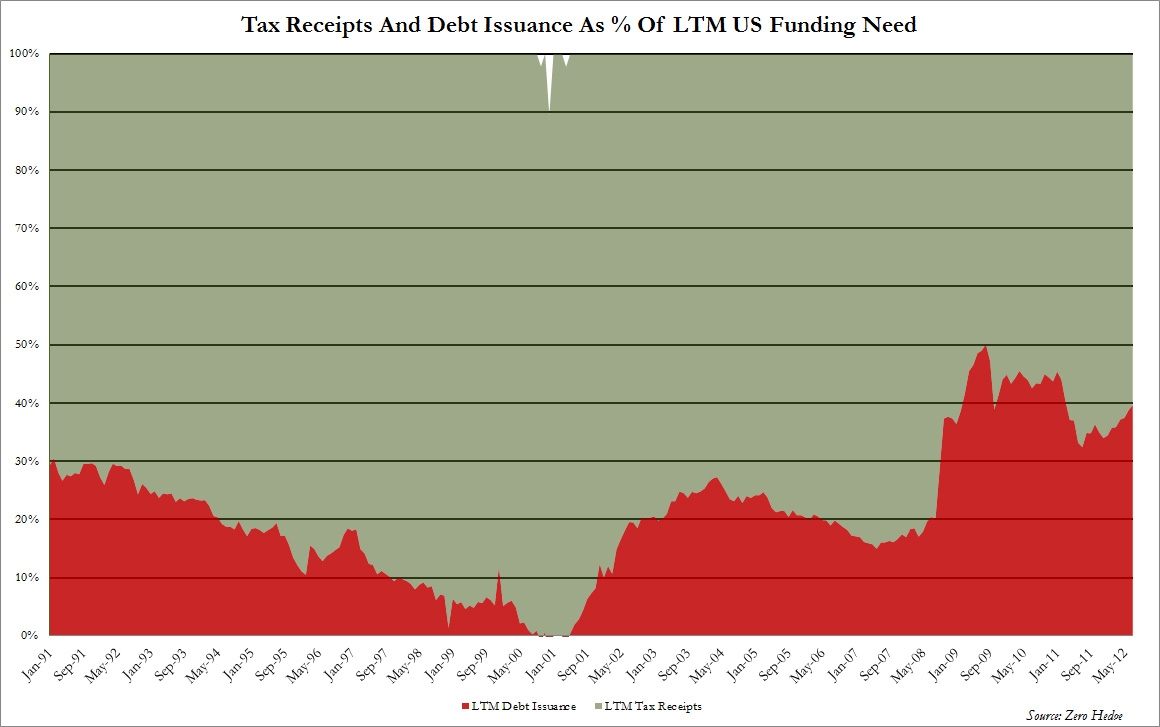 Paradoxically, and a continuation of our article from yesterday on the mechanics of QE, the US will need to raise its debt issuance, and thus accelerate its fiscal profligacy in order to allow Bernanke to monetize more debt, so that more brand new money can enter stocks (recall that the Russell 2000 has been the Fed’s only mandate for years) via the Fed’s LSAP channel, without impairing the liquidity of the now very much limited long end of the Treasury (and MBS) market.

Finally, it wouldn’t be the New Normal if this latest development in the socialist backlash was not accompanied by a hollow statement signifying nothing:

LVMH confirmed Mr. Arnault’s request in a statement, but stressed the billionaire would remain a taxpayer in France.

For one more week? One more month? In other news, subprime is contained. And speaking of amusing, and very much hollow, rhetoric, we wonder if Mr. Whitney Tilson, who may or may not be a millionaire any longer, still endorses this April 11 point of view:

A millionaire for higher taxes

Whitney Tilson is a hedge fund manager and a member of Patriotic Millionaires for Fiscal Strength.

This morning I was at the White House supporting President Obama in his call for Congress to pass the “Buffett rule.” This legislation — inspired in part by Warren Buffett’s exasperation upon learning that his assistant paid a greater percentage of her income in federal taxes than he did — would require anyone whose income exceeds $1 million a year to pay a minimum 30 percent in taxes. It would hit me hard. I haven’t finished my taxes for 2011, but in 2010, my federal tax rate was 21.4 percent; if the Buffett rule had been in effect, my federal tax bill would have been 40 percent higher. Some years, my taxes would probably be more than 50 percent higher.

Why am I okay with this? The answer has to do with simple math and basic fairness.

This country is running enormous and unsustainable budget deficits that will bankrupt us all if they are not narrowed — and there is no way to do that without both cutting spending and raising revenue. (Grover Norquist’s anti-tax pledge is pie-in-the-sky fantasy and dangerous demagoguery.) Everyone is going to have to make sacrifices as part of a comprehensive budget deal along the lines of Simpson-Bowles, with tens of millions of people getting smaller entitlement benefits, for example, and tens of millions of people paying higher taxes.

It’s not class warfare to say that people like me — who aren’t suffering at all in these tough economic times, who are in many cases doing the best we’ve ever done and who can easily afford to pay more in taxes with no impact on our lifestyle — should be the first to step up and make a small sacrifice.

I think most people agree with the idea of shared sacrifice, but for many, when push comes to shove, that principle goes out the window. I don’t kid myself that I’m making any real sacrifices. The men and women who have been fighting for the past decade in Iraq and Afghanistan — thousands of them coming home in coffins or missing limbs — are making true sacrifices. And when they enter the domestic workforce, they shouldn’t have to pay taxes at a significantly higher rate than the vast majority of millionaires pay.

Some critics of the Buffett rule point out that it would raise only an estimated $47 billion over 10 years, which is a sliver of the 2011 deficit of $1.3 trillion, let alone the national debt of $15.6 trillion. They’re right that this, by itself, won’t be enough. But we have to start raising money somewhere, and if it isn’t from people like me, it will have to come from people less fortunate than I am. Think of it this way: Every billion dollars not raised from millionaires is equal to a million average U.S. families each paying an extra $1,000 in taxes. That would be real hardship for a lot of families that, unlike mine, are struggling to make ends meet.

Other critics argue that there’s no need for anyone to pay more taxes, because our government is so ineffective and wasteful that we can generate the savings we need just by running it better. I disagree. While there’s always plenty of room for improvement, our government is actually quite effective and efficient. Our military and judicial systems and national parks are the best in the world. Unlike in countries where government corruption is rampant, I’ve never once been solicited for a bribe. And our police departments generally do a good job protecting citizens. My wife and I walk our dog in Central Park every night after 10 p.m. and have never feared for our safety.

I think that most people who complain about our government have no idea what they’re talking about because they’ve never been to a country with a bad government. I regularly visit Kenya (my parents retired there and my sister works there), I visited Ethiopia many times when my parents lived there, and growing up I lived for three years each in Tanzania and Nicaragua. So I’ve seen what life is like under corrupt, dysfunctional, underfunded governments. To quote Hobbes, it can be “solitary, poor, nasty, brutish and short.”

I am grateful for the effective government we have in this country, which is the absolutely necessary foundation for our wonderful capitalistic economic system that has benefited me so greatly. And I’m willing to do my fair share — in fact, more than my fair share — to help rein in our deficits and put this country on a more sustainable path.

Perhaps now that Whitney no longer has a need to pander to Buffett in every form, courtesy of the recent terminal blow up of his now former hedge fund T2 aka BRK/C (in everything but return of course), he may readdress his feelings on the matter.

Finally we leave readers with what we said last time we addressed this issue:

The good news is that with the entire world set to adopt 100%+ taxes on “wealthy” individuals as defined arbitrarily by Ph.Ds, there will be no place to hide.

The irony of course, is that while the central planners give with one hand, by ramping stocks through the issuance of unrepayable debt, which benefits primarily the 1% the bulk of whose assets are in equity-related products, with the other they demand an ever larger pound of flesh in the form of ever more creeping taxation. Sadly, what should be well-known by now is that the “rich” (whether defined by the “fairness doctrine” or otherwise) always win, and it is the poor and the nearly defunct middle class that ends up picking up the pieces. It always has, and it certainly will this time around as well.