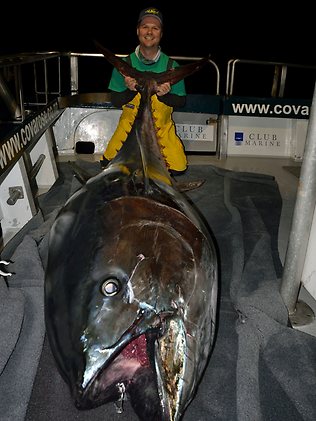 YOU know you’ve landed the catch of the day when experts advise you to test your fish for radioactivity. Mornington Peninsula fisherman Paul Worsteling lured a monster bluefin tuna 50km off the coast of Greymouth, New Zealand.

It took two hours and 58kg of tackle to land the 2.7m beast, estimated to weigh more than 275kg.

The fish, which looks like a prop from a B-grade horror flick, will be tested for radiation to find if fish schools affected by the Fukushima reactor meltdown in Japan have migrated around the world.

Worsteling, a host of Channel 10’s IFishTV, invited scientists from New Zealand Fisheries on a chartered vessel to explore this pocket of ocean, which yields 170,000 tonnes of blue grenadier each year.

The crew enjoyed a few slices of sashimi and anything the scientists didn’t use for research was delivered to a smoke house.