Gold just lost the $1600 handle for the first time since January 5th and is suffering its biggest one-day loss in over two months as Europe’s meltdown is driving broad liquidations. Are hungry Chinese central bankers more than happy to soak up the precious metal at a discount from levered longs liquidating into the European fiasco? 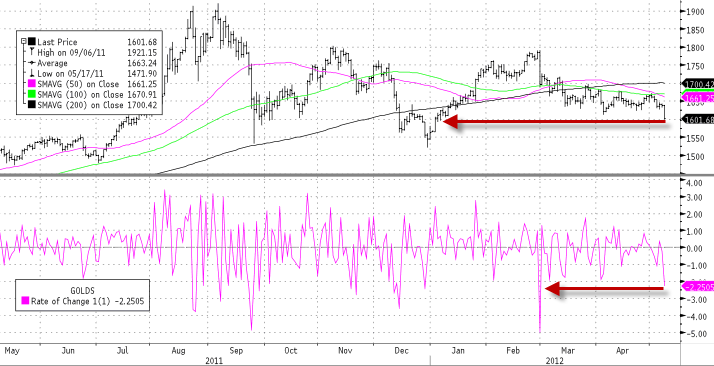 A month ago we ended up with the hilarious situation where the US was actively considering releasing petroleum from the Strategic Petroleum Reserve even as China was demonstratively and concurrently adding to its strategic inventory. Now, as the developed world is seeing day after day of gold hammering on amusing flights of fancy that central banks won’t be forced to engage in more and ever bigger rounds of monetary dilution, and where the seller apparently has no regard for getting a “good” price, but merely seeks to crash the bid stack slams various PM prices, we see the same inversion with gold. Because as Bloomberg reports, “Mainland China’s gold imports from Hong Kong surged more than sixfold in the first quarter, to 156 metric tons, adding to signs that the country may displace India as the world’s largest consumer of the precious metal on an annual basis.” And the punchline: “The purchases through Hong Kong may signal that the mainland is accumulating reserves, London-based brokerage Sharps Pixley Ltd. said in February. The nation last made its reserves known more than two years ago, stating them at 1,054 tons.” Yep ladies and gents: the PBOC is very grateful that it can add hundreds of tons of gold to its reserve holdings in a stealthy operation which it will announce only after its conclusion, at which point, like true 13F chasing lemmings, retail will send gold soaring. But in the meantime, dear hedge funds worried about your margin calls and 1 month performance reports, please proceed calmly along with the lemming herd, and keep pushing gold lower and cheaper for our new Chinese overlords, and for everyone else who, without P&L timing constraints, takes delight in such brief arbitrage opportunities.

Imports from Hong Kong were 135,529 kilograms (135.53 metric tons) between January and March, from 19,729 kilograms in the year-earlier period, according to data from the Census and Statistics Department of the Hong Kong government. Shipments in March rose 59 percent from February, yesterday’s data showed.

Demand has climbed in the world’s second-largest economy as rising incomes and curbs on property speculation boosted purchases. China may become the biggest user annually this year, according to a forecast from the producer-funded World Gold Council. Last year, total Indian demand including for jewelry and investment was 933.4 tons to China’s 769.8 tons.

Gold has lost 15 percent from its record $1,921.15 an ounce in September as the European debt crisis, combined with reduced expectations for further monetary easing by the Federal Reserve, boosted the dollar. Spot gold traded at $1,637.32 an ounce at 9:41 a.m. in Singapore, 4.7 percent higher this year

The geopolitical implications are obvious:

The prospect of China becoming the largest bullion user reflects the country’s economic ascendance. Per capita gross domestic product has more than doubled since 2000, according to World Bank data. The country is already the world’s top consumer of copper and biggest producer of steel.

Gold shipments to the mainland climbed for a third month in March to 62,913 kilograms, the Hong Kong data showed. That compares with 39,668 kilograms in February and 9,166 kilograms in March 2011. China doesn’t publish gold-trade data. Last year, imports from Hong Kong more than tripled to 431,226 kilograms.

The purchases through Hong Kong may signal that the mainland is accumulating reserves, London-based brokerage Sharps Pixley Ltd. said in February. The nation last made its reserves known more than two years ago, stating them at 1,054 tons.

Finally, we can only hope that all those who clamor for an RRR, or even interest rate, cut are wrong, as the paradigm shift in China as one of pursuing more inflation will light yet another major fire under gold, which would make purchases on the cheap problematic. In fact, the status quo, in which a very “uncivilized” China is buying as everyone else is selling, is ideal for all intents and purposes.