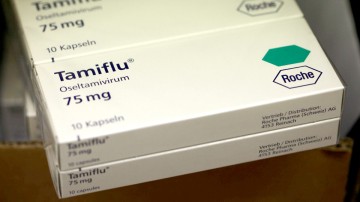 The study, published Monday in the British Medical Journal, found anti-virals shortened the duration of seasonal flu in children from between a half-day and 11/2 days. But the study found no clear evidence the anti-virals prevent complications in children with seasonal flu. It didn’t prevent asthma exacerbations in asthmatic children or lower rates of antibiotic prescriptions, for example.

The researchers did not study the effects of anti-virals on children with H1N1 flu, but said that based on some evidence, anti-virals might have “limited” effects on preventing complications.

“While morbidity and mortality in the current pandemic remain low, a more conservative strategy might be considered prudent, given the limited data, side effects such as vomiting, and the potential for developing resistant strains of influenza,” Matthew Thompson, a senior clinical scientist at Oxford, and his colleagues concluded.

The researchers conducted a scientific review of seven previous studies, known as a meta-analysis, on the use of anti-viral drugs for seasonal flu in children. Four studies looked at the treatment of influenza, the other three looked at the use of drugs to prevent infection.

Grant Stiver, a professor of medicine in infectious diseases at Vancouver General Hospital and the University of British Columbia, dismissed the findings. “I don’t think I would base any clinical judgment on this study,” Dr. Stiver said in an interview.

Trials done on Tamiflu have shown the drug to have benefits when it comes to seasonal flu, even in children, he said.

Source: The Globe and Mail