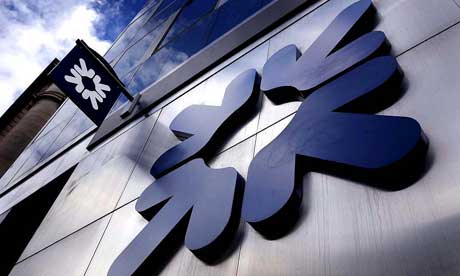 Royal Bank of Scotland, Britain’s second biggest bank until the credit crunch struck last year, confirmed today that is now majority-owned by the taxpayer after a £20bn bail-out by the government.

The Edinburgh-based bank announced this morning that its existing investors had shunned its £15bn cash call, leaving almost all the new shares in the hands of the government. The taxpayer now owns 57.9% of the business. Only a handful of investors took up the offer to subscribe to new shares at 65.5p because the bank’s share price had been trading below that level, giving them no incentive to support the cash call.

The government is also buying £5bn of preference shares which must be paid off before ordinary shareholders are able to receive dividends again.

The bank announced that just 56m of the new shares being issued had been bought, just 0.24% of the total.

The bank’s directors – including the departing former chief executive Sir Fred Goodwin – had agreed to take part in the share sale and like the taxpayer are already sitting on losses as the shares as worth less than the 65.5p they paid for them.

With Goodwin at the helm RBS had embarked on a rapid expansion, starting with the acquisition of NatWest in 2000 and a spate of other deals including insurance company Churchill and Charter One in the US before culminating in last year’s ill-timed takeover of the investment banking arm of Dutch bank ABN Amro.

Much of the expansion is now expected to be wound down by newly installed chief executive Stephen Hester who is a week into his new role and in the early stages of a sweeping strategic review which at the very least is expected to involve a dramatic reduction in staff numbers, particularly in the investment banking operations.

The government is now planning to appoint three non-executives to the board of RBS, which will also need a new chairman when Sir Tom McKillop retires after next year’s annual meeting. Along with Goodwin, who stopped being chief executive last week but will leave at the end of January, McKillop said “sorry” to shareholders last week for the bank’s near-collapse in the financial market meltdown.

The fundraising is the second embarked upon by RBS this year. In April it announced the £12bn rights issue – then the biggest every seen in London – to bolster its balance sheet that led to a host of other banks such as HBOS, Barclays and Bradford & Bingley racing to raise fresh funds by the summer. The RBS rights issue was priced at 200p – then a near 50% discount to its prevailing share price which has since collapsed. At its peak last year, RSB was worth £60bn but it was worth barely a tenth of that before today’s cash call bolstered its capital cushion and market value.