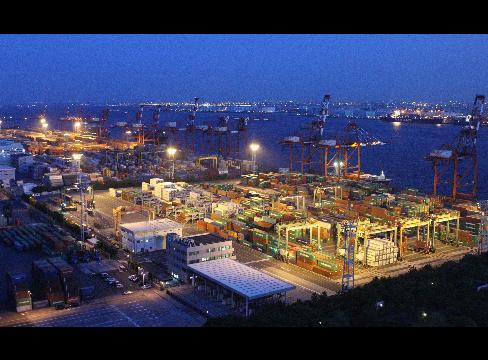 Containers are stacked at a shipping terminal in Tokyo on July 17, 2008. Photographer: Tomohiro Ohsumi/Bloomberg News

Companies surveyed said they plan the sharpest production cuts in 35 years as exports decline in the wake of the worst financial crisis since the Great Depression. Sharp Corp. said it may make fewer televisions and fire workers; Toyota Motor Corp. will lay off half of its temporary staff; and Canon Inc. has postponed building a 100 billion yen ($1 billion) printer cartridge factory in southwestern Japan.

“This is an unprecedented export recession,” said Richard Jerram, chief economist at Macquarie Securities Ltd. in Tokyo. “The world stopped turning for about a month and a half after the middle of September, so it’s not surprising you’re seeing horrendous numbers.”

The Nikkei 225 Stock Average rose 1.7 percent today. That wasn’t enough to stop the sixth monthly decline, the worst losing streak on record. The gauge has lost 44 percent this year, and the broader Topix index has tumbled 43 percent.

The yen traded at 95.26 per dollar as of 4:20 p.m. in Tokyo from 95.41 before the figures were published. Japan’s currency has risen 11 percent since September, adding to exporters’ woes by eroding their profits earned abroad.

Companies plan to reduce output 6.4 percent this month, the most dismal outlook since the survey began in 1973, and a further 2.9 percent in December, the Trade Ministry said. The government lowered its assessment of production, saying it’s on a “downward trend.”

“Today’s data is forcing me to reconsider the outlook; Japan’s recession could be more severe than the previous one,” said Yoshiki Shinke, a senior economist at Dai-Ichi Life Research Institute in Tokyo. “The shocking production number was the biggest disappointment.”

Japan’s economy shrank last quarter, entering the first recession since 2001. The International Monetary Fund predicts the U.S., Europe and Japan will all contract next year, the first simultaneous downturn since World War II.

Exports tumbled 7.7 percent last month, the fastest pace in seven years, and shipments to Asia, where Japan makes about half of its overseas sales, fell for the first time since 2002. The drop caused inventories to climb to the highest level in five years, today’s report showed.

“The numbers in Japan are stunningly bad,” said Glenn Maguire, chief Asia-Pacific economist at Societe Generale SA in Hong Kong. He said Japan’s reliance on exports of cars, TVs and stereos to the U.S. leaves it the most vulnerable in Asia to the drying up of credit available to American consumers.

Separate figures showed retail sales slumped in October and the ratio of jobs available to each applicant slid to 0.80, the lowest since May 2004. The unemployment rate unexpectedly fell to 3.7 percent from 4 percent as people gave up seeking work.

“It would be wrong to interpret this number as a sign of improvement in the workforce,” said Koji Katoh, the bureau’s director of labor statistics. “People probably aren’t looking for jobs given all the news that the economy is deteriorating.”

“It’s a social tragedy that people who want jobs can’t get them,” Economic and Fiscal Policy Minister Kaoru Yosano said. The worsening labor market “is an issue the government and the ruling coalition should be worried about.”

Inflation slowed for a second month, the government said today. Consumer prices excluding fresh food rose 1.9 percent from a year earlier. Lower costs alone may not spur spending by households, whose sentiment has slumped to the worst on record.

“The effect of cheaper goods is being outweighed by negative factors such as the gloomy outlook for incomes and the job market,” said Junko Nishioka, an economist at RBS Securities Japan Ltd. in Tokyo.