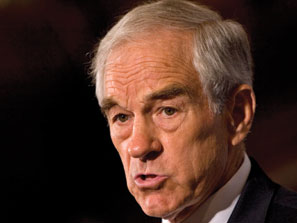 Ron Paul, whose libertarian-leaning candidacy for the Republican presidential nomination spurred millions of supporters, says the federal government could do much to repair the economy short of regulating.

While running for the Republican presidential nomination, Rep. Ron Paul of Texas frequently sounded the alarm regarding the nation’s fiscal health. Years ahead of the current economic crisis, Paul was questioning the nation’s debt level, now an acutely pressing issue amid all the recent stock market volatility.

With the Treasury Department and the Federal Reserve rapidly moving toward more government intervention in the marketplace while trying to stabilize the nation’s banks and shore up its financial institutions, Paul has argued for a hands-off approach. He opposed both versions of the financial rescue plan that came before the House – the first one, which was rejected, and the second, which was passed and signed into law.

Politico’s David Mark interviewed the 10-term congressman, who has still not endorsed Republican John McCain for president. Here are some excerpts.

Q: With the stock market still in flux and the risk of massive financial failures growing, what’s the worst-case economic scenario you envision over the next couple of years?

A: The worst part could be that this would linger for a decade or more. In fact, a very serious recession or depression is on schedule. You cannot avoid it. Eventually it has to come, but it doesn’t have to end badly. We could take our lumps, save money, pay our bills, restore liberty, and in a year we could have the most booming economy ever. But it would take a complete change in attitude.

If we continue to believe it’s freedom, capitalism and private markets that are the problems, we’re in for very bad times.

And it’s going to be used to further undermine our individual freedoms. We’re already seeing the nationalization of many industries. We’re going to all be a lot less free. I worry more about the loss of liberty and the socializing of our country.

Q: How will the current financial crisis affect everyday Americans?

A: We’re going to see inflation on a large scale. Inflation comes from increasing the money supply like we’ve been doing. The money supply is still going up, and the purchasing power of the dollar is not going up. The individual consumer isn’t saying, “Prices are going down, and I now have more money in my pocketbook.”

A: Greenspan, presidents of both parties and members of Congress bear some of the blame. He was there pumping money like crazy when it wasn’t backed by anything. The ideology has been around a long time, and he was responsible for pushing it along. This contradicted his basic free-market beliefs. He himself has warned about stealing value. But he still orchestrated this effort. He became chairman in 1987, and we saw the stock market crash almost immediately. He was steering the economy through money policy during that time. But the system’s been around a long time, and he was working within the system.

I date the current bubble to 1971, when Bretton Woods ended. [Bretton Woods refers to the post-World War II system that allowed governments to sell their gold to the U.S. Treasury at $35 an ounce.] This credit crunch should be seen as a system built on a flawed monetary theory. You can’t sit there and create new money to everything that’s offered. If that’s the case, we’d all be rich.

Q: Are we too averse to even minor recessions? Doesn’t that create an unnatural comfort level in taking on new debt?

A: Nobody wants a recession, but I compare it in medicine to getting somebody off drugs. You get to a point where maybe the patient’s going to die if you don’t get off drugs. People like to be praised for doing something – now they’re doing it wholesale. It has nothing to do with fixing the problem.

We have the Nancy Pelosis of the world being best friends with Henry Paulson and George W. Bush. They’re not capable of managing the system. You can’t price-fix money; you can’t price-fix interest rates. We’ve been fixing interest rates for decades. Now we’re trying to fix the price of worthless assets. When wage and price controls were imposed in 1971, the markets shut down and the economy tanked. As soon as you fix prices, you cause things to freeze up. They don’t understand markets.

Q: Should the federal government be taking any action?

A: There’s a lot the government could be doing to explain to people what’s happening. … You can do a lot of things instead of regulation. When Enron failed, we passed Sarbanes-Oxley, which was counterproductive.

We need less regulation, other than of the Federal Reserve. They shouldn’t be allowed to fix interest rates. We should encourage people, if anything, to save money rather than spend money.

Today, capital only comes from a printing press. Lower taxes, less regulation, change the rules of the Federal Reserve. We also need to change our foreign policy. What we’re facing today is an admission that we can’t afford to run a lavishly expensive empire. We need to bring all our troops home.

This idea that foreign policy is not connected directly to economic policy is total foolishness. This is what always bankrupts empires. It did it to the Soviets. Osama bin Laden knew it, and he sucked us in.

This is a wonderful time to come to our senses and have a restoration.