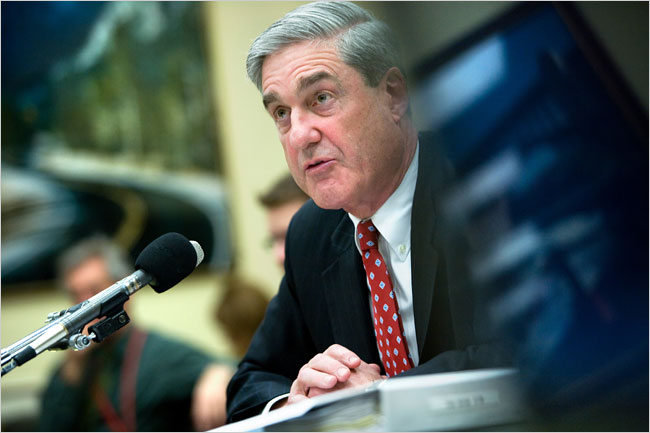 WASHINGTON – The Federal Bureau of Investigation is struggling to find enough agents and resources to investigate criminal wrongdoing tied to the country’s economic crisis, according to current and former bureau officials.

The bureau slashed its criminal investigative work force to expand its national security role after the Sept. 11 attacks, shifting more than 1,800 agents, or nearly one-third of all agents in criminal programs, to terrorism and intelligence duties. Current and former officials say the cutbacks have left the bureau seriously exposed in investigating areas like white-collar crime, which has taken on urgent importance in recent weeks because of the nation’s economic woes.

The pressure on the F.B.I. has recently increased with the disclosure of criminal investigations into some of the largest players in the financial collapse, including Fannie Mae and Freddie Mac. The F.B.I. is planning to double the number of agents working financial crimes by reassigning several hundred agents amid a mood of national alarm. But some people inside and out of the Justice Department wonder where the agents will come from and whether they will be enough.

So depleted are the ranks of the F.B.I.’s white-collar investigators that executives in the private sector say they have had difficulty attracting the bureau’s attention in cases involving possible frauds of millions of dollars.

Since 2004, F.B.I. officials have warned that mortgage fraud posed a looming threat, and the bureau has repeatedly asked the Bush administration for more money to replenish the ranks of agents handling nonterrorism investigations, according to records and interviews. But each year, the requests have been denied, with no new agents approved for financial crimes, as policy makers focused on counterterrorism.

According to previously undisclosed internal F.B.I. data, the cutbacks have been particularly severe in staffing for investigations into white-collar crimes like mortgage fraud, with a loss of 625 agents, or 36 percent of its 2001 levels.

Over all, the number of criminal cases that the F.B.I. has brought to federal prosecutors – including a wide range of crimes like drug trafficking and violent crime – dropped 26 percent in the last seven years, going from 11,029 cases to 8,187, Justice Department data showed.

“Clearly, we have felt the effects of moving resources from criminal investigations to national security,” said John Miller, an assistant director at the F.B.I. “In white-collar crime, while we initiated fewer cases over all, we targeted the areas where we could have the biggest impact. We focused on multimillion-dollar corporate fraud, where we could make arrests but also recover money for the fraud victims.”

But Justice Department data, which include cases from other agencies, like the Secret Service and Postal Service, illustrate the impact. Prosecutions of frauds against financial institutions dropped 48 percent from 2000 to 2007, insurance fraud cases plummeted 75 percent, and securities fraud cases dropped 17 percent.

Statistics from a research group at Syracuse University, the Transactional Records Access Clearinghouse, using somewhat different methodology and looking only at the F.B.I., show an even steeper decline of nearly 50 percent in overall white-collar crime prosecutions in the same period.

In addition to the investigations into Fannie Mae and Freddie Mac, the F.B.I. is carrying out investigations of American International Group and Lehman Brothers, and it has opened more than 1,500 other mortgage-related investigations. Some F.B.I. officials worry privately that the trillion-dollar federal bailout of the financial industry may itself become a problem because it contains inadequate controls to deter fraud.

No one has suggested that a quicker response would have averted the mortgage meltdown, but some officials said a faster reaction might have deterred more of the early schemes that seized on loose federal lending regulations.

“They were very late to the game,” Representative Zoe Lofgren, a California Democrat who has quarreled with the F.B.I. over its financing priorities, said of the bureau’s response to the mortgage crisis. “They were not on top of this, and they’re just now starting to really do something.”

Republicans and Democrats in Congress are pushing for a more aggressive response by the F.B.I. Representatives Mark S. Kirk, an Illinois Republican who sits on the House appropriations committee, and Chris P. Carney, a Pennsylvania Democrat, called on Congress to triple the F.B.I.’s financing for financial crimes investigations.

“To fix our system and prevent a repeat of the events we now see,” they wrote in a letter this month to Robert S. Mueller III, the F.B.I. director, “we have got to set an example by bringing the full might of federal law enforcement against the people who illegally profited or destroyed companies at the expense of our country.”

In public, Mr. Mueller has said that the bureau is doing more with less, when it comes to criminal prosecutions. And Justice Department officials have repeatedly asserted the administration’s commitment to fight violent and white-collar crime even as they have not provided the bureau additional resources.

But current and former officials say Mr. Mueller has lost a behind-the-scenes battle with the Justice Department and the Office of Management and Budget to replenish the criminal ranks.

Interviews and internal records show that F.B.I. officials realized the growing danger posed by financial fraud in the housing market beginning in 2003 and 2004 but were rebuffed by the Justice Department and the budget office in their efforts to acquire more resources.

“The administration’s top priority since the 9/11 attacks has been counterterrorism,” Peter Carr, a Justice Department spokesman, said. “In part, that’s reflected by a significant investment of resources at the F.B.I. to answer the call from Congress and the American public to become a domestic intelligence agency in addition to a law enforcement agency.”

From 2001 to 2007, the F.B.I. sought an increase of more than 1,100 agents for criminal investigations apart from national security. Instead, it suffered a decrease of 132 agents, according to internal F.B.I. figures obtained by The New York Times. During these years, the bureau asked for an increase of $800 million, but received only $50 million more. In the 2007 budget cycle, the F.B.I. obtained money for a total of one new agent for criminal investigations.

In 2004, one senior F.B.I. official, Chris Swecker, warned publicly that a flood of fraudulent mortgage deals had the potential to become “an epidemic.” Yet the next year, as public warnings about fraud in the subprime lending markets began to approach their height, the F.B.I. had the equivalent of only 15 full-time agents devoted to mortgage fraud out of a total of some 13,000 agents in the bureau.

That number has grown to 177 agents, who have opened 1,522 cases. But the staffing level is still hundreds of agents below the levels seen in the 1980s during the savings and loan crisis.

F.B.I. officials said they had had no choice but to make the cuts in the criminal division, which they said were necessary to expand the bureau’s national security effort, particularly in the wake of criticism of the bureau’s performance in failing to detect the Sept. 11 plot.

In white-collar crime, they said the bureau has given up only lower-level cases of marginal significance that might have never been prosecuted anyway. They say they have focused the available criminal resources on public corruption and other difficult crime issues in which the F.B.I. can make a unique contribution.

“We only had a finite number of white-collar crime agents available to address the threat that mortgage fraud posed,” said Joseph Ford, who retired from the F.B.I. this year and once served as its chief financial officer.

The Justice Department is relying more than ever on the state and local authorities to pick up the slack through joint task forces. And private investigators say that companies victimized by fraud are turning to them in increasing numbers because they are unable to attract much attention from the F.B.I. anymore.

In some instances, private investigative and accounting firms are now collecting evidence, taking witness statements and even testifying before grand juries, in effect preparing courtroom-ready prosecutions they can take to the F.B.I. or local authorities.

“Anytime you bring to the F.B.I. a case that is thoroughly investigated and reduce the amount of work for investigators, the likelihood is that they will take the case and present it for prosecution,” said Alton Sizemore, a former F.B.I. agent who is a fraud examiner for Forensic Strategic Solutions in Birmingham, Ala.

One American company facing extortion demands last year from a computer hacker used private investigators from the Kroll firm to do much of the legwork in the case as the F.B.I. monitored and directed the situation behind the scenes, said Daniel Karson, executive managing director for Kroll. The private investigators even went undercover and set up a sting operation that led them to Germany, where the authorities made an arrest.

Mr. Karson said the F.B.I. no longer had the resources to take on such lower-level cases by itself. “When you come in with a garden variety, plain vanilla crime, you may have to stand in the queue,” he said.

Some critics question whether the shift indicates not just a lack of resources, but a lack of interest by the Bush administration.

After the collapse of Enron in 2002, the Justice Department moved aggressively against corporate fraud – too aggressively, in the view of some people within the administration. It set up a national task force to tackle the problem, garnered hundreds of convictions at companies like WorldCom, Adelphia and Enron, and forced the closure of Arthur Andersen, the accounting firm, for its role in the Enron collapse.

But several former law enforcement officials said in interviews that senior administration officials, particularly at the White House and the Treasury Department, had made clear to them that they were concerned the Justice Department and the F.B.I. were taking an antibusiness attitude that could chill corporate risk taking.

This spring and summer, as public concerns about the subprime mortgage crisis were growing, Attorney General Michael B. Mukasey rejected repeated calls for the creation of a national task force like the one used after the Enron collapse. The attorney general likened the problem to “white-collar street-crime” that could best be handled by individual United States attorneys’ offices.

Paul J. McNulty, who served as deputy attorney general under Alberto R. Gonzales, said the complexity of white-collar investigations and the shortage of investigators had driven a decline in high-profile cases.

“There’s no question that the department has been stretched thin when it comes to resources generally, and that has affected white-collar enforcement in a variety of areas,” Mr. McNulty said in an interview.

“What happened is that the first years after the Enron collapse, there were some very high profile, noticeable cases – the low-hanging fruit – that gave Justice the opportunity to rack up some very big wins,” he said. “Those cases played themselves out and it became tougher to find those big cases.”