Professor Hayakawa went to Koriyama City in Fukushima Prefecture and walked in Kaiseiyama Park right near the City Hall. Compared to his walk in Edogawa-ku, Tokyo on the previous day, the radiation levels in Koriyama City is markedly higher (no surprise).

This time, the professor is armed only with his personal survey meter that only measures gamma ray. He seems to have a protective case on the survey meter, so I don’t think he is laying down the survey meter “naked” on the grass or dirt. (He’s been doing this for one year now in various locations, after all.)

He took the measurement of “black dust” at 4 locations:

EveryTrail – Find the best hikes in California and beyond

armed with 4 different radiation survey meters. One of the reasons he went to Fukushima was apparently to test the survey meters and compare the readings. The entire walk took 7 hours yesterday, says Hayakawa in his tweet, nothing compared to mountain climbing. (He’s a volcanologist.)

4.164 microsieverts/hour on the “black dust” – roadside sediment of soil and organic materials. (It is not just in Minami Soma City, where the highest radioactive cesium density in the “black dust” so far is 3.43 million becquerels/kg.)

Over 10 microsieverts/hour (all his survey meters went overscale) at the rain gutter.

2.3 microsieverts/hour on the lawn in front of the City Hall, 1.5 microsievert/hour 1 meter off the lawn.

For detailed locations and measurements, see his blog post (in Japanese).

Though Gunma university is almost meaningless for the world, Prof Hayakawa has been doing the great job by making the detailed radiation map.

He is an expert of volcanic ash. He used his knowledge, he estimated the flow of the plume and made the map which is more accurate than the one of the government.

He also warned about eating vegetables from eastern Japan based on his own map, which is very rational.

Stakeholder of the farmers or Tepco complained to Gunma university and had the president warn Prof Hayakawa.

It’s becoming harder and harder to tell the truth. (Source)

Our university is a national university run by government’s tax. However, Prof Hayakawa’s comments on the internet have been hurting Fukushima people or farmers. It violates the employment regulation not to damage the name recognition of Gunma university. We expect you to refrain yourself on the internet.
If you repeat this kind of inappropriate speech ,we will take any disciplinary action against you. 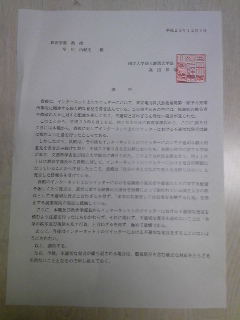 from his own university.

He was reprimanded by the university president for his “insensitive and inappropriate” remarks about “disaster victims” in Fukushima on his Twitter and blog, and is threatened with “disciplinary measures” that include termination from his position.

There are four types of “disciplinary measures” for public employees like Hayakawa: termination, suspension without pay, pay cut, and reprimand. He already got the last one.

He is the one who put out the radiation contour map from the very early days of the disaster. He is very much politically incorrect, not afraid to say things as they are.

Professor Hayakawa tweeted the entire reprimand live, after warning the university that he was tweeting live.

Then the head of the department came and forbid him to have an open house in his own office, but somehow that must have gotten resolved, and Professor is speaking with the media.

(And here’s the link to the video recorded live.)