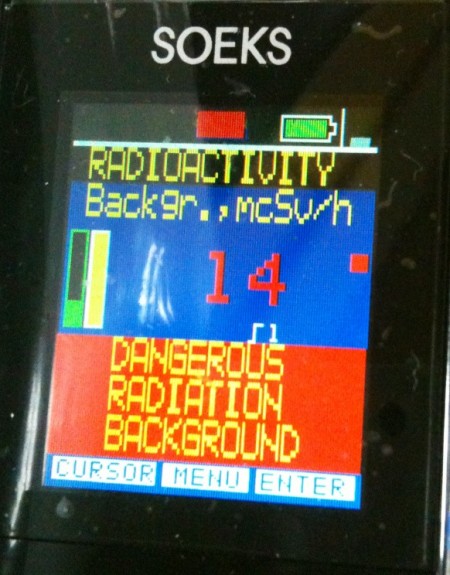 Around the end of July, I had the professional cleaners wash the roof of our house.
The roof was covered with something like this yellow moss. It was 0.7 μSv/h on its surface.

I took 20g of it by a kitchen knife. Radiation meter indicated it was red zone, 1.2 μSv/h.

I haven’t measured 1.2μSv/h from merely 20g of sample even around here known to be hotspot.

It was totally washed off after cleaning, radiation level was decreased a little bit, 0.4 μSv/h on the surface, but the yellow substance was still with mud in the rain gutter.
I took 3.6 kg of it with the perfect protective clothing (tyvek, gas mask, goggles, plastic gloves).
I packed the clothing soon after taking off the sample, had shower to clean eyes, ears, nostrils carefully.
This is very dangerous, please don’t do it. I can’t take a responsibility if something happened to you.

Professor Hayakawa went to Koriyama City in Fukushima Prefecture and walked in Kaiseiyama Park right near the City Hall. Compared to his walk in Edogawa-ku, Tokyo on the previous day, the radiation levels in Koriyama City is markedly higher (no surprise).

This time, the professor is armed only with his personal survey meter that only measures gamma ray. He seems to have a protective case on the survey meter, so I don’t think he is laying down the survey meter “naked” on the grass or dirt. (He’s been doing this for one year now in various locations, after all.)

He took the measurement of “black dust” at 4 locations:

EveryTrail – Find the best hikes in California and beyond

A Japanese magazine reported they measured 186 Bq/kg from tap water in Kashiwa.

They used the dosemeter named JG22N. JG22N picks up beta ray and converted it into the energy of cesium 137.

It therefore might have picked up strontium, iodine, and tritium and converted it all to cesium 137.

Tritium has almost never been measured from tap water or rain though it acts exactly like water.

Just for reader’s information, at the check point of off-limits area, where is 30km area from Chernobyl, it is 0.4μSv/h.

And these hotspots are everywhere:

… and it should get everyone’s attention, because this is GENOCIDE.

KASHIWA, Chiba–A radiation hotspot in Kashiwa has still not been decontaminated a week after radiation of 57.5 microsieverts per hour was recorded on a city-owned plot of land.

The city insists such a high level of radiation is beyond the level a local government can handle on its own, though it decided to conduct surveys to find other hotspots after many residents expressed anxiety over the issue.

The Kashiwa municipal government said last Friday that radiation of 57.5 microsieverts per hour had been detected about 30 centimeters below the surface of the plot of land. Its subsequent examination of soil at the location detected radioactive cesium of up to 276,000 becquerels per kilogram.

Airborne radiation of 2 microsieverts per hour was recorded one meter above the ground–the same level detected in Iitatemura, Fukushima Prefecture, which was designated part of the expanded evacuation zone after the beginning of the crisis at the Fukushima No. 1 nuclear power plant.

Read moreKashiwa Government Insists Being Unable To Handle Radiation Hotspot On Its Own (Daily Yomiuri, Oct. 28, 2011)