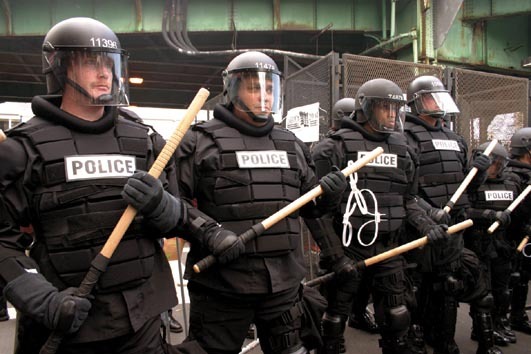 In 2010, the US Army’s Operating Concept 2016-2028 was published and explains how armed forces in the US and overseas will behave in the future. Specific tactical operations, special “theater”, and organized forces are outlined along with the capabilities and priorities of the US armed divisions.

In simple terms: a full spectrum operations manual that details stratagems both domestic and foreign.

Presidential administrative National Security Strategy documents explain how to defend the Republic within domestic borders with suggested scenarios where a group of political reactionaries commandeer a prominent area of a town or city which requires that the US Army support local law enforcement in conjunction with state officials – including local government representatives.

In times of domestic insurrection, the Executive Branch can enforce armed support to state governments and local police departments with or without their approval because the continuity of government is the endgame and must be preserved. In this event, domestic intelligence gathering become paramount to maintain a clear chain of military command to be able to stop the home-grown insurgency. This would empower the Department of Homeland Security with the approval of the President, to enact the Insurrection Act and deploy armed troops with in the US to stop rebellion, insurrection, and lawlessness. While the initial powers are reserved for the state and local governments, and Posse Comitatus (PCA) restricts and delays the Executive Branch in enforcement, the current presidential administration with the aid of the Pentagon is seeking to rescind the PCA in order to facilitate control over domestic terrorism.