While today’s market dump was certainly dramatic, it was a function of the scant liquidity in the market (as we warned would be the case first thing) and outsized moves following last week’s mauling, not the result of any fundamental (or not so fundamental) news.

That could change tomorrow, and change for the worse, because as Barclays reminds us, tomorrow is when the European Court of Justice (ECJ) is scheduled to hear testimony on the ECB’s non-existent Outright Monetary Transactions program (OMT). Recall that the OMT is the imaginary (again: non-existent) byproduct of Draghi’s “whatever it takes” speech: a byproduct that was supposed to exist purely in the imaginary realm (as it was merely a verbal bluff, one which was never meant to be actually activated), and never actually take practical shape (hence, why the OMT’s legal term sheet still does not exist, over two years later).

Sadly for Draghi, and the entire Deus Ex theater that managed to send European peripheral bonds from record wides yields to record low, tomorrow it will attain some much dreaded shape.

And while a ruling on the legal questions forwarded by Germany’s Constitutional Court is not expected this year, the hearing and questions posed by EU judges may give some early insights into their views and to what extent they might share the view of the German court that, unless several restrictions are imposed, the OMT should be considered illegal under European law.

In what was a shocking and disappointing at the same time decision, overnight the German Constitutional court, which had been contemplating the legality of the ECB’s still non-existent OMT program, conceived in July 2012 to prevent the collapse of the Eurozone and still only existing in Mario Draghi’s head as it has zero legal documentation supporting it, said that, in its judgment, the ECB’s Outright Monetary Transactions program likely exceeded the central bank’s powers.

“There are important reasons to assume that [the OMT] exceeds the European Central Bank’s monetary policy mandate and thus infringes the powers of the member states, and that it violates the prohibition of monetary financing of the budget,” the German court said Friday. “Subject to the interpretation by the Court of Justice of the European Union, the Federal Constitutional Court considers the OMT decision incompatible with primary law,” the German court said.

The last few minutes have seen markets taking a decidedly negative stance. Led by FX carry, risk-assets in general are rolling over. Some attributed it to Bernanke waking the devil from his slumber:

but it appears that the decision of Germany’s Top court is the market-moving event:

Instantaneously EUR is tumbling, financials are dropping, and the ‘promise’ of Draghi’s tail-risk killer is perhaps being removed. Remember, the high court is due to vote in June on whether the ESM is constitutional under German law and this rejection of ‘OMT’ leaves that decision much more in limbo than the market was expecting. 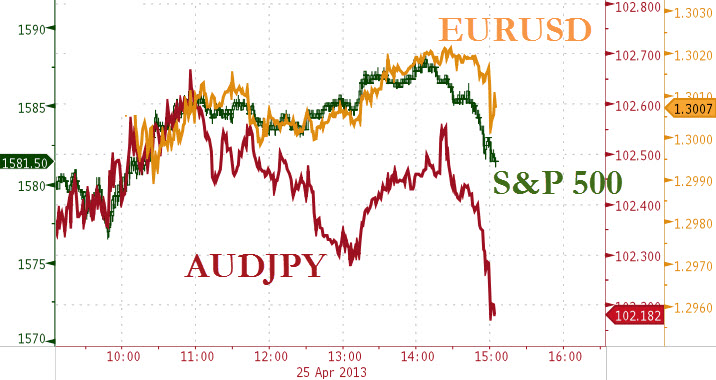 The eye of the hurricane over Southeast Europe may soon be shifting, exposing Greece to the same 150 mph gale turmoil everyone has grown to love and expect over the past three years as soon as this month, when a new proposal by Greece is due on how to cut a massive 150,000 public sector jobs: a move which will result in an immediate surge in public unrest, and an exponential jump in strike activity. As Bloomberg reports, “Greece is locked in talks with international creditors in Athens about shrinking the government workforce by enough to keep bailout payments flowing. Identifying redundant positions and putting in place a system that will lead to mandatory exits for about 150,000 civil servants by 2015 is a so-called milestone that will determine whether the country gets a 2.8 billion-euro ($3.6 billion) aid installment due this month. More than a week of talks on that has so far failed to clinch an agreement.”

Europe Q4 GDP declines 0.6%, and economy contracts 0.9%. No one should be surprised at the latest disappointing European GDP numbers, but they hide important trends – Germany’s Q4 0.6% GDP drop was worse than expected, although the expectations remain for growth later this year. France is going to miss the 3% GDP deficit target because of low growth. For the rest of Europe the numbers were generally worse than expected – and no one credible is talking about significant growth prospects. (Sure, the Euro Elites are telling us they see growth tomorrow.. but tomorrow is always tomorrow..) 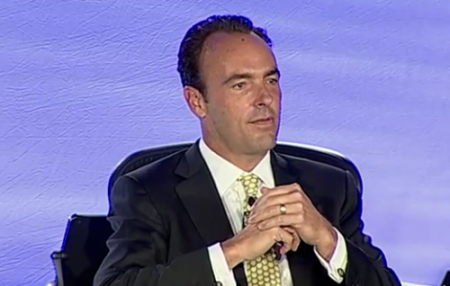 Read moreKyle Bass: Fallacies Such As MMT Are ‘Leading The Sheep To Slaughter’ And ‘We Believe War Is Inevitable’

From the ECB’s Virtual Currency Schemes, aka the “Bash Bitcoin Boondoggle” (p. 27):

A Ponzi scheme is an investment fraud that involves the payment of purported returns to existing investors from funds contributed by new investors. Ponzi scheme organizers often solicit new investors by promising to invest funds in opportunities claimed to generate high returns with little or no risk. In many Ponzi schemes, the fraudsters focus on attracting new money to make promised payments to earlier-stage investors and to use for personal expenses, instead of engaging in any legitimate investment activity

Considering that this elucidation comes from the very same entity that launched the SMP, LTRO, OMT, EFSF, ESM, oh, and of course, TARGET2, and whose head said to not short the EUR as there is “no risk” whatsoever in holding said currency, one would expect that this definition is absolutely spot on…

And as an added bonus, here is the part in which the ECB appears to be so worried about BitCoin taking over as legitimate “legal tender” from the EUR (which the ECB’s Coeure said two days ago is as “solid and longlasting as a diamond”) it dedicated an entire report to bash the recently conceived electronic currency:

Read moreHumor: The ECB Explains What A Ponzi Scheme Is; Awkward Silence Follows

– Is Draghi’s Bond-Buying Dream Circling The Drain As ECB/Bundesbank Lawyer Up? (ZeroHedge, Sep 24, 2012):

Following closely on the heels of our recent (now must read) discussion of the potential illegality of Draghi’s OMT, Reuters is reporting the somewhat stunning news that the ECB and Bundesbank are getting lawyers to check the legality of the new bond-buying program. Germany’s Bild newspaper – via the now ubiquitous unnamed sources – said in-house lawyers were checking both what proportions the program would have to take on and how long it would have to last for it to breach EU treaties (that specifically ban direct financing of state deficits).While Draghi – full of bravado – likely said whatever he felt was necessary at the time to stop the inversion in the Spanish yield curve, it is becoming clearer that, as usual, the premature euphoria (in the complacent belief that central banks can solve every problem with a wave of the magic CTRL-P wand) was misplaced.

Bild goes on to note that this matter could be referred to the European Court of Justice – and the ECB/Buba were preparing for such an event. Of course, since every other rumor in recent months, most of which have originated in credible media, has proven to be a lie, it is likely this is also merely leaked disinformation to push the German case, i.e. anti-Europe.

BERLIN, Sept 25 (Reuters) – The European  Central Bank and Germany’s Bundesbank central bank are getting lawyers  to check the legality of the ECB’s new bond-buying programme, a German  newspaper said on Tuesday.

German tabloid Bild, which did not name  its sources, said ECB and Bundesbank in-house lawyers were checking  both what proportions the programme would have to take on and how long  it would have to last for it to breach EU treaties.

OMT IS ILLEGAL AS IT VIOLATES ARTICLE 123 (1) OF THE TFEU, WHICH CLEARLY PROHIBITS THE ECB FROM ESTABLISHING A “CREDIT FACILITY … IN FAVOR OF NATIONAL GOVERNMENTS.”

According to Mario Draghi, OMT, or Outright Monetary Transactions, is a program of conditional bond buying targeted at specific countries to restore the perception of the euro’s irreversibility and stability, and repair a broken monetary policy transmission mechanism.  Once launched, OMT has no ex ante limits, it is within the ECB’s price stability mandate, and it can be halted or interrupted based on achievement of its objectives or non-compliance with conditions imposed upon the targeted national government.

I would posit that OMT is much more than what the party line states.  Here are some alternative interpretations for your consideration.  I challenge you to refute the logic of any of them.