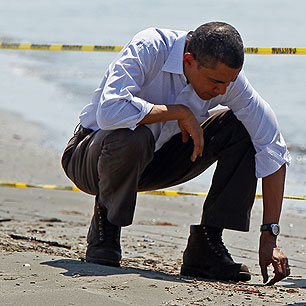 (Rolling Stone Magazine) — On May 27th, more than a month into the worst environmental disaster in U.S. history, Barack Obama strode to the podium in the East Room of the White House. For weeks, the administration had been insisting that BP alone was to blame for the catastrophic oil spill in the Gulf – and the ongoing failure to stop the massive leak. “They have the technical expertise to plug the hole,” White House spokesman Robert Gibbs had said only six days earlier. “It is their responsibility.” The president, Gibbs added, lacked the authority to play anything more than a supervisory role – a curious line of argument from an administration that has reserved the right to assassinate American citizens abroad and has nationalized much of the auto industry. “If BP is not accomplishing the task, can you just federalize it?” a reporter asked. “No,” Gibbs replied.

Now, however, the president was suddenly standing up to take command of the cleanup effort. “In case you were wondering who’s responsible,” Obama told the nation, “I take responsibility.” Sounding chastened, he acknowledged that his administration had failed to adequately reform the Minerals Management Service, the scandal-ridden federal agency that for years had essentially allowed the oil industry to self-regulate. “There wasn’t sufficient urgency,” the president said. “Absolutely I take responsibility for that.” He also admitted that he had been too credulous of the oil giants: “I was wrong in my belief that the oil companies had their act together when it came to worst-case scenarios.” He unveiled a presidential commission to investigate the disaster, discussed the resignation of the head of MMS, and extended a moratorium on new deepwater drilling. “The buck,” he reiterated the next day on the sullied Louisiana coastline, “stops with me.”

What didn’t stop was the gusher. Hours before the president’s press conference, an ominous plume of oil six miles wide and 22 miles long was discovered snaking its way toward Mobile Bay from BP’s wellhead next to the wreckage of its Deepwater Horizon rig. Admiral Thad Allen, the U.S. commander overseeing the cleanup, framed the spill explicitly as an invasion: “The enemy is coming ashore,” he said. Louisiana beaches were assaulted by blobs of oil that began to seep beneath the sand; acres of marshland at the “Bird’s Foot,” where the Mississippi meets the Gulf, were befouled by shit-brown crude – a death sentence for wetlands that serve as the cradle for much of the region’s vital marine life. By the time Obama spoke, it was increasingly evident that this was not merely an ecological disaster. It was the most devastating assault on American soil since 9/11.

Like the attacks by Al Qaeda, the disaster in the Gulf was preceded by ample warnings – yet the administration had ignored them. Instead of cracking down on MMS, as he had vowed to do even before taking office, Obama left in place many of the top officials who oversaw the agency’s culture of corruption. He permitted it to rubber-stamp dangerous drilling operations by BP – a firm with the worst safety record of any oil company – with virtually no environmental safeguards, using industry-friendly regulations drafted during the Bush years. He calibrated his response to the Gulf spill based on flawed and misleading estimates from BP – and then deployed his top aides to lowball the flow rate at a laughable 5,000 barrels a day, long after the best science made clear this catastrophe would eclipse the Exxon Valdez. 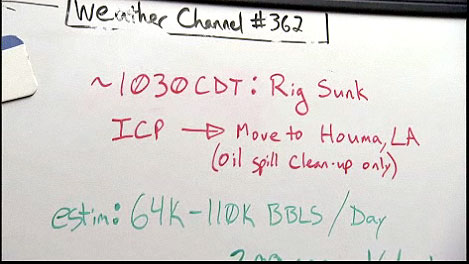 Hours after BP’s rig sank on April 22nd, a white board in NOAA’s “war room” in Seattle displays the administration’s initial, worst-case estimate of the spill — 64,000 to 110,000 barrels a day.

Even after the president’s press conference, Rolling Stone has learned, the administration knew the spill could be far worse than its “best estimate” acknowledged. That same day, the president’s Flow Rate Technical Group – a team of scientists charged with establishing the gusher’s output – announced a new estimate of 12,000 to 25,000 barrels, based on calculations from video of the plume. In fact, according to interviews with team members and scientists familiar with its work, that figure represents the plume group’s minimum estimate. The upper range was not included in their report because scientists analyzing the flow were unable to reach a consensus on how bad it could be. “The upper bound from the plume group, if it had come out, is very high,” says Timothy Crone, a marine geophysicist at Columbia University who has consulted with the government’s team. “That’s why they had resistance internally. We’re talking 100,000 barrels a day.”

The median figure for Crone’s independent calculations is 55,000 barrels a day – the equivalent of an Exxon Valdez every five days. “That’s what the plume team’s numbers show too,” Crone says. A source privy to internal discussions at one of the world’s top oil companies confirms that the industry privately agrees with such estimates. “The industry definitely believes the higher-end values,” the source says. “That’s accurate – if not more than that.” The reason, he adds, is that BP appears to have unleashed one of the 10 most productive wells in the Gulf. “BP screwed up a really big, big find,” the source says. “And if they can’t cap this, it’s not going to blow itself out anytime soon.”

Even worse, the “moratorium” on drilling announced by the president does little to prevent future disasters. The ban halts exploratory drilling at only 33 deepwater operations, shutting down less than one percent of the total wells in the Gulf. Interior Secretary Ken Salazar, the Cabinet-level official appointed by Obama to rein in the oil industry, boasts that “the moratorium is not a moratorium that will affect production” – which continues at 5,106 wells in the Gulf, including 591 in deep water.

Most troubling of all, the government has allowed BP to continue deep-sea production at its Atlantis rig – one of the world’s largest oil platforms. Capable of drawing 200,000 barrels a day from the seafloor, Atlantis is located only 150 miles off the coast of Louisiana, in waters nearly 2,000 feet deeper than BP drilled at Deepwater Horizon. According to congressional documents, the platform lacks required engineering certification for as much as 90 percent of its subsea components – a flaw that internal BP documents reveal could lead to “catastrophic” errors. In a May 19th letter to Salazar, 26 congressmen called for the rig to be shut down immediately. “We are very concerned,” they wrote, “that the tragedy at Deepwater Horizon could foreshadow an accident at BP Atlantis.”

The administration’s response to the looming threat? According to an e-mail to a congressional aide from a staff member at MMS, the agency has had “zero contact” with Atlantis about its safety risks since the Deepwater rig went down.

Read moreThe Spill, The Scandal and the President: The inside story of how Obama failed to crack down on the corruption of the Bush years – and let the world’s most dangerous oil company get away with murder