– VP Pence Confirms US Will No Longer Certify Iran Deal:

When McKenzie Deutsch posted a picture of herself posing with the Vice President of the United States at the White House she probably didn’t expect to set off a mass ‘triggering’ event at her ritzy Southern California private institution of higher indoctrination, Scripps College, but that’s exactly what happened.

According to the Daily Caller, Deutsch, a rising junior at Scripps, was an intern this summer in the office of U.S. Representative Cathy McMorris Rodgers (R-WA) and was excited by the opportunity to meet the Vice President.  So, after snapping the pic below she posted it to Facebook with the caption: “The places you’ll go, the things you’ll see, the people you’ll meet… What a day it was in DC!” 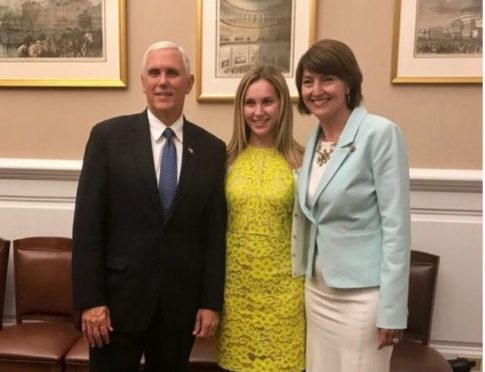 Of course, it wasn’t long before Deutsch was effectively tried and convicted of a hate crime by her peers at the ritzy, $70,000-per-year college.

– In Balkans speech, Trump’s VP pledges allegiance to the swamp

UPDATE: The escalation of the conflict with Russia has begun. US vice president Mike Pence made false allegations against Russia yesterday (Aug. 2) in Montenegro designed to panic Montenegrins into joining NATO. The two-decade march of NATO eastward despite Washington’s promise to the contrary, surely has taught Russia that no agreement with Washington can ever be trusted. So why does Russia continue to seek agreements with Washington?

Trump has always has been an elite puppet, just like Clinton, Bush and Obama.

President Trump has been defeated by the military/security complex and forced into continuing the orchestrated and dangerous tensions with Russia. Trump’s defeat has taught the Russians the lesson I have been trying to teach them for years, and that is that Russia is much more valuable to Washington as an enemy than as a friend.

Do we now conclude with Russia’s Prime Minister Dmitry Medvedev that Trump is washed up and “utterly powerless?”

Trump is by nature a leader. He wants to be out front, and that is where his personality will compel him to be. Having been prevented by the military/security complex, both US political parties, the presstitute media, the liberal-progressive-left, and Washington’s European vassals from being out front as a leader for peace, Trump will now be the leader for war.

Read moreDr. Paul Craig Roberts: Trump Will Now Become the War President – UPDATE: The Escalation of the Conflict With Russia Has Begun

US Vice President Mike Pence launched a verbal assault on Russia amid his visit to Montenegro on Wednesday, accusing Moscow of actions that could prevent the tiny Balkanese nation from joining NATO.

MOSCOW (Sputnik) — Pence accused Russia of trying to attack the Montenegrin parliament and attempting to assassinate the country’s prime minister to dissuade Podgorica from joining NATO.

“Russia continues to seek to redraw international borders by force, and here in the Western Balkans Russia has worked to destabilize the region, undermine your democracies and divide you from each other and from the rest of Europe. Russia’s intentions were laid bare over the past year when Moscow backed agents, sought to disrupt Montenegro’s elections, attack your parliament and even attempt to assassinate your prime minister to dissuade Montenegrin people from entering our NATO alliance,” Pence said in an address at the Adriatic Charter Summit in Montenegro.

“North Korea showing a variety of offensive missiles at yesterday’s military parade and daring to fire a ballistic missile today is a show of force that threatens the whole world.”…

– #Vault7: US will use ‘full force of law’ if WikiLeaks dump contains factual info, Pence warns

On Saturday morning Vice President Mike Pence did his best to return to conventional foreign policy after he vowed that the United States will “hold Russia accountable.” In an address to the Munich Security Conference, Pence assured European allies that the U.S. “strongly supports” NATO and will be “unwavering” in its commitment to trans-Atlantic institutions like NATO. 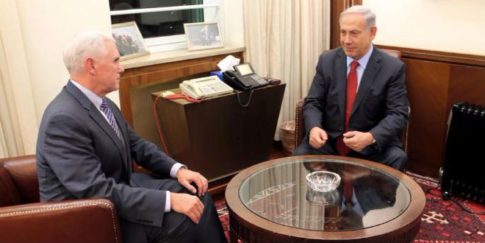