– Boehner Bashes GOP – Will Never Repeal & Replace Obamacare, “It’s Been Around Too Long”:

“…they’re never… going to repeal and replace Obamacare…It’s been around too long. And the American people have gotten accustomed to it… and quit tweeting… Never get into a pissing match with a skunk. He does it every day.“…

– Boehner: Full Repeal And Replace Of Obamacare “Is Not Going To Happen”

– FaReWeLL To THe WeeP…: 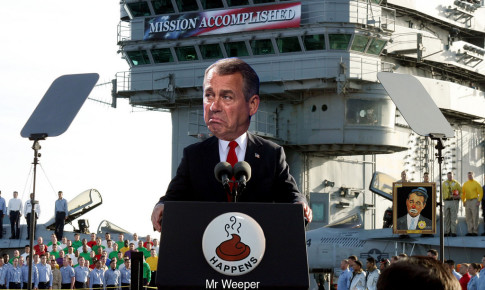 – The Back Story Behind John Boehner’s Forced Resignation

“Alas, just like the Obama administration is apparently unaware of this thing called “Google”, so Boehner and his staffers should familiarize themselves with the website OpenSecrets: it is there that the full establishmentarianism of every elected corporate puppet is laid out for all the peasants to see.”

Today’s WTF moment of the day comes courtesy of The Daily Signal, in which we read that while speaking at his first press conference since being narrowly reelected as House speaker after some 24 republicans defected, the Ohio Republican argued he is the “most anti-establishment speaker we’ve ever had.” We further learn that “Boehner couldn’t disagree more with conservatives who label him an “establishment” Republican and a “squish.”

This stunning revelation takes place 1:10 into the clip below.

Read moreWTF Moment Of The Day … John Boehner: “I’m The Most Anti-Establishment Speaker We’ve Ever Had” (Video)

Having folded (twice) once again, a growing number of Republicans are increasingly disavowed with Speaker Boehner. As WaPo reports, the Senate Conservatives Fund (a Tea Party group) is calling for the Speaker’s job, noting “unless we install a new leader who will actually go on offense, Democrats will never fear us and we will never have any leverage.” The group is launching a petition that seeks to encourage at least 15 House Republicans to refuse to support Boehner for speaker…

Despite the late Friday market optimism that the government shutdown, and more importantly debt ceiling impasse, may both be coming to an end as more republicans appeared ready to pass a “clean” continuing resolution, it was only fitting that a few hours after Bank of America said an “agreement is almost impossible as long as Obamacare is on the table“, that the House speaker Boehner, who appeared on ABC with George Stephanopolous’ This Week earlier today, escalated matters once again making any near term resolution virtually impossible.

That this happens on day 6 of the government shutdown (and with neither chamber of Congress set to meet until Monday evening, an eight day or longer shutdown is virtually inevitable) is bad. That this is happening with 11 days left until the debt ceiling X-Date is worse, especially since the republicans have made it clear they will now look to roll the debt ceiling negotiation into the government shutdown debate, both of which are driven fundamentally by the republicans’ opposition to Obamacare. Furthermore, with the halfway reopening of the government following the recall of furloughed Pentagon civilian employees, the government’s cash will run out that much faster.

Read moreJohn Boehner: We Are ‘On The Path To Default’, ‘It Is Time For Us To Stand And Fight’ (Video)

Just like that, we are back to square minus one, with the House again punting to the senate:

Boehner promptly took to Twitter to be social-network(ally) hip:

As reported earlier, the Senate will promptly squash said bill once again as it did with the defunding CR, in effect leaving essentially no time to cobble a deal together ahead of the the October 1 government shutdown.

Read moreBoehner: ‘House Votes To Keep Govt’ Running’; US Troops Will Be Paid During Government Shutdown

– The Fiscal Cliff Is A Diversion: The Derivatives Tsunami And The Dollar Bubble

The collapse of the Fiscal Cliff talks should come as no surprise to anyone (except, of course, for all those “expert” political commentators virtually all of whom saw a deal by December 31: a full list of names is forthcoming). The reason: a simple one – a House torn, polarized to a record extreme, and a political environment in which the two parties, in the aftermath of a presidential election humiliating to the GOP, reached unseen before antagonism toward each other. In this context, it was absolutely inevitable that America would see a replica of last summer’s debt ceiling collapse, which mandated a market intervention, in the form of a crash, and the wipeout of hundreds of billions in wealth – sadly the only catalyst that both parties and their electorate, understand. We had prefaced this explicitly in early November when we said that “the lame duck congress will posture, prance and pout. And it is a certainty that in the [time] remaining it will get nothing done. Which means, that once again, it will be up to the market, just like last August, just like October of 2008, to implode and to shock Congress into awakening and coming up with a compromise of sorts.” Which of course brought us to Thursday night’s mini-TARP moment.

If you missed Thursday’s ES flash crash, fear not: there will be more “TARP moments” as first the Fed is brought into action (as we reminded yesterday), and then, as the final deadline – that of the expiration of various debt ceiling extension gimmicks which takes place in March, and which is the real deadline for a deal. Nonetheless, there are those forensic detectives who are addicted to every single political twist and turn, and who are curious just where and when the Fiscal Cliff talks broke down in the past week. In this regard, the WSJ provides a useful timeline.

Mr. Obama repeatedly lost patience with the speaker as negotiations faltered. In an Oval Office meeting last week, he told Mr. Boehner that if the sides didn’t reach agreement, he would use his inaugural address and his State of the Union speech to tell the country the Republicans were at fault.

At one point, according to notes taken by a participant, Mr. Boehner told the president, “I put $800 billion [in tax revenue] on the table. What do I get for that?”

“You get nothing,” the president said. “I get that for free.”

Well, you can’t fault the man at not demonstrating “leadership” at crucial junctions: after all it’s only fair he gets something for free.

House Speaker John A. Boehner has offered to push any fight over the federal debt limit off for a year, a concession that would deprive Republicans of leverage in the budget battle but is breathing new life into stalled talks over the year-end “fiscal cliff.”The offer came Friday, according to people in both parties familiar with the talks, as part of the latest effort by Boehner (R-Ohio) to strike a deal with President Obama to replace more than $500 billion in painful deficit-reduction measures set to take effect in January.

With the national debt already bumping up against a $16.4 trillion cap set last year, Congress risks a government default unless it acts to raise the debt ceiling in the next few months. Some Republicans had argued that party leaders should use the threat of default to demand additional spending cuts from Obama.