For all the administration’s scaremongering about hackers hacking into every possible electronic source that is connected to the internet (and in the case of StuxNet, those that aren’t as Iran found out the hard way), it appears that the biggest culprit when it comes to lax communication security was the administration itself. And not just Hillary: moments ago NBC revealed that none other than former Secretary of Defense Chuck Hagel, who as a reminder resigned in November following intense scapegoating by Obama who needed to a sacrificial calf following the disastrous midterm elections, also used a personal, non-supervised email address. 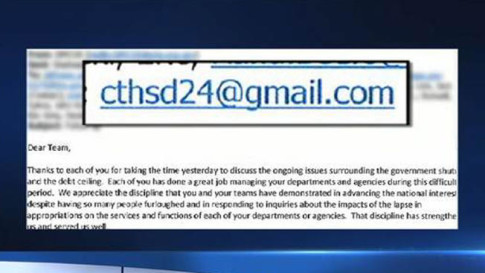 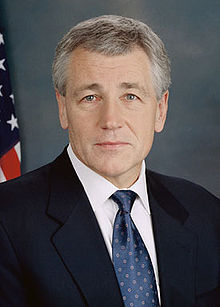 It seems lately that every war the United States gets itself into can’t just be another war, it has to be an open-ended clash of civilizations. Secretary of Defense Chuck Hagel set out that assessment fairly straightforwardly in his recent comments at the Washington Ideas Festival.

“We are living through one of these historic, defining times,” Hagel warned, “We are seeing a new world order – post World War II, post Soviet Union implosion.”

US Secretary of Defense Chuck Hagel talks about the “imminent threat” ISIS poses to the US and the World.. .and pulls no punches in his total fearmongery…“ISIL poses a threat greater than 9/11. ISIL is as sophisticated and well funded as any group we have seen. They’re beyond just a terrorist group. They marry ideology with a sophisticated strategic and tactical military prowess and they’re tremendously well-funded. This is way beyond anything we have seen. We must prepare for everything. Get Ready!“ Time for some QE-funded deficit-busting war spending…

US Secretary of Defense Chuck Hagel on Friday asked the Philippines for more access to the country’s military bases for another twenty years as the two sides discuss a wider American military footprint in Asia.

The request for increased military presence is part of President Barack Obama‘s strategic “pivot” to Asia, a policy that calls for a stronger US military alliances and more troop presence in the Asia-Pacific region.

The British government is the most enthusiastic country in the entire international community to get involved in Syria, and the decision on intervention has already been made, believes leader of UK Independence Party Nigel Farage.

The UK Parliament is to be recalled on Thursday to discuss possible responses to an alleged chemical weapons attack in Syria last week. The country’s Prime Minister David Cameron called on Tuesday for “specific” military action against the country, adding that so far no decision has been made on possible responses. He also pointed out that the UK is not considering getting involved in a Middle East war.

However, as Nigel Farage told RT, the government has already made its decision. The reported build-up of warplanes in Cyprus proves that, he added.

RT: UK parliament has been recalled to discuss the response to the alleged chemical weapons attack in Syria. But why now, why not wait until the UN investigators – who are on a fact-finding mission in the country – finish their job?

NF: From the very start it’s been the British Government, particularly William Hague and David Cameron, who throughout the entire international community, have been the keenest to get involved in Syria. You know, whether it’s arming the rebels or now, as we see today, the build-up of warplanes in Cyprus, preparations for cruise missile attacks. The British Government has been the keenest of anybody to intervene in Syria. So, that’s why they are not prepared to wait.

I also think that it’s unlikely that they will get a resolution passed through the United Nations Security Council.

WASHINGTON – Women may be able to start training as Army Rangers by mid-2015 and as Navy SEALs a year later under plans set to be announced by the Pentagon that would slowly bring women into thousands of combat jobs, including those in elite special operations forces.

Details of the plans were obtained by The Associated Press. They call for requiring women and men to meet the same physical and mental standards to qualify for certain infantry, armor, commando and other front-line positions across the Army, Navy, Air Force and Marines. Defense Secretary Chuck Hagel reviewed the plans and has ordered the services to move ahead.

JERUSALEM (AP) — U.S. Defense Secretary Chuck Hagel held out hope Sunday for a nonmilitary way to ending the threat of a nuclear-armed Iran, but he also emphasized Washington’s willingness to let Israel decide whether and when it might strike Tehran in self-defense.Hagel, on his first visit to Israel as Pentagon chief, seemed intent on burying the image that Republican critics painted of him as insufficiently supportive of the Jewish state. That portrayal was central to a failed campaign to derail Hagel’s Senate confirmation in February.

In an interview with reporters on his flight from Washington, Hagel said the United States and Israel see “exactly the same” threat from Iran, which he described as a toxic combination of nuclear ambition and support for terrorism.

WASHINGTON — Defense Secretary Chuck Hagel on Monday cancelled a new combat medal for US troops who launch drone strikes or cyber attacks after a torrent of criticism from veterans and lawmakers.

Hagel opted to scrap the new “Distinguished Warfare Medal” for a pin or device that could be added to existing medals to recognize service members operating unmanned aircraft or cyber weapons, Hagel said in a statement.

The now cancelled medal had provoked outrage among active duty and retired troops, who called it insulting due to its high ranking in the military’s hierarchy of traditional combat medals — above the prestigious Bronze Star for valor and the Purple Heart.

Americans have been shamed many times by their elected representatives who cravenly bow to vested interests and betray the American people. But no previous disgraceful behavior can match the public shame brought to Americans by the behavior of the Senate Republicans in the confirmation hearing of Senator Chuck Hagel as Secretary of Defense.