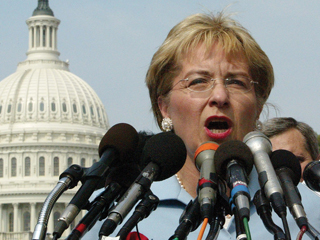 In Michael Moore’s new film Capitalism: A Love Story, Congresswoman Kaptur says there has been a financial coup d’etat, and that Wall Street – rather than Congress – is in charge.

Read moreCongresswoman Marcy Kaptur: There Has Been a Financial Coup D’Etat

The Obama administration “refused” to take meaningful steps to reform the banking system in the wake of last year’s financial crisis, and the opportunity to do so has now been missed, says a former chief economist for the International Monetary Fund.

Simon Johnson told PBS’s Bill Moyers that he expects an even larger financial crisis to hit the United States in the coming years because the system was not fixed through reform, but rather through a massive injection of taxpayers’ money into the failing banks.

“The short term opportunity was missed,” Johnson said on Bill Moyers Journal Friday night. “There was an opportunity the Obama administration had. President Obama campaigned on a message of change. … The time for change for the financial sector was absolutely upon us, this was abundantly apparent in January of this year.”

Johnson continued: “Rahm Emanuel, the president’s chief of staff, is known for saying ‘Never let a good crisis go to waste.’ The crisis for the big banks is substantially over. And it was completely wasted. The administration refused to break the power of the big banks when they had the opportunity earlier this year. And the regulatory reforms they are now pursuing … will turn out to be essentially meaningless.”

Johnson said that the bank bailout would not fix the long-term instability of the financial sector, and “when [the crisis] comes back, it will come back with a vengeance, and it will be I think even more devastating.”

The government’s policy towards the financial crisis amounts to “socialism for the big banks,” US House Rep. Marcy Kaptur (D-OH) told Moyers and Johnson. “They’ve basically taken their mistakes and they’ve put it on the taxpayer … that’s socialism, that’s not capitalism.”

Kaptur has become something of a crusader for homeowners’ rights in the wake of the housing crisis, as well as a major critic of US banks. Moyers played a clip of her giving a speech this past January in which she urged homeowners to ignore eviction notices and become “squatters in [their] own homes” if they need to.

So why should any American citizen be kicked out of their homes in this cold weather? … Don’t leave your home. Because you know what? When those companies say they have your mortgage, unless you have a lawyer that can put his or her finger on that mortgage, you don’t have that mortgage, and you are going to find they can’t find the paper up there on Wall Street. So I say to the American people, you be squatters in your own homes. Don’t you leave. In Ohio and Michigan and Indiana and Illinois and all these other places our people are being treated like chattel, and this Congress is stymied.

Kaptur recounted an anecdote about inviting representatives of investment bank JPMorganChase, the largest forecloser of homes in Kaptur’s Ohio district, to a meeting, and then waiting around all day as no one from JPMorganChase showed up — until nearly the end of the day.

“That’s how they treat our people,” Kaptur said.

My Tai Chi and Qi Gong teachers can also do the miraculous (‘Empty Force’ etc.).

They can also do it at a great distance. (In mind there is no distance. See also ‘nonlocality ‘in quantum physics.) It’s real.

‘You are where your consciousness is.’

This is not defying the ‘physical law’ if you include quantum physics!

We are emitting and receiving energy all of the time.

What we perceive as physical or solid is much more than 90% empty space.

And yet space – even a vacuum – is never empty.