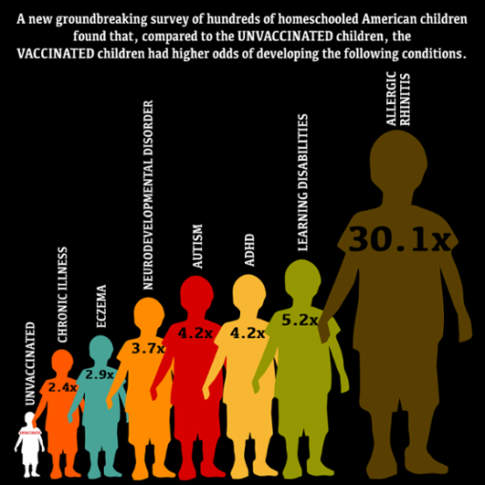 – Vaccinated vs. Unvaccinated: Guess who is Sicker?:

It’s never been done before. The first-of-its-kind study of vaccinated vs. unvaccinated American homeschooled children shows who is really ailing…and parents should be worried

Something is wrong with America’s children. They are sick – allergic, asthmatic, anxious, autoimmune, autistic, hyperactive, distracted and learning disabled. Thirty-two million American children – a full 43% of them – suffer from at least one of 20 chronic illnesses not including obesity. Across the board, once rare pediatric disorders from autism and ADD to Type 1 diabetes and Tourette’s syndrome are soaring, though few studies pool the data. Compared to their parents, children today are four times more likely to have a chronic illness. And while their grandparents might never have swallowed a pill as children, the current generation of kids is a pharmaceutical sales rep’s dream come true: More than one million American children under five years old takes a psychiatric drug. More than 8.3 million kids under 17 have consumed psychiatric drugs, and in any given month one in four is taking at least one prescription drug for something.

Read moreFirst Of Its Kind Study: Vaccinated vs. Unvaccinated Children: Guess Who Is Sicker?