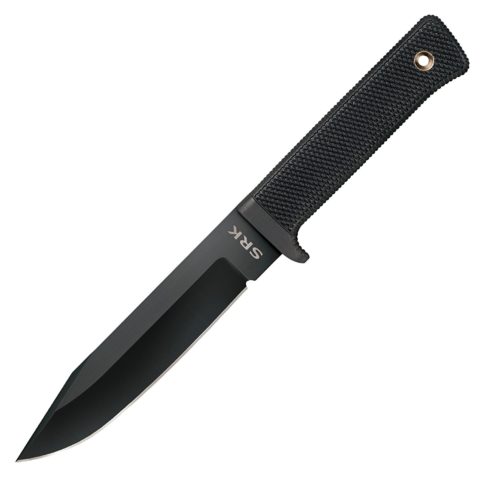 Survival & Rescue operations demand a versatile knife able to withstand the most extreme conditions. Simply put, the Cold Steel SRK (Survival Rescue Knife) was designed specifically with this in mind. A popular knife with Military and Tactical Law Enforcement Personnel, the SRK is the standard issue knife of the Navy SEALS for their BUDS – or Basic Underwater Demolition training – the SRK has proved its worth time and time again in the most demanding environments. Whatever the mission, we’re confident that the SRK is the knife for you!

Excellent survival knife, but if you want to use your knife only for hunting, then the Master Hunter is probably the best choice out there:

If this really is a 3V SRK, then this is a bargain (that is hard to believe, but then the Master Hunter also looks incredibly cheap. Am I missing something?):

Sadly, unlike the Gerber LMF II ($78.21), the 3V SRK is not equipped with a pointed buttcap that is made of stainless steel, but I still prefer the 3V SRK.

Also if you use the following links, then I.U. will get some commission from Amazon (no matter what you buy):