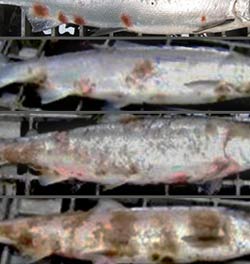 AP, Jul 27, 2015: More than a quarter million sockeye salmon returning from the ocean to spawn are either dead or dying in the Columbia… wiping out at least half of this year’s returning population… [NOAA’s Ritchie Graves] says up to 80 percent of the population could ultimately perish.

Washington Post, Jul 30, 2015: … Native American tribes are becoming increasingly worried [wild salmon] might disappear… the current threat is worse than anything they have seen… “We’re very worried,” said Kathryn Brigham, chair of the Columbia River Inter-Tribal Fish Commission… An estimated quarter-million salmon, more than half of the spring spawning run up the Columbia River, perished, likely killed by a disease that thrives in warm water and causes gill rot…  Adults stay in the Pacific Ocean from three to seven years… Some populations “could go extinct,” [Greg McMillan with Oregon’s Deschutes River Alliance] said.

KOIN transcript, Jul 27, 2015: Half of the sockeye salmon in the Columbia River are dying… Biologists are calling this die-off unprecedented… (Nick Blevins, fisherman:) “The fish are not looking in good condition… Some of them will have lesions… The sockeye already have gill diseases“… It could be the end for these endangered species. (Blevins:) “For something that’s been here longer than us that’s going to go to extinction, we’re not too far behind then.”

Spokesman Review, Jul 24, 2015: “Never in my entire (29-year) career have I seen anything like this,” [Jeff Korth, fisheries manager] said. “A minimum of 300,000 adult salmon have died… We’re seeing big gaping sores… 15,000 sockeye tried to go up the Okanogan last week… They all died… My goal was to retire before ocean conditions go to hell again.”

Seattle Times, Jul 27, 2015: … the Columbia [has turned] into a kill zone where salmon immune systems are weakened and fish die of infections… Some [are] suffering from a bacterial disease. Others have backs covered with a mottled white fungus. All are expected to die… Mary Peters, a microbiologist who works for the U.S. Fish and Wildlife Service [said] “It’s crazy.”… Salmon also face challenges in the ocean… “My guess is that this is going to be one of the poorest years for salmon (ocean) survival” said Bill Peterson, a [NOAA] scientist… “Things do not look good”… Diseased fish with red marks that are signs of a bacterial infection have been found… Some of them actually have red splotches all over…

Spokesman Review, Jul 17, 2015: “Catastrophic“ is a word that’s being used as scientists begin to unravel the mystery… [They’re] finding dead fish, both shad and sockeye… the words scientists use to describe what’s going on are freakier than the photos: