Greek PM Alexis Tsipras won a hard fought victory over party rivals on Thursday when Syriza’s central committee voted to postpone an emergency congress until after formal discussions on the country’s third bailout program are complete.

Syriza has been grappling with bitter infighting since more than 30 MPs in Tsipras’ parliamentary coalition defected during a vote on the first set of bailout prior actions, forcing the PM to rely on opposition votes to clear the way for formal discussions with creditors. The party dispute was exacerbated by reports that ex-Energy Minister and incorrigible Grexit proponent Panayiotis Lafazanis (along with several Left Platform co-conspirators) planned to storm the Greek mint and seize the country’s currency reserves.

Fed up, Tsipras told 200 members of Syriza’s central committee on Thursday that essentially, they could either hold a party referendum on the bailout on Sunday or wait until September to sort things out, leading us to note that “were Syriza to vote on whether or not Greece should follow through on the agreement with creditors, the market could be in for an event that is far more dramatic and important than the original referendum.”

Lafazanis refused to go along with the idea. “How many referenda are we going to hold? We’ve already done one and we won with 62 per cent of the vote”, he said. Ultimately, the party approved a September congress. This gives Tsipras some “breathing space,” FT notes, “but Thursday’s highly charged debate signalled that the Left Platform, which supports an end to austerity and a ‘Grexit’ from the euro, would continue to oppose a fresh bailout.”

And the party’s radical leftists aren’t alone in their opposition to the third program for Athens. On Thursday, FT reported that according to “strictly confidential” minutes from the IMF’s Wednesday board meeting, the Fund will not support the new bailout until the debt relief issue is decided and until it’s clear that Greece “has the institutional and political capacity to implement economic reforms.”

Somehow, all of this must be worked out in the next three weeks. Greece must make a €3.2 billion payment to the ECB on August 20 and if the bailout isn’t in place by then, it’s either tap the remainder of the funds in the EFSM (which would require still more discussions with the UK and other decidedly unwilling non-euro states) or risk losing ELA which would trigger the complete collapse of not only the Greek economy but the banking sector and then, in short order, the government. The question is whether Germany can be reasonably expected to take it on faith that i) the Greek political situation will not eventually result in Athens walking back its austerity promises, and ii) that the IMF will eventually hold up its end of the deal once Berlin approves some manner of debt re-profiling for the Greeks.

Now, according to Focus magazine, there are questions as to whether the timetable for cementing the bailout agreement is realistic. German lawmakers may now have to postpone a Bundestag vote and Athens has already discussed the possibility of taking a second bridge loan from the EFSM, Focus says. Here’s more (Google translated):

The timetable for the negotiations on a third aid package in favor of Greece is to look for an internal assessment of the federal government any more. According to the already contemplated for mid-August special session of the German Bundestag must be moved, according to government sources in Berlin.

The objective pursued by the EU Commission scheduling is too closely knit, criticize experts.This was reported in its latest issue of FOCUS.

Accordingly, the negotiations should be completed before August 10.On August 11, the euro zone finance ministers would approve the results before the agreement of other euro countries ratified and approved by the Parliament in Athens.Also, the Bundestag must still approve.

Due to delay Greece threatens a serious cash problem.The government in Athens must, at the latest on August 20, 3.2 billion euros, the European Central Bank to transfer (ECB), which should be possible without new loans from the third aid package barely.

Therefore already searched in circles of the EU Commission for ways to temporarily raise money from another pot. Speaking here a renewed bailout from the European Financial Stabilisation Mechanism is (EFSM)

This is difficult, however, because the EU states will again require an indemnity outside the euro-zone in this case. As early as September Greece must further loans operate: The International Monetary Fund (IMF) then expected repayments totaling € 1.56 billion in four tranches.In addition, running on 4 September from short-term government bonds in the amount of 1.4 billion euros, which Greece must also refinance.

And here’s the summary from Bloomberg:

German parliament meeting that was considered for mid-August might have to be postponed as European Commission’s schedule for aid talks is “much too tight,” Focus magazine reports, citing unidentified people in German govt.

Greece has to pay EU3.2b to the ECB by Aug. 20, which it may not be able to do without third aid package.

In other words, Greece will likely need yet another bridge loan from the EFSM and that will once again require the approval of non-euro countries that will, for the second time in a month, be asked to put their taxpayers at risk in order to keep the ill-fated EMU project alive and preserve the now thoroughly discredited notion that the currency union is “indissoluble.”

And make no mistake, Greece and its EMU “partners” had better hope things go smoothly after August because one more bridge loan and the EFSM is tapped out, which means Brussels will have to devise some other circular funding mechanism in the event the third program (which is itself nothing more than a dressed up ponzi scheme) isn’t in place by September.

Or, summarized in one picture: 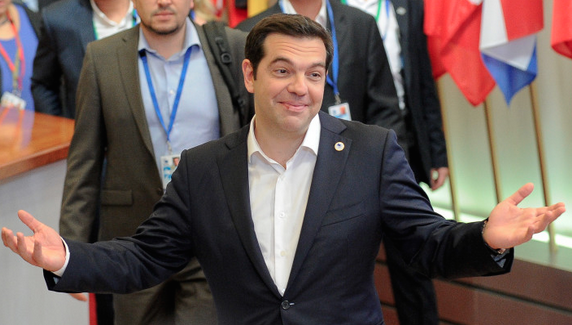