– U.S. Senators : We’ve Been Funding ISIS All The Time (Video)

Aaaand where is Putin???

Don’t look now but ISIS fighters are just a few short miles away from Bashar al-Assad’s Presidential Palace in Syria after taking control of the Yarmouk refugee camp in Damascus where some 18,000 are trapped in what the UN calls a “beyond inhumane” situation. The camp, which has been under siege by the Assad regime for years came under attack by ISIS earlier this month who reports indicate may be working alongside al-Qaeda’s Syrian arm al-Nusra in what would be a break with recent precedent. Some Palestinian factions — who, alongside the Free Syria Army are battling ISIS for control of the camp — have reportedly agreed to acquiesce to an operation by the Assad regime which has offered to provide arms to the Palestinians if it means helping them expel ISIS from the area, although, as the BBC reports, the main Palestinian militia fighting ISIS, Aknaf Beit al-Maqdis (who pledge allegiance to Hamas and are also battling al-Nusra in Yarmouk) have agreed to no such thing. Meanwhile, the Assad government is allegedly using “indiscriminate” barrel bombing in an effort that’s ostensibly designed to weaken ISIS forces.

So summing that up, ISIS, possibly in conjunction with al-Qaeda, have taken control of a strategic refugee camp in Damascus, which was previously under siege by Assad and previously controlled by Hamas-linked militiamen who are not keen on cooperating with Assad, who is offering to arm the Palestinians while simultaneously bombing everyone. As Al Jazeera notes, this is a “siege within a siege”:

For the last remaining Palestinian residents of Yarmouk outside Damascus, this week’s takeover by the Islamic State in Iraq and the Levant is a “siege within a siege.”

For almost two years, the regime of President Bashar al-Assad has been suffocating rebel-held Yarmouk, a Palestinian refugee settlement turned residential neighborhood just 10 minutes from the heart of Damascus.

Water has been cut off, available only when aid groups sneak it in, and medical supplies and food are scarce. Yarmouk, once known as the capital of the Palestinian diaspora, has shrunk from a prewar population of 180,000 to just 18,000, with about 200 people starving to death since the regime blockade began in 2013, the United Nations says.

The camp’s plight worsened on April 1, when ISIL fighters surged into Yarmouk from their nearby stronghold of Hajr al-Aswad and swiftly overpowered its Palestinian defenders, Aknaf Beit Al-Maqdis, a Hamas-aligned militia. As of Thursday, ISIL had taken over 70 percent of the camp, assisted, sources said, by elements of Jabhat Al-Nusra (the Nusra Front) — Al-Qaeda’s franchise in Syria and, normally, ISIL’s chief rival.

About 2,000 people managed to escape since ISIL infiltrated, but the rest “are now trapped in a siege within a siege,” said Salim Salamah, a Yarmouk native who left in 2012 and now heads the Palestinian League for Human Rights in Syria from Sweden.

Sources on the ground describe a terrifying scene. Farouq al-Rifai, an activist from Yarmouk who said he spoke from an “adjacent neighborhood” but is in contact with many in the camp, said that pitched street battles have broken out and that sniper fire from roofs has killed fighters and civilians alike. The last remaining relief workers in the camp have been forced to flee after several were killed and others were kidnapped by ISIL.

Meanwhile, regime warplanes add to the chaos by dropping barrel bombs “all over the camp — north, south, east and west,” Salamah said. People are running out of food, but “they can’t leave their houses to find it because they don’t know where clashes on the ground will take place.”

Though the situation on the ground is murky, with conflicting reports that Palestinian factions in the camp have conspired with the invasion, the broad consensus is that Yarmouk has fallen casualty to a turf war between ISIL and an array of disjointed rebel factions active in the area.

BBC has more on the “coalition” between the Assad regime and Yarmouk’s Palestinian factions:

It is unclear whether all Palestinian factions in the camp have agreed to Syrian government intervention.

Anti-government Palestinian militiamen and some Free Syrian Army fighters have been leading the fight against IS.

“The operation will be conducted in cooperation between the Palestinian groups in Syria and the Syrian government through a joint operation centre,” Palestine Liberation Organisation (PLO) official Ahmed Majdalani – who is heading a Palestinian delegation in Damascus – told the BBC.

Who exactly will do what in the operation, and how the plan will work, is far from clear, the BBC’s Jim Muir reports from Beirut.

The Aknaf, the main Palestinian force fighting the militants, was not involved in the agreement – it has been cooperating with Syrian rebels battling both government forces and Islamic State, our correspondent reports.

In the midst of it all, ISIS is doing what ISIS does: executing prisoners and posing Twitter pictures in various places around their newly-captured territory. Here’s The Independent:

Reports emerged yesterday of Isis militants beheading captives after taking over a large proportion of the camp. Mr Abdurrahman said two men were beheaded after the clashes broke out on Wednesday and five others were shot dead by militants.

He said the beheaded men appeared to have been aged between 25 and 35, but he did not know the ages of the other men. These reports could not be independently confirmed.

#Syria: #IS#Damascus Province has released photos of its fighters posing in various locations in #Yarmouk. pic.twitter.com/eytPDsbUBz

Needless to say, this represents an absolutely horrific situation for the nearly 20,000 civilians that are trapped in the warzone, stuck between ISIS, al-Qaeda, Hamas, and Assad who are all, in one way or another fighting each other. Perhaps UN Secretary-General Ban Ki-moon put it best when called the camp “the deepest circle of hell.” 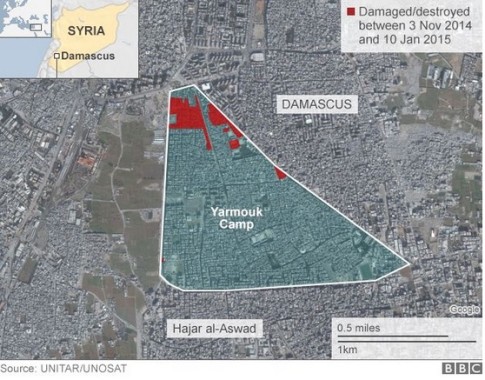 The world is also now waking up to the very real possibility that ISIS may move to topple the Assad regime and take control of Damascus, which we imagine would, in short order, be paraded out as the reason why a Syrian invasion has moved from the realm of the “possible,” to the “probable,” to the “necessary” and if there’s anything that would rally public support around such a move it’s the notion that the group which has been portrayed in the media as the greatest threat to human decency since the Third Reich has now gone from controlling a state they made up to an actual state which borders other, Western-friendly actual states in the region. And once the black flag-waving bogeymen (who at that juncture may begin to realize that they were nothing more than an unfortunate side-effect of failed foreign policy and had been shuffled around like pawns on a chessboard only to be promptly removed from the game once they served their purpose) are driven from the capital by some farce of a “coalition,” they’ll be replaced with someone more sensible who will likely be far less Putin-friendly than his predecessor and who will undoubtedly understand the utility of piping Qatari natural gas underneath his country all the way to end customers in Europe and it will be at exactly that point that we will say again that “conspiracy theory” has become “conspiracy fact,” right down to the last detail.