“To take our minds off Fukushima, the Economy & WWlll, here’s another….”

Screenshot below from Google Earth shows Mount Hood in the foreground, and the multiple other large volcanic peaks located due North.

Just across the border from Oregon’s Mt. Hood, resides the much more famous Mount St. Helens. 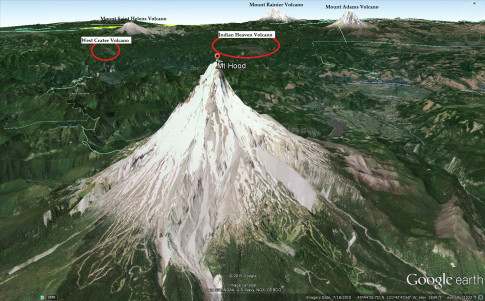 As seen in the above screenshot, Mount St. Helens, Mount Rainier, and Mount Adams, as well as West Crater, and Indian Heaven all are within a very short distance from Mount Hood.

In the past (during the May 1980 eruption of Mt. Saint Helen’s), we saw that these eruptions can be explosive beyond measure.  If there is even the slightest hint that this volcano, or any other Stratovolcano in the area is rising + showing gas activity, then we need to be on watch.

Caution is needed in light of other global activity happening at volcanic areas.

Media report on this new equipment being installed here:

“Mount Hood signals that it is an active volcano”

“Volcanic detection equipment proposed for the summit of Mount Hood would put geologists as close as they’ve ever been to the heartbeat of an active volcano.

The U.S. Geological Survey and the Cascades Volcano Observatory hope to install four volcano monitoring stations on the upper flanks of Mount Hood.

“This is going to help us detect the reawakening of a volcano prior to an eruption so that we don’t have to go in and play catch up,” Benjamin Pauk with USGS told KOIN 6 News. “The fear is we won’t be able to get equipment in there until it’s too late.”

Scientists say that although it’s not erupting, Mount Hood signals that it is an active volcano. Oregon’s signature peak produces frequent earthquakes, and steam and volcanic gases are emitted in the area around Crater Rock near the summit.

The proposed stations would enhance scientists’ ability to detect subtle signals beneath the volcano and help determine whether it poses any threat of imminent eruption.

In a 2005 national volcano early warning assessment, the USGS designated Mount Hood as a “very high threat” volcano, due to its history of eruptions, current activity and closeness to downstream communities. The mountain is about 50 miles east of Portland.

Molten rock miles beneath the mountain hasn’t boiled toward the surface in more than 200 years — but frequent earthquakes under the mountain and steam at the summit remind geologists the dormant phase won’t last forever.

The stations would be in a wilderness area, away from trails. The Mount Hood National Forest is accepting comments on the proposal through April 27.”

The equipment is designed to measure gas which reaches the surface of the volcano from magma deep below.  If more gas is released, this could be a sign of magma movement in the chamber below the volcano.

The presence of excess gas could be a sign of a coming eruption.

Are these monitoring stations being installed because of building pressure on the West coast?  Are the professionals just being cautious, and being prepared?   Is the USGS just being proactive?!

Regardless of the motivation behind this need for new monitoring equipment – we already know several dormant volcanoes, and active volcanoes have erupted, or shown earthquake activity recently with NO warning at all.

Why does a rise matter?  When a rise is associated with volcanism, and when the rise happens over a very large area, then you know an eruption is primed to occur.

As we saw over in Iceland… as Bardarbunga Volcano was erupting, the island showed a total overall rise of up to 1.4 inches in just a few months time!