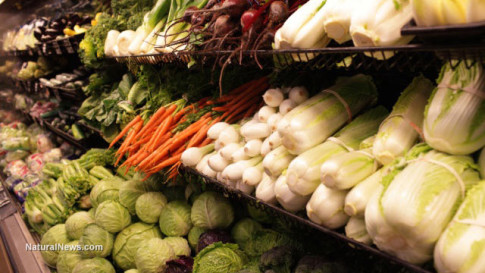 – America to lose one-third of its fresh produce when California runs out of water (Natural News, March 16, 2015):

As Michael Snyder points out in a timely article at The Economic Collapse Blog, California is rapidly reverting back to the desert it was once.

Awareness of this is only now beginning to spread, but almost no one truly grasps the implications of what losing California’s Central Valley agricultural output means to grocery shoppers.

Almost no one realizes, for example, that one-third of all the produce grown in the United States comes out of California’s Central Valley. As the NYT explains:

Unlike the Midwest, which concentrates (devastatingly) on corn and soybeans, more than 230 crops are grown in the valley… melons, lettuce, asparagus, cabbage, broccoli, chard, collards, prickly pears, almonds, pistachios, grapes and more tomatoes than anyone could conceive of in one place. (The valley is the largest supplier of canned tomatoes in the world too.)

That same article also mentions that 85% of the carrots consumed by Americans are grown in the valley. As Michael Snyder mentions in this article, California also produces:

Losing the ability to produce crops in the Central Valley means food prices will skyrocket across America: a pound of organic strawberries might cost $25, a single avocado might run you $10, and a head of organic romaine lettuce might set you back $12 or more.

Of course, you can grow your own Romaine lettuce for about 10 cents a head using the Food Rising Mini-Farm Grow Box, and you can even learn how to make your own with common tools. The more scarce food becomes, the more expensive it gets. That’s all the more reason to learn how to grow your own, because growing your own food is not only dirt cheap; it’s incredibly easy now thanks to the Food Rising system.

A loss of one-third of the ability to domestically produce fresh produce is not merely a food inflation nightmare; it’s also a food security crisis. It would require the importing of more food from places where agricultural chemicals can be readily used even if they’ve been banned in America.

It’s perfectly legal for a food grower south of the border to use a toxic chemical pesticide or herbicide that’s been banned in the United States. Because the FDA rarely tests imported foods for banned agricultural chemicals, it is extremely unlikely that such foods would be barred from importation. While California enforces relatively strict agricultural guidelines and produces relatively clean food, as its water supply collapses, we’ll all be forced to deal with more chemically contaminated foods brought in from other countries. (This is yet another reason to learn how to grow your own.)

A collapse of food production potential in California will also cause a huge crisis in the agricultural labor market. Hundreds of thousands of agricultural workers keep California’s farms humming along, but if those workers suddenly find there’s no work (because of the water supply collapse), they will either migrate to other areas where work is available or turn to the State of California for financial support. This would place an enormous additional financial burden on the state at exactly the same time its agricultural exports are plummeting.

The big trend: A wave of home food growers

No matter how it plays out in California, fresh produce is about to get a whole lot more expensive across America. Because of this, interest in home food production is set to explode.

The economics just make sense: Even if fresh produce doubles in price at the grocery store, your cost to produce the same fresh produce at home doesn’t go up at all. If you have water, sunshine and seeds, you can grow an enormous variety of fruits, vegetables and medicines using simple, self-watering systems like the Non-Circulating Hydroponics system unveiled at www.FoodRising.org .

In fact, one of the big trends I see that’s about to explode across America is commercial hydroponic food production using LED grow lights and indoor grow environments. The economics of such operations make sense right now, and they’ll be even more profitable in the near future as conventional food production falters due to drought and weather radicalization.

Remember: Cheap water results in low-cost food. But when the cheap water runs out, the food becomes more expensive, creating opportunities for more high-cost food production systems to compete in the marketplace.

Finally, also remember this: The price you paid for food at the grocery store YESTERDAY is the lowest price you will likely ever see.