Since 2010, The Bank of Japan has ‘openly’ – no conspiracy theory here – been a buyer of Japanese stock ETFs. Their bravado increased as the years passed and Abe pressured them from their independence to ‘show’ that his policies were working to the point that in September 2014, The BoJ bought a record amount of Japanese stock ETFs taking its holdings to over 1.5% of the entire market cap, surpassing Nippon Life as the largest individual holder of Japanese stocks. However, as WSJ reports,The BoJ has now gone full intervention-tard – buying Japanese stocks on 76% of the days when the market opened lower.

The Bank of Japan’s aggressive purchasing of stock funds has helped Japanese shares climb to multiyear highs in recent months. But some within the central bank are growing uncomfortable about the fast-paced rally and the bank’s own role in fueling it.

Since Gov. Haruhiko Kuroda took office in March 2013 and introduced monetary easing of what he called a “different dimension,” the central bank has sharply increased its buying of baskets of stocks known as exchange-traded funds. By directly underpinning the market, officials have tried to encourage private investors to follow suit and put more money in stocks in the hope of stimulating the economy and increasing inflation.

During the past two years, the central bank entered the stock market roughly once every three days, picking up a total of ¥2.8 trillion ($23 billion) of ETFs that track Japan’s major stock indexes, according to Bank of Japan records. That distinguishes it from the U.S. Federal Reserve and European Central Bank, both of which have bought bonds to pump up the economy but haven’t directly bought stocks. 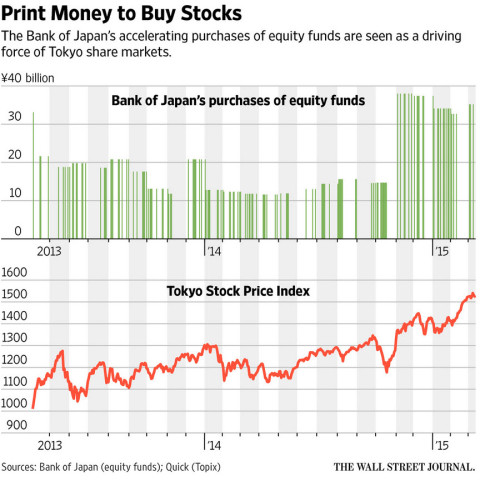 Analysts say the bank’s action has been a significant driver of Japan’s stock-market rally in recent months, combined with hefty purchases by the $1.1 trillion Government Pension Investment Fund. Their buying has often countered selling pressure from individuals in the market and made up for a weaker appetite among foreign investors.

The central bank has stepped in mostly when market sentiment was weak. Three-quarters of the central bank’s buying occurred on days when the benchmark Topix index opened lower, according to a Wall Street Journal analysis of BOJ data. 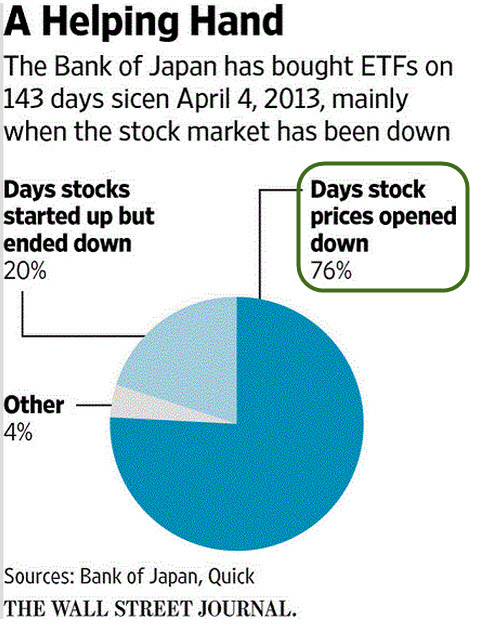 So much for independence…

BOJ officials used to be cautious about purchasing ETFs, worried that it could distort market activities and put the central bank’s own financial health at risk. But under pressure from politicians following the global financial crisis, the bank changed its stance in late 2010.

“We led the cows to water, but they didn’t drink it, even though we told them it tasted good,” Miyako Suda, who was a board member then, wrote in a 2014 book discussing monetary easing at that time. “So we thought we should drink it ourselves, showing them it was tasty.”