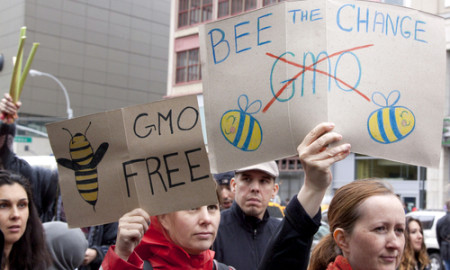 Concerned about the bees and the butterflies? Interested in celebrating National Pollinator Week? It’s happening next week, June 16-22.

And it’s brought to you, in part, by none other than Monsanto and Bayer.

Who supports (i.e. funds) the Pollinator Partnership? Among others, Bayer and Monsanto—the very companies that are killing pollinators with insecticides and genetically engineered crops.

It’s all part of a well-documented, well-funded (and shameless) public relations campaign by the pesticide industry to give the appearance of “caring” about the die-off of bees and butterflies, while diverting attention from the cause of those die-offs—highly profitable products made by Monsanto and Bayer.

In honor of Pollinator Week, share this article. And make plans to join a pollinators celebration that hasn’t been taken over by the agrichemical and biotech companies: Bee Against Monsanto’s Global Swarm to Save the Bees on Aug. 16.

Three ways Monsanto and Bayer are killing the bees:

In 2000, scientists discovered that genetically engineered traits in pollen can be transferred to bees though their digestive systems.

Researcher Hans-Hinrich Kaatz, a leading German zoologist, released bees in a field of canola that had been genetically engineered to tolerate Monsanto’s Roundup herbicide. He then fed the canola pollen to younger bees and observed that the bacteria in the guts of the young bees took on the traits of the canola’s modified genes.

Kaatz’s research predated Colony Collapse Disorder. That term, for the disappearance of bees from the hive, wasn’t coined by scientists until 2006.

With the mass death of bees yet to come, the discussion of Kaatz’s findings focused less on how Monsanto’s genetically engineered herbicide-tolerant “Roundup Ready” crops could harm bees, and more on his research’s suggestion that all types of bacteria could be contaminated by engineered genes, including those that live inside the human digestive system. Scientists warned that this would impact the bacteria’s vital role in helping the human body fight disease and aid digestion. Even worse, if the antibiotic-resistant gene used in genetically engineered crops crossed over to bacteria, it would cause human infections to become resistant to antibiotics.

The warnings were prescient. Kaatz’s work foreshadowed the correlation between the increase of Monsanto’s Roundup Ready crops in the human diet, and the rise of gastrointestinal disorders, immune diseases and antibiotic resistant infections.

Inadvertently, he also predicted how the increased use of Monsanto’s Roundup Ready crops would spur Colony Collapse Disorder in bees.

When Colony Collapse Disorder hit in 2006, others picked up where Kaatz left off.

In 2010, Terrence N. Ingram, a commercial beekeeper for 55 years, published an article in 2010 in Mother Earth News that detailed the struggles he’d had since his neighbors started spraying Roundup on their genetically engineered herbicide-tolerant soy in 1996. He went from producing 15 tons of honey a year down to four.

“The bees never had a chance,” he wrote, “and all of the hives were dead before winter.”

In 2012, his bees disappeared while he was out of town. This time it wasn’t the neighbor’s herbicide sprays, it was the Illinois Department of Agriculture (IDA). Under the pretense that Ingram’s hives were infected with foulbrood, the agency destroyed them to prevent the spread of the disease.

Ingram believed IDA’s action had more to do with his 15 years of research into the effect of Roundup on honeybees. His suspicions were fueled by the fact that IDA’s theft included the hive of a queen bee that may have had a genetic resistance to Roundup.

“Knowing that Monsanto and the Department of Agriculture are in bed together, one has to wonder if Monsanto was behind the theft to ruin my research that may prove Roundup was, and is, killing honeybees,” Ingram told local Prairie Advocate reporter Tom Kocal.

Ingram hasn’t been able to get his bees back. But his hunch that Roundup was killing his bees is gathering support.

The suspicions voiced in Ingram’s 2010 Mother Earth News article were backed up with scientific evidence in 2013, when plant pathologist Dr. Don Huber published a paper written for the Center for Honeybee Research that names glyphosate, the main ingredient in Monsanto’s Roundup, as a possible cause of Colony Collapse Disorder.

According to Huber, “The exposure, physiological damage, and biological impact of glyphosate are consistent with all of the known conditions related to CCD. Of all of the potential individual factors implicated in CCD, glyphosate is the only compound extensively used worldwide where CCD occurs that impacts all of them.”

But as it turned out, not all the bees in his study were healthy. Just by chance, some of the bees were simultaneously exposed to a parasite along with the engineered toxin. In that group, there was a “significantly stronger decline in the number of bees.” According to Kaatz, the bacterial toxin in the genetically modified corn may have “altered the surface of the bee’s intestines, sufficiently weakening the bees to allow the parasites to gain entry.”

Because of the harmful effect that the pollen of Bt crops could have on bees, in 2012, Poland’s Agriculture Minister Marek Sawicki imposed a complete ban on growing MON810 corn, a Bt crop that is the only genetically engineered crop grown in the EU.

Looking at the science, it’s hard not to wonder if Monsanto isn’t killing bees intentionally. Especially when the company buys out a bee research firm and proposes use genetic engineering to address Colony Collapse Disorder.

Insecticides known as neonicotinoids, or “neonics” for short, are the smoking gun of Colony Collapse Disorder. Bee colonies began disappearing in the U.S. one year after the U.S. Environmental Protection Agency allowed these new insecticides on the market in 2004-2005.

A pile of studies implicate neonics in bee die-offs. Neonics are nerve poisons that disorient bees so they can’t make it back to the hive. They also trigger immune system failure, causing the bees to fall prey to opportunistic infections. Last year, the EU imposed a two-year ban on all neonics.

Monsanto routinely treats its seeds with neonics. Unlike insecticide sprays, neonic seed treatments cause the insecticide to spread through every cell of the plant as it grows. The insecticide is present and active in the plant’s pollen and nectar.

Take something that’s toxic to bees, get it to grow in plants’ pollen and nectar, and you’ve got a bee-killing machine.

Monsanto has a partner in this crime. It’s Bayer, the main manufacturer of neonic insecticides, as well as Syngenta, who together with Bayer controls the neonic market. They’re partners in Pollinator.org, part of their massive public relations disinformation campaign to distract the public and policymakers from thinking that pesticides might have something to do with bee death and destruction.

We can’t let these companies control what the American public knows about Colony Collapse Disorder. Celebrate National Pollinator Week by exposing their crime and the cover-up. Share this article and make plans to join the Global Swarm to Save the Bees on Aug. 16.

– Canada: Bees Dying By The Millions