Every time a TBTF bank releases its 10-Q, we head straight for the section, usually well over 100 pages in, that discloses the bank’s total profitable trading days.

This is what the most recent Bank of America 10-Q said on this topic: 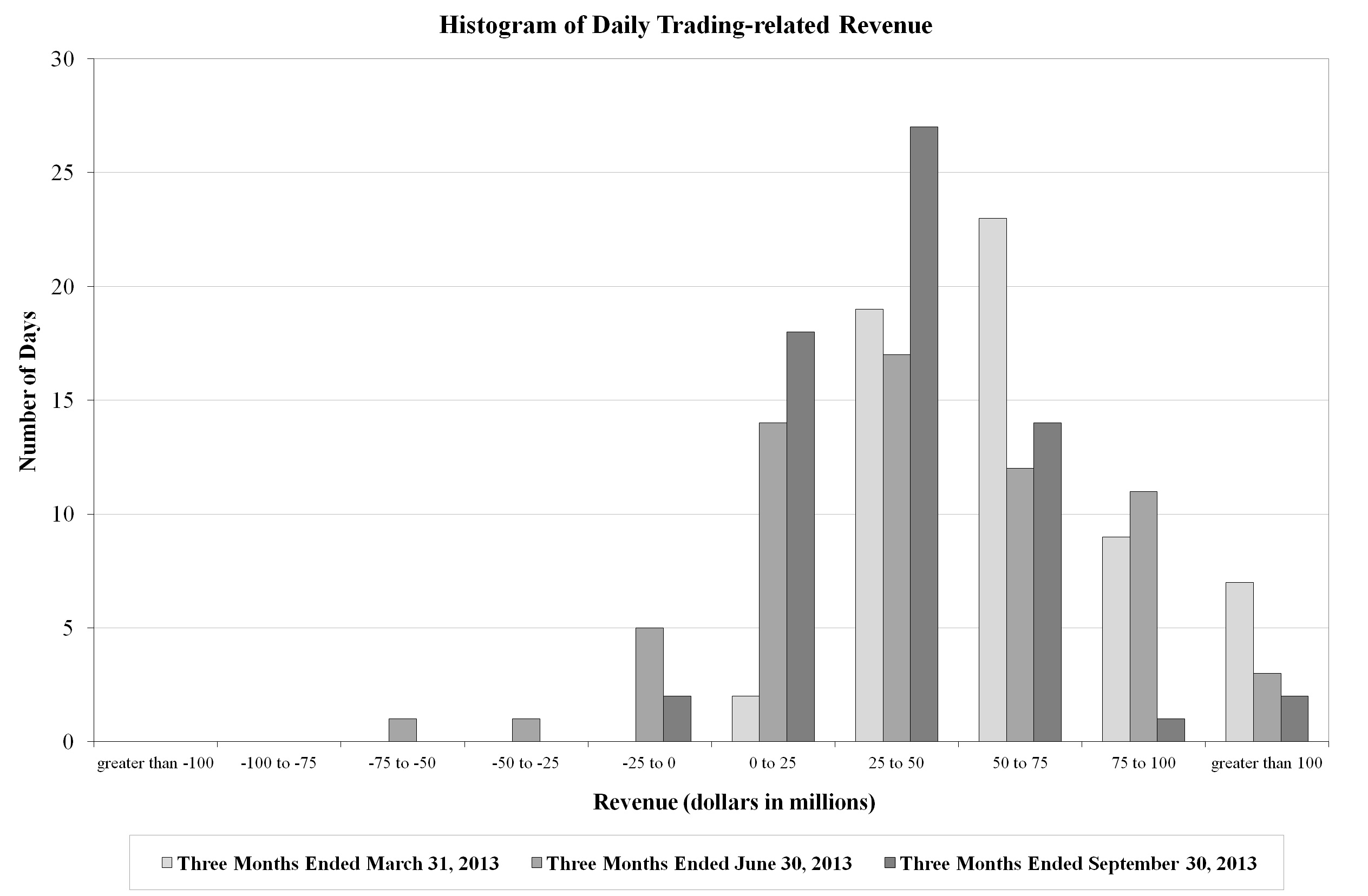 Statistically, this result is absolutely ridiculous when one considers that the bulk of bank trading revenues are still in the form of prop positions disguised as “flow” trading to evade Volcker which means the only way a bank could make money with near uniform perfection is if it either i) consistently has inside information that it trades on or ii) it consistently front-runs its clients.

In related news, the only more absurd datapoint was JPMorgan’s announcement of how many trading day losses it had in the first nine months of 2013. For those who missed out succinct post on the matter, the answer was clear: zero. The absurdity becomes even clearer when one considers that in the pre-New Normal days, JPM had an almost normal profit/loss distribution in its trading days.

But back to Bank of America, where as we noted, the kind of trading result would only be possible if the bank was aggressively insider trading or just as aggressively frontrunning flow orders in its prop book (a topic we covered back in 2009 as relates to Goldman Sachs, and which the bank sternly rejected).

We now know that at least one of the two almost certainly happened after Reuters report from earlier today that it discovered on the FINRA BrokerCheck page of one of the bank’s former Managing Directors, Eric Beckwith, the following curious ongoing investigation:

WE UNDERSTAND THAT THE USAO (US Attorney Office) -WDNC IS INVESTIGATING WHETHER IT WAS PROPER FOR THE SWAPS DESK TO EXECUTE FUTURES TRADES PRIOR TO THE DESK’S EXECUTION OF BLOCK FUTURE TRADES ON BEHALF OF COUNTERPARTIES, AND WHETHER MR. BECKWITH PROVIDED ACCURATE INFORMATION TO THE CME IN CONNECTION WITH THE CME’S INVESTIGATION OF THE SWAPS DESK’S BLOCK FUTURES TRADING. WE ALSO UNDERSTAND THAT THE COMMODITY FUTURES TRADING COMMISSION IS CONDUCTING A PARALLEL INVESTIGATION INTO THE TRADING ISSUE.

The U.S. Department of Justice and the Commodity Futures Trading Commission have both held investigations into whether Bank of America engaged in improper trading by doing its own futures trades ahead of executing large orders for clients, according to a regulatory filing.

The June 2013 disclosure, which Reuters recently reviewed on a website run by the securities industry regulator FINRA, sheds light on the basis for a warning by the Federal Bureau of Investigation on January 8.

The warning, in the form of an intelligence bulletin to regulators and security officers at financial services firms, said that the FBI suspected swaps traders at an unnamed U.S. bank and an unnamed Canadian bank may have been involved in market manipulation and front running of orders from U.S. government-owned mortgage giants Fannie Mae and Freddie Mac.

Only this time it’s different, because a quick check on the background of Beckwith shows that his expertise is not trading MBS but a different product entirely.

First, it goes without saying that Eric would promptly scrap his LinkedIn Profile as the following URL shows.

What is this newly promoted product, and why is there demand for it? This is what the CME had to say about the benefits of “DIRPs” (even though the technical acronyms is DSFs):

But, as in the case of CDS, and all other novel products, the main reason for DIRPs is simple: an even lower margin requirement compared to Interest Rate Swaps and Treasury Futures (margined together), allowing one to express a position, or better, manipulate the market in Interest Rate products, using the least amount of margin (initial capital) possible.

The following chart explains just this: 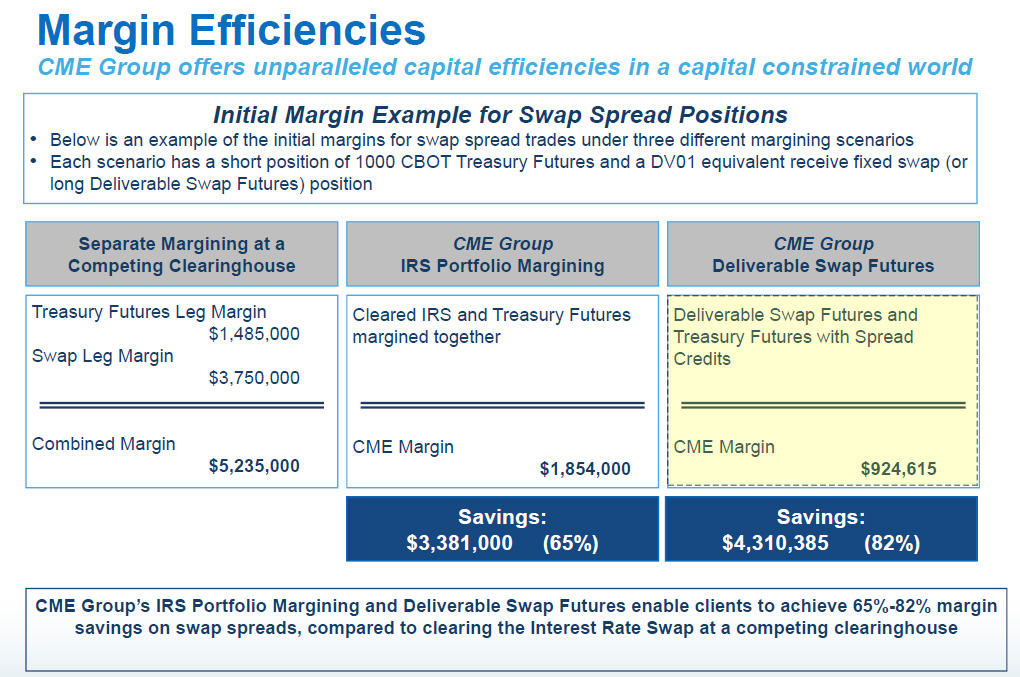 Bottom line: if you want to manipulate Treasurys in a reflexive market, where the derivatve almost always drives the price of the underlying (as perhaps explained best by none other than the then-member of the Fed Dino Kos), this is the best product as you get even more firepower for your buck.

Only in this case, anyone trading with the Bank of America DIRPs desk was apparently also being frontrun on a consistent basis.

We are relatively comfortable with alleging that BofA did indeed allow this to happen (whether it neither admits nor denies guilt at the end of the day), because a few weeks after the notice appears in Beckwith’s Brokercheck profile on June 14,2013, he promptly “left” Bank of America in July as Reuters reports: not exactly the course of action an innocent man would take.

In other words, while Reuters is focused on the Fannie and Freddie frontrunning angle, it appears the frontrunning activity spread substantially to involve the entire Treasury curve as well!

So while HFTs frontrun all equity retail trades in open markets, major banks frontrun all institutional block equity orders in their own dark pools, we find out that bankers also just happen to frontrun clients in “you name it” over the counter product, where the only reason to be involved is to take advantage of the low margin – something JPM’s CIO did quite aggressively and quite well until it blew up of course.

But the best news: we finally know how it is possible that every bank reports quarter after quarter of near uniform trading perfection and close to zero trading day losses.