Here’s what happens to foreign leaders who could not be bought with $200 million:

During 2013, Venezuela experienced one of the most difficult times in its history with the death of President Hugo Chavez on March 5. Chavez, a major leader whose policies transformed the country, was the victim of an aggressive cancer that killed him in less than two years. The charismatic Venezuelan president faced large and powerful enemies during his 14 years in power ever democratically elected majorities and strong. Coups, economic sabotage, electoral interventions, psychological warfare, U.S. billionaire from his opponents and attempts on his life funding agencies were some of the tactics and strategies of destabilization that Chavez had to fight during his tenure.

He headed the lists of the Central Intelligence Agency (CIA) and the Pentagon as the main target of their attacks, and the United States significantly expanded its military presence open and clandestine-around Venezuela during his administration. So his sudden and unexpected death caused much suspicion among his followers and those scholars of his socio-political vision. Chavez defied the most powerful interests in the world, and in turn, controlled the largest oil reserves on the planet. Could it have been a political assassination Chavez’s death?

Maybe a few years ago that question would have caused laughter in a majority of readers.However, today, with the vast amount of information that has come to light as whistleblower WikiLeaks and excontratista National Security Agency United States (NSA) Edward Snowden on grave violations of human rights and sovereignty committed by the U.S. government, questions like that not only do the ‘conspiracy theorists’ and connoisseurs of dirty Washington politics. Today the world knows how the U.S. government spy on their friends, allies, enemies and citizens: no one is safe from the eyes and ears of Washington. Today it is known that almost all U.S. embassies worldwide are centers of espionage and intelligence operations, violating all international norms and rules regardless of the consequences. Serious human rights abuses committed by U.S. forces in Iraq and Afghanistan are known, and how the Obama administration expanded the use of drone-o’-drones’ to murder innocent people via remote control.

Today the Government of the first African-American known how the Presidency pursued with fury to tell truths about the abuses of Washington, and even more so when are U.S. citizens and Bradley (Chelsea) Manning, Edward Snowden and Jeremy Hammond. It is known that Washington used its economic power to try to neutralize WikiLeaks and freeze their finances, blocking access to Visa, Mastercard and Paypal only in order to silence him and prevent its continued publication of documents revealing the dirty laundry of the White House.

Both knowledge has become the global public less skeptical and more realistic when it comes to the ability of the U.S. government to silence its enemies, cover their mistakes and use any measure to achieve its domain.

Hugo Chavez was always a stone in the imperial shoe. Underestimated by analysts and consultants ‘Cold War mind’ in Washington, Chavez ended the influence and domination of the United States in Latin America in less than a decade. Transformed Venezuela from a dependent country and delivered to American culture and politics to be a sovereign, free, independent, dignified and proud of its roots, its history and its Indo-Afro-American culture.He rescued the control of strategic resources not only in Venezuela, but throughout Latin America, always with the banner of social justice. He promoted regional integration and the creation of organizations such as the Union of South American Nations (UNASUR), the Bolivarian Alliance for the Peoples of Our America (ALBA) and the Community of Latin American and Caribbean States (CELAC), among others. His stand against U.S. aggression hand gave an example and an inspiration to millions around the world, who viewed with hope the revolution in Venezuela and its regional expansion.

No doubt many powerful interests in Washington and elsewhere wanted the passing of Hugo Chavez. They tried to do it in April 2002 with a coup promoted by the U.S. government that failed. Months after strong economic sabotage that almost destroyed the country’s oil industry sought to overthrow him, but failed. Year and a half later paramilitary mercenaries were sent from Colombia to assassinate him, only to be captured by Venezuelan authorities, neutralized plot. In the following years there were many attempts on his life and destabilization plans to overthrow his government, none worked. Meanwhile, Chavez’s popularity grew and his socialist project began to take root in the country.

The leaked documents from the NSA by Edward Snowden revealed that President Chavez and his government were on the list of the six main targets of U.S. intelligence since at least 2007. Just one year ago, the White House created a special intelligence mission to Venezuela that reported directly to the National Director of Intelligence, above the CIA and 15 other intelligence agencies in the United States. A special mission was completely illegal, with great resources and capabilities. There were only two other missions that style: for Iran and North Korea. Venezuela include two enemy countries was held in Washington indicator of threat posed by Hugo Chavez to U.S. power.

Chavez suffered cancer that ended his life so suddenly was weird. As explained by the current president Nicolas Maduro, his cancer was unusual, unnamed and extremely aggressive. It was organ-specific. The Chavez family had no other cancer cases, there was a genetic predisposition. It was detected in June 2011 and in less than two years, despite strong treatments, killed him.

U.S. Army declassified and obtained by AP in 1995 by the Law on Access to Information (FOIA) documents were evidence that since 1948 the Pentagon sought to create a weapon of radiation to political assassinations .

Another study of U.S. Army intelligence in 1969 confirmed that the illegal use of radiation as a weapon could cause death or serious illness in political adversaries. In other words, it was a method of murder who were actively trying.

Can you imagine if Washington since 1948 was experimenting with radiation as a weapon of political assassination, would have come this far in the twenty-first century technology.

A secret State Department cable of January 31, 1976 warned of the serious health effects caused by radioactive microwaves used by the KGB to spy on the U.S. Embassy in Moscow: “Our medical experts are of the view that prolonged exposure to microwave radioactivelevels measured at the Embassy of the United States constitute a threat to health. “ 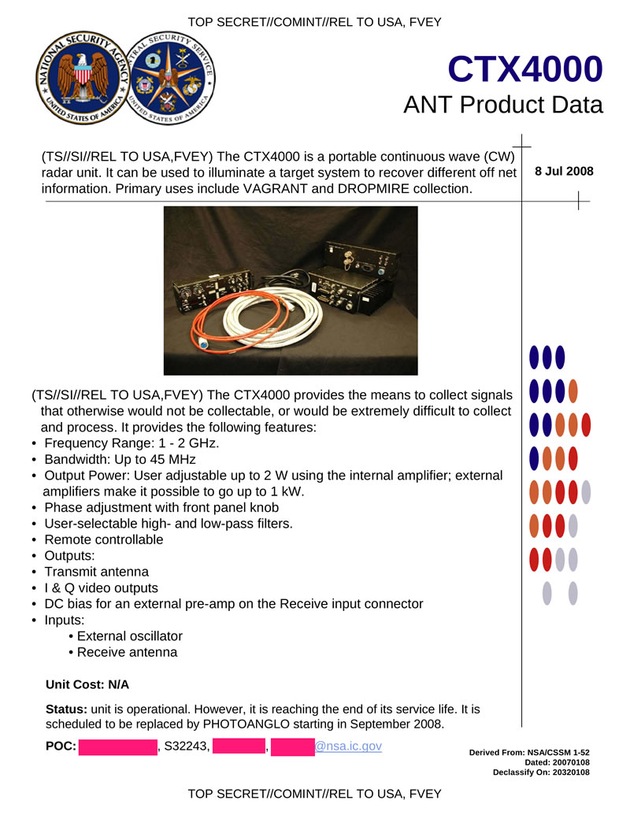 NSA filtered by Edward Snowden Documents and recently published in the German newspaper ‘Der Spiegel’ refer to a powerful team developed by the U.S. agency that issues continuous high frequency radio waves against a target to monitor and capture all your communications . According to the document-secret NSA, equipment, CTX4000, is “a portable radar unit continuous wave (CW). It can be used to illuminate a target to retrieve information out of the network. “

“The ability to collect supplies CTX4000 signals that otherwise would not be collected, or would be extremely difficult to collect and process.” The document details their capabilities, “Frequency range: 1-2 GHz; Broadband: 45 MHz, Output Power: 2W to using internal enlarger, enlarger up to 1 kW external”.

A kilowatt is a strong capacity and amount of radioactive waves. This projected against a person for a continuous period amount may cause serious harm to your health. The study of the U.S. Army in 1969 (mentioned above) on the health effects of radiation as a weapon stresses that the impact-or event desired, in other words, the death of the white-may manifest years after exposure to the agent radioactive.

Within the NSA documents published in Der Spiegel there are also details of other forms of espionage through cell phones, wifi mobile systems and networks that might also have serious health effects for whites. However, the use of a portable radar equipment that emits continuous wave high power against a person appears to be a spy mechanism could be an instrument of murder.

Hugo Chavez was the main target of NSA for years. The possibility that their spy tools have contributed to or caused his illness no longer seems as science fiction may have been a while ago.

3 thoughts on “Did The NSA Kill Hugo Chavez? (Global Research)”