If there is ever a case study about people who built up their reputation and then squandered it for first being right for all the wrong reasons, and then being wrong for the right ones, then Meredith Whitney certainly heads the list of eligible candidates. After “predicting” the great financial crisis back in 2007 by looking at some deteriorating credit trends at Citigroup, a process that many had engaged beforehand and had come to a far more dire -and just as correct – conclusion, Whitney rose to stardom for merely regurgitating a well-known meme, however since her trumpeted call was the one closest to the Lehman-Day event when it all came crashing down, it afforded her a 5 year very lucrative stint as an advisor. Said stint has now been shuttered.

The main reason for the shuttering, of course, is that in 2010 she also called an imminent “muni” cataclysm, staking her reputation once again not only on what is fundamentally obvious, but locking in a time frame: 2011. Alas, this time her “timing” luck ran out and her call was dead wrong, leading people to question her abilities, and ultimately to give up on her “advisory” services altogether. Which in some ways is a shame because Whitney was and is quite correct about the municipal default tidal wave, as Detroit and ever more municipalities have shown, and the only question is the timing.

However, as Citi’s Matt King recent showed, when it comes to stepwise, quantum leap repricings of widely held credits, the revelation is usually a very painful, sudden and very dramatic one. This can be seen nowhere better than in the default of Lehman brothers, where while the firm’s equity was slow to admit defeat it was nothing in comparison to the abject case study in denial that the Lehman bonds put in. However, as can be seen in the chart below, when it finally came, and when bondholders realized they are screwed the morning of Monday, Septembr 15 when the Lehman bankruptcy filing was fact, the move from 80 cents on the dollar to under 10 cents took place in a heartbeat. 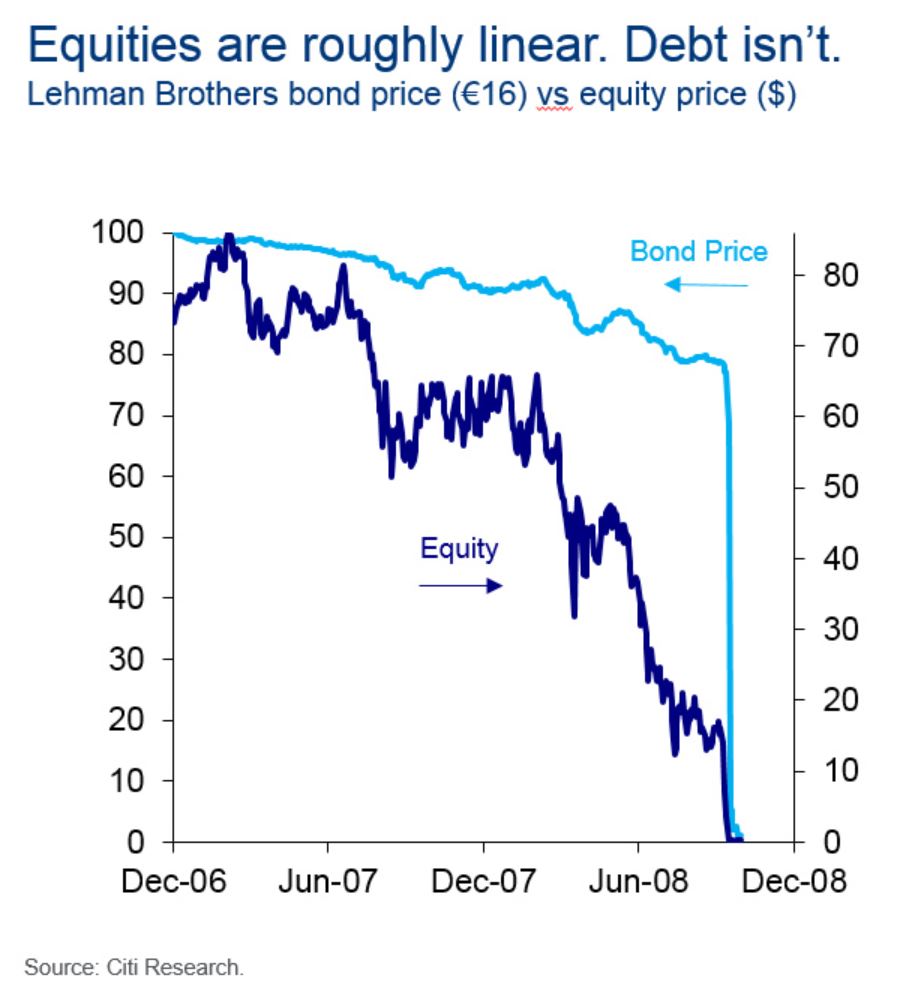 It is the same kind of violent and anguished repricing that all unsecrued creditors in the coming wave of heretofore “denialed” municipal bankruptcy filings will have to undergo. Starting with Detroit, where as Reuters reports, the recovery to pensioners, retirees and all other unsecured creditors will be…. 16 cents on the dollar!…  or less than what Greek bondholders got in the country’s latest (and certainly not final) bankruptcy.

On Friday, city financial consultant Kenneth Buckfire said he did not have to recommend to Orr that pensions for the city’s retirees be cut as a way to help Detroit navigate through debts and liabilities that total $18.5 billion.

Buckfire said it was clear that the city did not have the funds to pay the unsecured pension payouts without cutting them.

“It was a function of the mathematics,” said Buckfire, who said he did not think it was necessary for him or anyone else to recommend pension cuts to Orr.

“Are you saying it was so self-evident that no one had to say it?” asked Claude Montgomery, attorney for a committee of retirees that was created by Rhodes.

Buckfire, a Detroit native and investment banker with restructuring experience, later told the court the city plans to pay unsecured creditors, including the city’s pensioners, 16 cents on the dollar. There are about 23,500 city retirees.

One wonders by how many cents on the dollar the recovery to pensioners would increase if the New York-based Miller Buckfire were to cut their advisory fee, but that is not the point of this post (it will be of a subsequent).

What is the point, is that creditors across all products, aided and abetted by the greatest credit bubble of all time blown by Benny and the Inkjets, will find the kind of violent repricings that Lehman showed take place whenever hope dies, increasingly more prevalent. And since retirees and pensioners are ultimately creditors, this is perhaps the fastest, if certainly most brutal way, to make sure that the United Welfare States of America is finally on a path of sustainability.

The only question is how will those same retirees who have just undergone an 84 cent haircut, take it. One hopes: peacefully. Because among those whose incentive to work effectively has just been cut to zero, is also the local police force. In which case if hope once again fails, it is perhaps better not to contemplate the consequences. For both Meredith Whitney, who will eventually be proven right, and for everyone else.