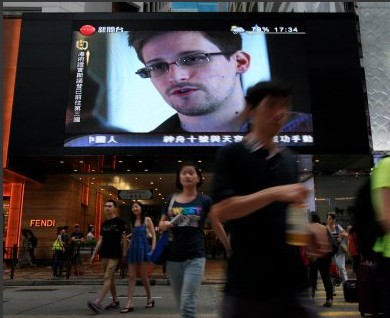 The Selling of “Snowden”

We are told, “and how” we are told, aided by every discredited media hack on the planet, that poor Snowden is flying to Russia where he will either be given “safe passage” or “considered” for asylum.

The New World Order is holding a “morality play,” and we all have tickets.

Snowden’s baggage includes, we are told, a “Wikileaks legal team” and four computers, carrying details of intelligence intercepts against Russia and China.  Please note, Russia and China are among the top four nations when it comes to international “cyber bullying,” with multi-billion dollar budgets.

The real violator, behind NSA monitoring, in control of social media, of Wikipedia, of YouTube and Google, monitoring all world mobile communications and, more importantly, in control, not just of a majority of the world’s media and entertainment but the governments of Britain, Canada, Australia, France, Germany, Italy, Greece, Turkey, the United States and dozens of others as well, is Israel.

But “Israel” doesn’t exist, not to Wikileaks, not to Snowden.  Instead we get “revelations” long in the public domain and of absolutely no consequence whatsoever.  In the intelligence community, we look on such efforts as “creating a legend.”

“Legends” are “backstories” that provide a needed “platform and capability” for the operational effectiveness of an intelligence asset.

By that standard, Assange and Snowden are intelligence assets.  They are now acting fully in concert, Snowden joined at the hip, supported and financed by Assange.   If Assange is a spy, as asserted by Zbigniew Brzezinski, is Snowden the same?

Assange came to us initially with a video exposing US abuses in Iraq.  There were worse abuses, far worse, but his video was used to “buy his way in.”  Problem is, Assange supported the war as a backer of Israel.

Assange, in fact, contacted Israeli intelligence before anything was leaked.  Israel had first “censorship rights” on every document that passed through Wiki-”leaks.”

Behind the scenes, the Murdoch empire, now partially in tatters, exposed for its own surveillance scandal that left dozens facing prison and a British government laid bare, blackmailed, coerced, certainly controlled.

In fact, Wikileaks never released anything the discredited mainstream media it claimed to revile didn’t authorize.

These are the “hapless victims” Snowden is helping.

As for Wikileaks, one wonders about their relationship with Russia, one wonders much.  Assange, the darling of Russia Today, is a very strange friend for Mr. Putin, a “friend” who has bought his way into the Russian media with “counterfeit currency,” peddling tiresome “anti-whatever,” a thin veneer over the core agenda:

Snowden, we predict, will fit in quite well.

SYRIA, WHERE ART THOU?

Not one cable or intercept, Wikileaks or Snowden, has covered the endless volumes of traffic that has to reveal how, built around Israel’s “web,” the West is now arming the same terrorist groups it claims were responsible for 9/11 and, with absolute certainty, the enemy who killed thousands of Americans in Iraq.

Oh, but have we forgotten, when the televised sniper killings of 400 Americans in Iraq hit YouTube (Google/Israel), it was later found that the video-equipped weapons were of Israeli manufacture.  You don’t remember this story?  I wonder why.

When or if Syria falls, Iraq will face civil war, Kurdistan has already announced it will leave Iraq and take the world’ largest oil field with it.  Get the picture?

So, what has Wikileaks done to “out” the criminal conspiracy against Assad, to “out” the endless backchannel traffic that ties Israel, Al Qaeda to Britain, to France and certainly to Saudi Arabia, Egypt, Turkey and Qatar?

Let’s roll the clock back.  In July 2012, Julian Assange released “the Syria files.”  Funny thing, considering Assange is the “hero of what was the Soviet Union,” Assange’s leaks to his “media partners,” read “New York Times and similar,” were broad attacks on Assad.

Not one word, not one of thousands of cables contained anything but carefully gleaned and carefully “crafted” attacks on Assad’s government.

Who is Wikileaks?  In August 2010, Veterans Today “outed” Wikileaks as an Israeli intelligence operation.

On December 6, 2010, Zbigniew Brzezinski, while on National Public Radio with Judy Woodruff, made the following points about Wikileaks and Assange:

From Veterans Today, the “outing” of Wikileaks:

The real issue is, who is feeding Wikipedia on this issue — Wiki — Wiki — WikiLeaks on this issue? They’re getting a lot of information which seems trivial, inconsequential, but some of it seems surprisingly pointed. …The very pointed references to Arab leaders could have as their objective undermining their political credibility at home, because this kind of public identification of their hostility towards Iran could actually play against them at home.

Editor’s note:  The use of the term, “pointed” is key.  This indicates two classes of information and also begins building a hypothesis to support “intent.”  If there is “intent” in the leaks, then they are an intelligence operation, not a leak.

It’s, rather, a question of whether WikiLeaks are being manipulated by interested parties that want to either complicate our relationship with other governments or want to undermine some governments, because some of these items that are being emphasized and have surfaced are very pointed.

And I wonder whether, in fact, there aren’t some operations internationally, intelligence services, that are feeding stuff to WikiLeaks, because it is a unique opportunity to embarrass us, to embarrass our position, but also to undermine our relations with particular governments.

Editor’s note: Brzezinski goes exactly there, indicating his belief that Wikileaks is tied to an intelligence agency.  This is a full and direct challenge to the credibility of Wikileaks showing no reservations whatsoever.

For example, leaving aside the personal gossip about Sarkozy or Berlusconi or Putin, the business about the Turks is clearly calculated in terms of its potential impact on disrupting the American-Turkish relationship….the top leaders, Erdogan and Davutoglu and so forth, are using some really, really, very sharp language.

JUDY WOODRUFF: But this is 250 — it’s a quarter-of-a-million documents.

JUDY WOODRUFF: How easy would it be to seed this to make sure that it was slanted a certain way?

ZBIGNIEW BRZEZINSKI: Seeding — seeding it is very easy.  I have no doubt that WikiLeaks is getting a lot of the stuff from sort of relatively unimportant sources, like the one that perhaps is identified on the air. But it may be getting stuff at the same time from interested intelligence parties who want to manipulate the process and achieve certain very specific objectives.

Editor’s note:  Brzezinski’s assertion is that “chickenfeed,” things off the news, low level “junk” intel is being “seeded” by an intelligence service to serve an agenda with “very specific objectives.”  Can anything be more clear?

STEPHEN HADLEY :  The — what we know or what has been said publicly is it looks like a data dump through a pretty junior-level person. So, in terms of that material, it looks like a data dump. Generally, in Washington, I have had the rule that, if there are two explanations, one is conspiracy and one is incompetence, you ought to go with incompetence. You will be right 90 percent of the time.

Editor’s note:  The Obama administration withdrew the AIPAC spying convictions when it was clear that Stephen Hadley would be put on the stand by the defense.  Hadley’s very close relationship with the defendants in this spy trial brings up a number of interesting questions which are not hard to answer if you read his response above.

ZBIGNIEW BRZEZINSKI: But, Steve, the other foreign intelligence services don’t have to wait for me to make that suggestion.   I think they can think of it themselves, particularly after the first instance.

We can’t help but return to what is so obvious.  Why is Russia Today promoting Wikileaks?  Wikileaks has worked tirelessly to undermine Russia’s position in Syria and, as is always the case, works tirelessly to advance the interests of Israel’s intelligence agencies.

Funny thing about Snowden, those who follow the functions of the NSA, the organization Snowden claims to be exposing, also know that the prime contractors that intercept mobile and wired telephone and internet communications for NSA.  The Israeli company, Narus, operating under a “Boeing” cover, is responsible for almost all cited abuses.

Oh, Snowden must not have known this.

Then again, the NSA/Israeli apparatus was entirely designed by the Chertoff Group, another Israeli company headed by Michael Chertoff, the former “reichsfuhrer” of the Department of Homeland Security.

When it comes to knowing “who, what and where,” Snowden doesn’t seem to know much.