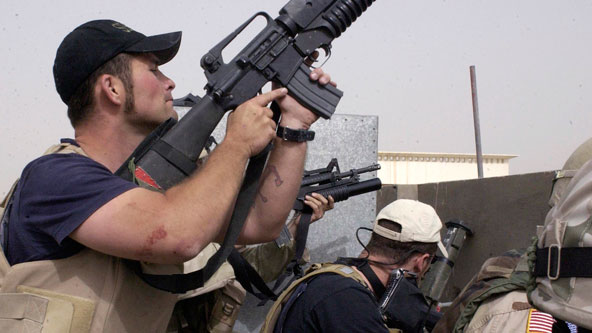 The number of contractors working in Afghanistan now vastly outnumbers American troops stationed there, according to a Congressional Research Service report. CRS, along with the Government Accountability Office, also determined that the Pentagon is unable to properly document the work these contractors are doing. And the information DOD is receiving is often unreliable and inaccurate.

Given the size of the private forces, it’s not surprising that CRS found that in recent years, the Defense Department spent more than any other agency to support contractor work.

“Over the last six fiscal years, DOD obligations for contracts performed in the Iraq and Afghanistan areas of operation were approximately $160 billion and exceeded total contract obligations of any other U.S. federal agency,” CRS found.

The CRS report comes in the wake of a recent GAO report that the United States spent $195 billion for contractor services in 2010, or twice what it spent on contractors in 2001, before the start of the war in Afghanistan.

The increase in the contractors to troop ration is yet another indication that although the vast majority of troops are leaving Afghanistan, a private army will remain in the country for years.

But the CRS and GAO reports did more than simply document how much was being spent on contractors. They also explored contractor oversight and DOD’s ability to track contractor work.

Taken together, they amount to yet another indictment of how the Pentagon deals with private workers. CRS found that the Pentagon lacked the ability to document the work each contractor is performing. It also found even when the government has information on contractors, it’s often inaccurate and doesn’t reflect the actual work being done. This leaves the Pentagon unable to determine if the hundreds of billions it’s spending are leading to effective results.

GAO found a number of faults with DOD’s contracting process, beginning with their inability to account for work being done in each branch. It attributes this problem to one that has hamstrung the Pentagon’s financial auditing process: Different branches of the military use different systems to track contractor work.

Each report found that the inability to track contractor work makes it nearly impossible for DOD to budget in an effective way. But they also made clear that failures to properly monitor contractors ultimately hurt readiness on the battlefield.

“Given current concerns over the reliability of contracting data, the information in the central database may not be sufficiently reliable for decision making at the strategic level. This lack of data makes it difficult to determine to what extent the billions of dollars spent … have contributed to achieving the mission,” CRS found.