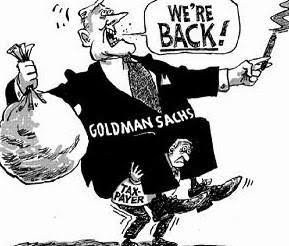 The greater story behind Mark Carney’s appointment to the Bank of England may be the completion of Goldman Sachs’ multi-tentacled takeover of the European regulatory and central banking system.

But let’s take a moment to look at the mess he is leaving behind in Canada, the home of moose, maple syrup, Jean Poutine and now colossal housing bubbles. George Osborne (who as I noted last month wants more big banks in Britain) might have recruited Carney on the basis of his “success” in Canada. But in reality he is just another Greenspan — a bubble-maker and reinflationist happy to pump the banking sector full of loose money and call it “prosperity” before the irrational exuberance runs dry, and the bubble inevitably bursts.

1 thought on “Mark Carnage: A Look At The Mess Mark Carney Is Leaving Behind In Canada”