The CDC has released a new zombie apocalypse preparedness campaign, and at one level, it almost begins to be useful. The “Preparedness 101 Zombie Apocalypse” novella is viewable online, connecting with the public through a pop culture theme — zombies — that has experienced a strong resurgence over the last few years.

The zombie novella even offers a small taste of some realistic, practical advice. Early in the novella, for example, a concerned citizen clicks on the CDC’s preparedness website and prints out a list of items needed to create an emergency preparedness kit. Those items include:

There’s only one problem with this list: There’s nothing in it for self defense against the zombies.

Here’s the cover of the novella: (http://www.cdc.gov/phpr/zombies/#/page/1) 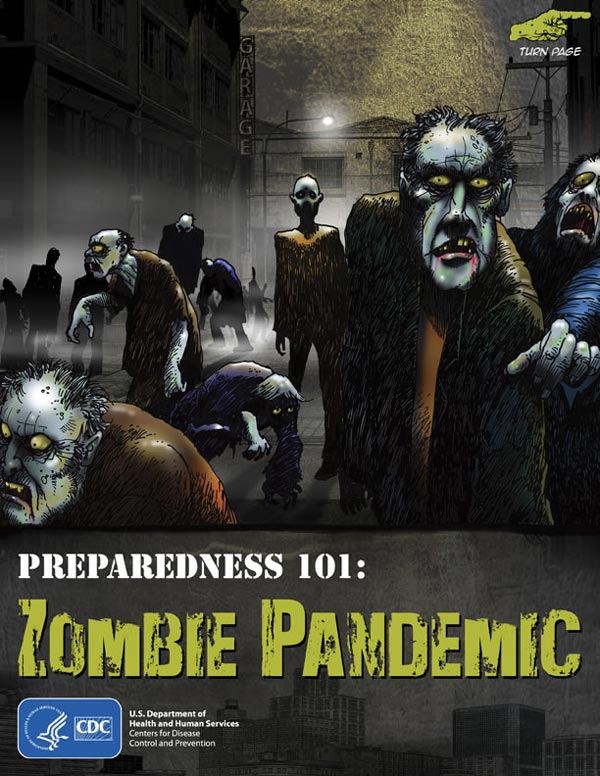 A zombie novel without a shotgun?

First off, everybody knows that if you want to stop a zombie, you need a good shotgun. A 12 gauge is preferred, and Remington pump action shotguns are very, very reliable. However, I kind of take a liking to the Benelli M4 autoloader (http://www.benelliusa.com/shotguns/benelli-m4.php), which can blast six zombies in less than three seconds.

There are no shotguns, pistols or any other tools of self defense even mentioned in the CDC’s novella. The entire message is “wait for the government to save you.”

Instead of defending yourself, the novel suggests you make your way to what is essentially a “FEMA camp” — an area surrounded by wire fencing, where masses of people sleep on cots in a gymnasium-style staging area.

The zombie apocalypse is halted, predictably, by a vaccine. Yep, the CDC’s amazing scientists are depicted as developing a miracle vaccine that halts the zombie infection and saves the world. There’s no mention of mercury side effects, or the effects of chemical adjuvants that cause convulsions, paralysis and even autism in some people. That little factoid is completely left out of this fiction novel. There’s also no mention of how the drug companies have already been caught faking their vaccine trials, spiking blood samples with antibodies to try to make them appear more effective than they really are (http://www.naturalnews.com/036417_Glaxo_Merck_fraud.html).

The CDC’s world-saving vaccines are, of course, to be injected into all the people in the FEMA camp. But not before an attack wave by the zombies, fended off by the U.S. military.

In the end, the main character of the novella suddenly awakens. The whole thing was a “bad dream” (kind of like all the fiction surrounding the H5N1 hysteria pushed by the CDC and the WHO). But the character remembers one thing: It’s important to be prepared.

Except he still has no shotgun.

On the final page of the novella, the CDC recommends a list of supplies that include politically correct preparedness items such as baby diapers and extra batteries for your hearing aid. You’re also supposed to have a whistle and a copy of your health insurance policy. (Yep, because paperwork is always important in a collapsing police state.)

The list does NOT include many of the basics that will really save your life in an emergency: A portable water filter, colloidal silver, an emergency tourniquet, a large utility knife or combat knife, and a well-oiled firearm with tritium night sights. Nope, because the CDC doesn’t want to encourage anyone to take care of themselves. You’re supposed to just report to the local FEMA camp, take your vaccine shots, and rely on the government to save you. That’s the message from the CDC.

This novella is, of course, pure government propaganda. More importantly, it’s a recipe for being “culled” out of the human population. That’s the point of the FEMA camps, of course, which are heavily stocked with human incinerator coffins. You can see the pictures (and the patent) at: http://www.naturalnews.com/036951_financial_collapse_optimism_silver_…

Real survivors carry tactical flashlights (www.SupplySource.com) and own survival garden seeds. They are decisive, self-reliant and determined to make it through almost anything.

The CDC doesn’t teach real survival skills. It teaches a watered-down fairy tale version of “polite” survival… survival for people who live in denial of the real world. If you really want to survive a zombie apocalypse, don’t listen to the CDC. They’ll get you killed. For real preparedness, read websites like this one (NaturalNews.com) or James Wesley Rawles’ site www.SurvivalBlog.com

Learn about survival skills through online courses like the ones you’ll find at http://programs.naturalnews.com

P.S. The Natural News Store is opening in 30 days, and we’ll be offering storable organic foods at a healthy discount. The website will be http://store.naturalnews.com

The bottom line? The CDC’s list is really just “preparedness for people who want to die.” If you want to actually LIVE through a crisis, or a pandemic, or even a zombie apocalypse, step up to real preparedness which inevitably requires a firearm plus the skills to safely and effectively use it in an encounter with violent attackers.

Did you know that gun sales are skyrocketing through the roof? 16 million gun sale background checks were performed by the FBI in 2011 (http://www.cnbc.com/id/48943733), and that number may exceed 20 million this year.

If you buy a firearm, make sure you get a firearm that actually works in the field. There’s a lot of stuff on the market that falls apart or jams when you need it most. My firearms instructor told me the two most reliable models he’s seen across thousands of students are Glock (http://us.glock.com/) and M&P (www.Smith-Wesson.com). If you get a Glock, go with “Gen 3” because it’s proven in the field and spare parts are easily available. Many firearms instructors swear by the Glock 19, which turns out to be a perfectly balanced firearm for most women as well as men.

Do you know why senior citizens are buying firearms like crazy these days? Because crime is UP thanks to the economy being gutted by government policies that seem intent on destroying the jobs base in America. At the same time, police forces are being downsized. So you’ve got more crime, but fewer police on the streets. That means more innocent victims unless you can protect yourself. The great advantage with a firearm such as a Glock 19 is that even a small, elderly woman can handle it and thereby give herself a mechanism for instant defense against much larger muggers, murderers or other violent criminals.

Even liberals are buying guns these days because they want to be safe, even if they don’t “like” guns. I don’t particularly like guns, either. I just like being safe and self-reliant. A firearm just happens to be the most effective way to accomplish that. I’m FAR more interested in seeds, permaculture, superfoods, philosophy and natural living, but in order to protect all those things — plus my farm and my family — I also own firearms.

Firearms are “force equalizers,” which is why the government doesn’t want citizens to have them… because it would make the citizens “equal” in power to the government. Watch my video here for an explanation of the “monopoly of violence” being pushed by the government today: