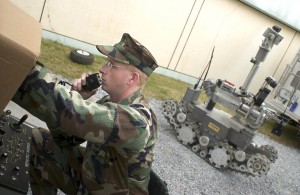 Last year I reported on the Pentagon’s 1033 Program, wherein local law enforcement agencies can obtain surplus military hardware through a website, only having to pay to pick up the equipment.

Now, according to the Defense Logistics Agency (DLA), law enforcement will be even further militarized through the use of hundreds of military robots acquired by the Department of Defense over the past decade.

According to the head of the eastern team of DLA’s disposition services office, Dan Arnold, the older and more heavily used items will likely be robots for explosive ordnance disposal and surveillance, although some of the hardware is nearly brand new and never been deployed overseas.

According to National Defense, Arnold said to the attendees of the GovSec conference in Washington, D.C., that these robots are just one instance of the surplus equipment that will likely become available as the conflict in Afghanistan supposedly winds down.

These items will be available to absolutely any law enforcement agency, be they federal, state or local, so long as they have a counter-narcotics or counterterrorism mission of some kind.

Arnold said that they are still working out the final details with the Army’s Tank Automotive, Research and Development Command out of Warren, Michigan.

He said that they expect these surplus robots to be available as soon as this summer.

The 1033 Program is all about making it as easy as humanly possible for law enforcement agencies to get their hands on military equipment.

They have a website where agencies can procure everything from a folding chair to a helicopter to an armored personnel carrier to assault rifles to fixed-wing aircraft to night vision goggles to boats.

Similarly, through the 1706 Program, non-law enforcement agencies can acquire equipment as well.

Some of the equipment isn’t quite as exciting as a military helicopter, like office equipment, refrigerators, furniture, exercise equipment and other items which were used on the insular communities that are military bases.

“If your mind can think of it, it comes through our agency,” Arnold boasted.

Arnold said that law enforcement agencies can procure practically brand new rifles through the 1033 Program, which they then can convert to law enforcement specifications starting at around $40 per rifle.

There are a few catches to this program, but not many considering that local law enforcement is essentially getting free military hardware.

The agency receiving the goods must accept the equipment as-is and arrange to pick up the items within a two week period.

While this makes it so equipment made available on a base in Japan will likely not be snatched up by a law enforcement agency in Oklahoma (unless they really wanted it), this is offset by the fact that the 1033 Program’s website allows agencies to conduct regional searches in order to find bases close to them.

Recipients are prohibited from selling, throwing away or trading any items with either defensive or offensive capabilities, although if they decide they no longer require the goods all they have to do is return them to the DLA.

During the last fiscal year alone, the office responsible for the program, run out of Battle Creek, Michigan, dealt with over 115,000 requests.

Arnold said that they distributed some $498 million worth of military equipment and over 11,000 agencies across all 50 states have signed up to take part in the program.

Currently, there is such a high demand for aircraft that they had to create a waiting list, while they have an excess of surplus of Humvees so large that they are actually crushing them for scrap metal.

The point I think that you should take home from all of this is that our domestic law enforcement here in the United States will only continue to become more militaristic as the war profiteers continue to push for perpetual wars, thus creating the surplus military equipment.

Furthermore, the tactics and approaches used by the military abroad are often later appropriated here at home and when one considers all of these issues together, along with the fact that the Department of Homeland Security is also jumping on military technology, it doesn’t look like this trend will be reversed any time soon.

Obviously I hope this is not the case but the so-called “homeland security” industry and its sister surveillance sector only become increasingly lucrative as time goes on.