Merkel: “We must return together to an independent central-bank policy and to a policy of reason, otherwise we will be in exactly the same situation in 10 years’ time.”

Only this time it will only take about one year until everything falls apart and “the same situation” will also be much worse than before. An economic/financial disaster of epic proportions: The Greatest Depression.

In a speech on Tuesday in Berlin, Chancellor Angela Merkel expressed ‘great skepticism’ over the clout of central banks and suggested their aggressive moves in Europe, the U.S. and the U.K. might backfire. She is shown here at a rally later in Saarbrücken, Germany, for European Parliamentary elections. AFP/Getty Images

German Chancellor Angela Merkel, in a rare public rebuke of central banks, suggested the European Central Bank and its counterparts in the U.S. and Britain have gone too far in fighting the financial crisis and may be laying the groundwork for another financial blowup.

“I view with great skepticism the powers of the Fed, for example, and also how, within Europe, the Bank of England has carved out its own small line,” Ms. Merkel said in a speech in Berlin. “We must return together to an independent central-bank policy and to a policy of reason, otherwise we will be in exactly the same situation in 10 years’ time.” (Read excerpts of the speech.)

Ms. Merkel also said the ECB “bowed somewhat to international pressure” when it said last month it plans to buy €60 billion ($85 billion) in corporate bonds — a move that is modest in comparison to asset-buying by its counterparts, the U.S. Federal Reserve and the Bank of England. Details are to be unveiled by the ECB’s president, Jean-Claude Trichet, Thursday.

The public criticism is unusual — and not only because German politicians rarely talk harshly about central banks in public. When politicians around the world do criticize their central banks, they almost always gripe that they are too tightfisted.

The conservative German leader’s comments came as Europe’s statistical agency reported that unemployment in the 16 countries that share the euro rose to 9.2% in April — the highest level since September 1999 and still below the 11.5% that the European Commission forecasts for 2010.

However, the economic straits of countries within the euro zone vary widely. Germany’s unemployment rate of 7.7%, for instance, contrasts with 18.8% in Spain, where a collapse in the construction industry that was driving the economy has pushed unemployment to the highest in the euro zone.

It isn’t clear what triggered Ms. Merkel’s remarks, which came in a prepared speech. The ECB has been markedly less aggressive than the Fed or the Bank of England, particularly in moving beyond cuts in short-term interest rates to buy bonds to boost economic activity. However, German officials traditionally have been on the more conservative end of the central bankers’ spectrum, partly because the country’s hyperinflation of the 1920s is seared into people’s memories. 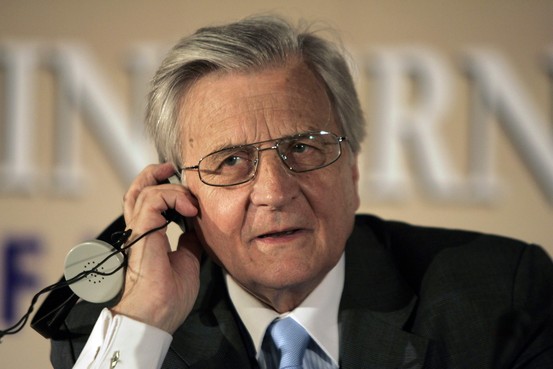 The ECB, the Fed and the Bank of England are increasingly vulnerable to criticism because they have played such a prominent role and crossed so many traditional lines in the past several months — even though they do appear to have steered their economies away from a repeat of the Great Depression. Neither the ECB, the Fed nor the Bank of England had any comment on Ms. Merkel’s remarks.

Her tough comments about the extent to which the central banks are intervening in the economy also come amid attacks on her by some in her conservative base for putting €1.5 billion of taxpayer money into a deal to shield Opel from parent company General Motors Corp.’s bankruptcy-protection filing.

Ms. Merkel’s critique jibes with statements from Axel Weber, the head of Germany’s central bank and a member of the ECB’s 22-person Governing Council. He has warned that too-loose monetary policy could fuel future inflation. Mr. Weber was among the body’s most vocal skeptics on asset purchases before the bond-buying program, reservations that were also shared by Jürgen Stark, another German on the ECB council. In a May 12 speech, Mr. Weber warned that overly generous monetary policy had helped build asset-price bubbles in the past.

In contrast, Athanasios Orphanides, the former Fed economist who now heads the Cypriot central bank, has been a vocal proponent of aggressive ECB policy. And many private-sector economists contend the ECB’s response to the global recession has been too cautious. The ECB cut its key rate to a record low of 1% in May. Mr. Trichet hasn’t ruled out further cuts, but most economists expect the central bank to stand pat Thursday and foresee the rate remaining at 1% for the rest of this year. The Fed cut its analogous rate nearly to zero in December and has said it will keep it there for some time.

Although the administration of President Barack Obama has carefully avoided criticizing the Fed, Republicans and Democrats in Congress have questioned the wisdom of the Fed’s power and its governance as they contemplate far-reaching changes to the nation’s financial regulatory structure. The senior Republican on the Senate Banking Committee, Richard Shelby of Alabama, recently asserted that “an inherent web of conflicts is built into the DNA of the Fed as it now exists,” a reference to commercial bankers’ role in overseeing the Fed’s 12 regional banks.

Some private economists — and a few inside the Fed — say the Fed’s aggressiveness is increasing the risks of an outbreak of inflation and creating the unwelcome perception that it will bail out big financial institutions when they take big risks that turn out badly.
-Nicholas Winning in London and Jon Hilsenrath in Washington contributed to this article.

Write to Joellen Perry at joellen.perry@wsj.com